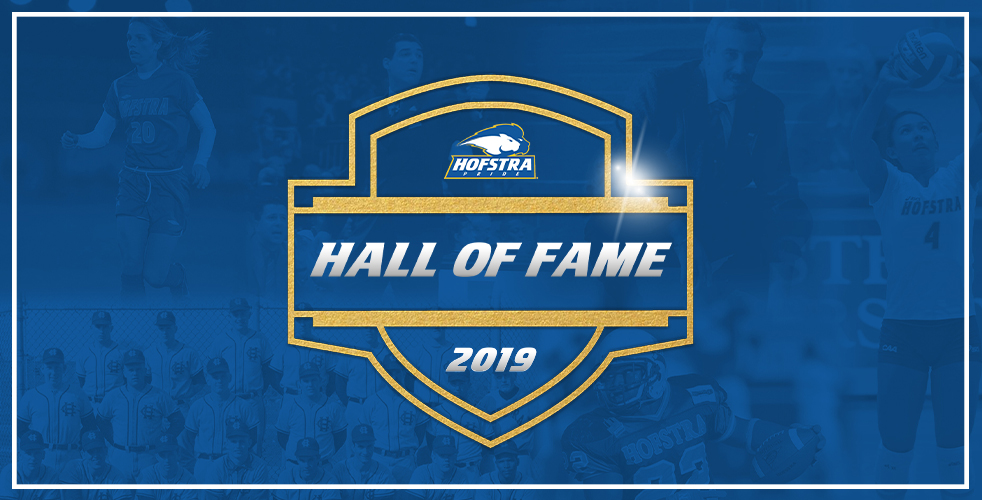 The Hofstra University Department of Athletics is pleased to announce the Hall of Fame Class of 2019. The class includes five individuals and one team. The group will be inducted at during the 2019 Hofstra Pride Athletics Hall of Fame and Golf Outing, which will take place Monday, June 17, 2019 at the Huntington Crescent Club.

“It is with great pleasure that we announce the Hofstra Athletics Hall of Fame Class of 2019,” said Director of Athletics Rick Cole Jr.“The five individuals and one team embody Hofstra Pride and further enhance an already-impressive Hall of Fame membership. We look forward to a great night celebrating their outstanding accomplishments in June.”


With this class, the Hofstra Athletics Hall of Fame will include 104 individuals and eight teams. To reserve your seat at the Hall of Fame Dinner, contact the Athletic Development Office at (516) 463-4919 or prideclub@hofstra.edu.

Larry Bloom – A long-time administrator in the Hofstra Department of Athletics, Bloom served as the director of sports facilities from 1987 until his retirement in 2006. During his tenure he oversaw the construction of the David S. Mack Sports and Exhibition Complex and the David S. Mack Fitness Center, the renovation of Joseph M. Margiotta Hall and James M. Shuart Stadium, and the construction of the Hofstra Soccer Stadium. Under his direction gross revenue from facility rentals grew to more than $1 million dollars annually. Following his retirement, Bloom coordinated the bidding and hosting of the 2008 Presidential Debate at Hofstra at the request of Hofstra President Stuart Rabinowitz.

Trevor Dimmie – A football student-athlete from 2000 to 2003, Dimmie holds Hofstra Football records for most rushing yards in a career (3,622) and season (1,319). He also has the record for most rushing yards in a quarter (129), as well as most rushing attempts in a season (265) and in a career (739). Dimmie also posted 19 100-yard rushing games during his tenure. The Tarrytown, New York, native was an I-AA Independent All-Star as a freshman in 2000 after rushing for 1,319 yards with six touchdowns. He ranked 21st in the nation in rushing and set a school freshman record with 235 yards at Cal Poly. Dimmie then earned third team All-Atlantic 10 accolades as a sophomore by rushing for 948 yards and scoring 11 touchdowns. During his junior year Dimmie had 656 yards and six touchdowns, and broke the school rushing record. He added to his mark as a senior with 699 yards and five scores, earning the Coca-Cola Outstanding Senior Award.

Shellane Ogoshi – A volleyball student-athlete from 2004 to 2007, Ogoshi is one of the most decorated student-athletes in program history. A native of Honolulu, Hawaii, Ogoshi was the Colonial Athletic Association Rookie of the Year in 2004, the CAA Player and Setter of the Year in 2005, and the CAA Setter of the Year in 2006. She was also a three-time All-CAA First Team selection and was named to the CAA Silver Anniversary Team. An AVCA All-Region pick in 2005, Ogoshi recorded a program-best 4,597 assists during her career and ranks second at Hofstra with 1,660 digs. She ranks fifth all-time in CAA history in assists and is 10th in digs. Ogoshi was part of the Pride’s 2006 CAA Championship team that won the program’s first-ever NCAA Tournament match. In addition to her outstanding on-court performances, Ogoshi also excelled in the classroom and was a two-time CoSIDA Academic All-District selection. Her No. 4 jersey was retired in 2008.

Sue Weber – A women’s soccer student-athlete from 2005 to 2007, she helped the Pride to Colonial Athletic Association Championships and NCAA Tournament berths in 2005 and 2007. Weber became the first player in program history to earn All-America honors from the National Soccer Coaches Association of America (NSCAA) in 2005, and then earned the honor once again in 2007. The Islip, New York, native was named the CAA Defensive Player of the Year in each of her three seasons at Hofstra and was the CAA Championship Most Outstanding Player in 2005 and 2007. She helped the Pride to a then school-record 18 wins as a senior that included the Pride’s first-ever NCAA Tournament win. Hofstra also set a school record for shutouts in 2007 with 12 including a program best seven consecutive clean sheets. Weber also excelled in the classroom, as she was a 2007 CoSIDA Academic All-American and a two-time Academic All-District selection. Her No. 20 jersey was retired in 2008.

Jay Wright – Hofstra’s men’s basketball coach from 1994 to 2001, Wright built the then-Flying Dutchmen into the premier team of the America East by the end of his tenure. He posted an overall record of 122-85, but during his final three seasons was 77-22 and made three postseason appearances. In 1998-99 Hofstra posted a 22-10 record and was selected to play in the National Invitation Tournament. Wright coached Hofstra to a 24-7 mark in 1999-00 that included an America East Championship and the program’s first NCAA Tournament appearance since 1977. Hofstra repeated as America East champs and NCAA Tournament participants in 2000-01 with a 26-5 record. Wright earned America East Coach of the Year honors in each of his final two seasons and was the Metropolitan Basketball Writers Association Coach of the Year in 2001. During his tenure, Wright coached Hofstra Athletics Hall of Fame members Craig “Speedy” Claxton and Norman Richardson. Wright will be a two-time Hall of Fame inductee as he was enshrined in 2015 as part of the 1999-00 team.