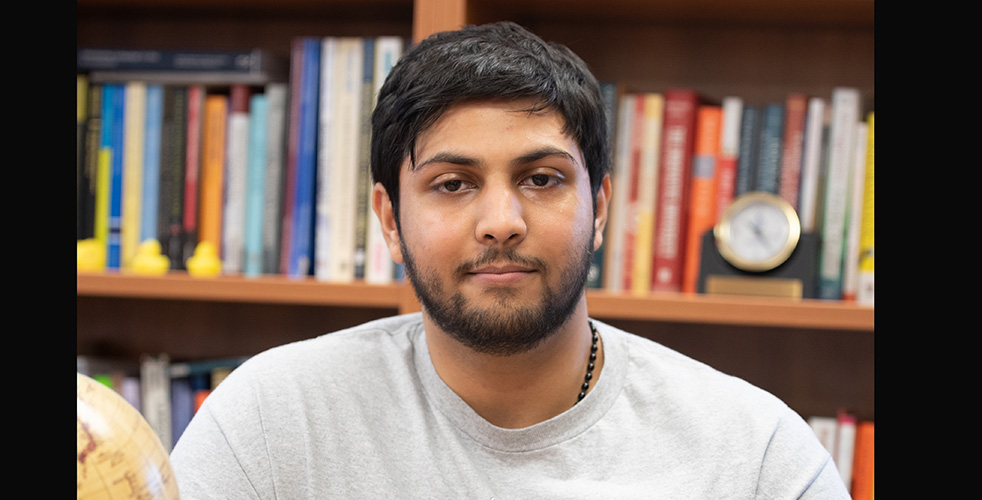 Gurkamal Dadra ‘21, an anthropology major from Bellmore, NY, is one of 844 American undergraduate students from 335 colleges and universities across the United States selected to receive the prestigious Benjamin A. Gilman International Scholarship to study or intern abroad.  The Congressionally-funded scholarship will allow Dadra to study in Kyrgyzstan through a University of Montana program during the summer of 2019.

Dadra, a first-generation American, is fluent in Hindi and Punjabi and can converse in French, Urdu and Spanish. He is enrolled in LEAP – Hofstra’s Legal Education Acceleration Program – a six-year combined BA/JD program.

Sharryn Kasmir, chair of Hofstra’s Anthropology program, explained that Dadra’s research abroad will focus on the practice of Islam in the former Soviet republic of Kyrgyzstan. She described him as “an exceptional student. He’s self-motivated and curious about the world.”

Kyrgyzstan is a Central Asian country with a primarily Islamic population. Dadra describes Kyrgyzstan as“the new great game” in the region, with many different nations, such as Turkey and Saudi Arabia, trying to exert influence. “While the country was part of the Soviet Union the practice of Islam was suppressed,” Dadra explained. “When the curtain was lifted, the religion experienced a resurgence. Religion has become more a part of the cultural identity. That is what I’ll be studying.”

Dadra, who is minoring in religion, said that while he was growing up Punjabi in Bellmore, he was the only kid among his friends who was not Catholic or Jewish. “But I would accept invitations from them to attend Catholic mass or Passover dinner. Punjab, the state in India that my family is from, is a very diverse region, so I think I’m naturally curious about other cultures and faiths.”

During the January intercession, Dadra will be interning at the New Sanctuary Coalition (NSC), an opportunity that he secured through Professor Sophie Hawkins from the Department of Religion. Dadra will be working full-time at the Pro Se Clinic, housed at New York University Law School. NSC helps immigrants identify ways to get relief from deportation and detention; access immigration-related benefits; understand their rights so they can fight their case; apply for asylum; and prepare for court appearances or interviews. For his internship, Dadra was recently awarded aninaugural Transformative Learning Grant from the HofstraCollege of Liberal Arts and Sciences (HCLAS). Dadra also worked for NSC this past summer.

In his application for the HCLAS grant, Dadra wrote, “I am committed to becoming a lawyer to defend the rights of the marginalized. … Being the child of immigrants and having seen the brokenness of the immigration system first hand I want to devote my career to reforming it and helping others navigate its complexities.”

He said, “No matter what side of the aisle you are on politically, I think we can all agree the immigration system in the US is flawed and needs to be fixed.” When he worked for NSC over the summer, he sat in on approximately 3-4 court cases a week and was very moved by the desperate plight of people to stay in the US. “I worked with them to fill out applications and provided moral support in the courtroom. Sometimes just letting people know that someone is there on their side is a big help.”

Dadra says beyond earning his law degree, he would not want to rule out a career in diplomacy. “I’ve always been interested in international relations and how people from different parts of the world interact with each other. After I earn my law degree I’d want to see how I could apply that in a way to bridge cultures – whether it’s through dialogue or even simply over a meal.”

The Gilman Program broadens the U.S. student population studying and interning abroad by providing scholarships to outstanding undergraduate Pell Grant recipients who, due to financial constraints, might not otherwise study abroad.  Since the program’s establishment in 2001,over 1,300 U.S. institutions have sent more than 28,000 Gilman scholars who represent the rich diversity of the United States to 145 countries around the globe.

Dadra is thankful to Dr. Neil Donahue, Vice Provost for Undergraduate Academic Affairs, who assisted with his application to the Gilman Program. “Dean Donahue was a tremendous help. He was with me every step of the process and answered all my questions, no matter how trivial they were. It was super easy to talk with him, and he read every draft of my essay to make sure it was ready to be submitted. I sent him an email over the summer, only half expecting a response. But he was very quick to answer, and on board as soon as he heard my project proposal.”

Students should visit Hofstra’s Scholarship Nexus and contact Dean Donahue if they are interested in applying for the Gilman Scholarship, a Fulbright Grant or learning about other highly selective academic opportunities.

All Paws on Deck
Hofstra Goes to Washington