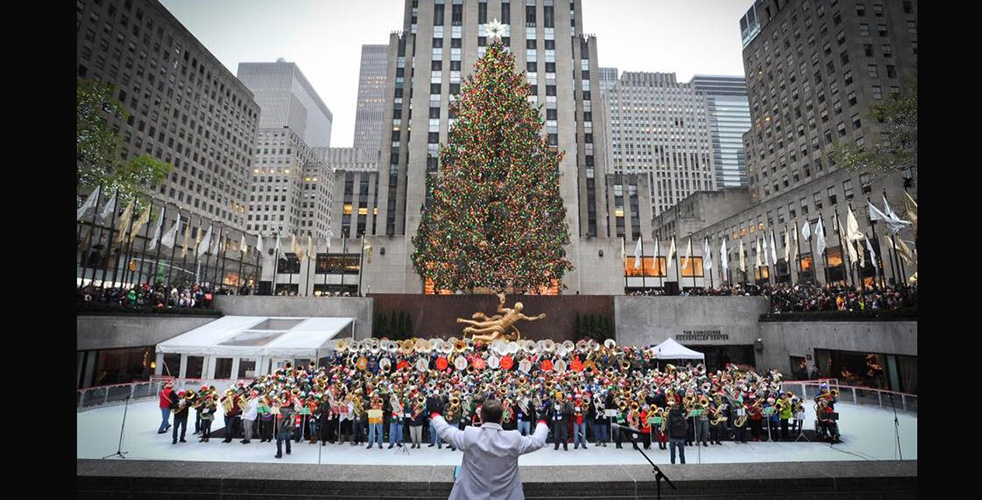 Hundreds of tuba and euphonium players, including students and alumni from Hofstra University, gathered at Rockefeller Center on December 9 to take part in the 45th annual TubaChristmas Concert. The performance is one of more than 300 that take place around the country to highlight the beautiful sounds of the mass tuba choir. Hofstra Professor Michael Salzman has been a participant in TubaChristmas every year since 1975,and he is the coordinator and master of ceremonies of the concert at Rockefeller Center.

TubaChristmas was conceived and founded by the late Harvey G. Phillips in 1974 as a tribute to his teacher, William J. Bell. Born in 1902 on Christmas day, Bell was one of the premier tuba players of the 20th century. He performed with John Philip Sousa, the NBC Symphony Orchestra, the New York Philharmonic and the Cincinnati Symphony Orchestra.

Professor Salzman, a former student of Harvey Phillips’, says he is proud to help carry on this tradition of playing Christmas carols at Rockefeller Center. He said in a past interview, “The tuba is a beautiful sounding instrument. Its deep resonant tone is similar to that of the bass voice, rich and robust.  It’s difficult to explain, but playing the tuba brings me, and most tuba players, an enormous amount of pleasure.  My students laugh, but they have come to expect me to say, “I really love playing the tuba” just about every time I pick it up.  It’s actually very rare to find a tuba player who doesn’t feel the same way.”