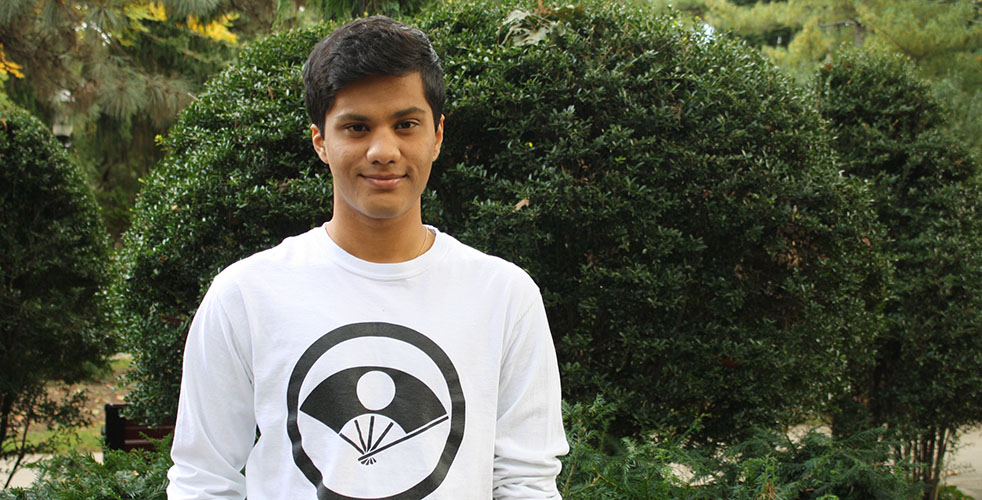 Rishab Bhatnagar, a senior majoring in Japanese and pre-health studies, is one of nine students from around the country to advance to this month’s finals of the J.LIVE Talk competition at George Washington University in Washington, DC.

J.LIVE – Japanese Learning Inspired Vision and Engagement – is a national college-level language speech competition that emphasizes a comprehensive range of communication skills. Bhatnagar will give a presentation similar to a TED talk on cultural appropriation as it pertains to kimonos, and under what circumstances it is appropriate public attire for people outside of Japanese society. Top awards include a chance to study abroad in Japan, as well as cash prizes. The competition will be held on Sunday, Nov. 11.

Outside of classes, Bhatnagar serves as president of Hofstra’s Nippon Culture Society, an intercultural organization on campus that celebrates Japanese culture. Weekly events include activities like tea ceremonies, calligraphy, and origami.

Bhatnagar’s interest in Japan and its culture was sparked as a little boy taking martial arts classes. But he only began studying the language at Hofstra. “I had been passionate about Japanese culture since the second grade when I started taking martial arts classes,” he said “When I began my freshman year at Hofstra, I could finish my language requirement with one semester of Spanish, or start from the beginning with Japanese. I chose to study Japanese and have never looked back.”

The son of a physician, Bhatnagar, who lives in Great Neck, NY, said while pairing majors in Japanese and  health studies was not originally part of his plans, the two disciplines have complemented each other.

“I enjoy the problem-solving aspects of learning another language,” he said. “Psychologically it’s very helpful – it gets you using both sides of your brain. And there is a simplicity and intense beauty to Japanese that I appreciate.”

The summer before his sophomore year, he took advantage of the study abroad program to Japan. He returned to the country on his own the following two summers.

“I had faith in my Japanese skills. My classes and professors prepared me well,” he said. It’s a very safe country, and anything I didn’t know I learned along the way.”

Bhatnagar ‘19 is hoping to return to Japan to pursue a master’s degree in health science or possibly attend medical school. “I really love learning about the body and want to work in a field where I can help people,” he said. He sees his fluency in Japanese as a means of being able to treat people of different cultures.