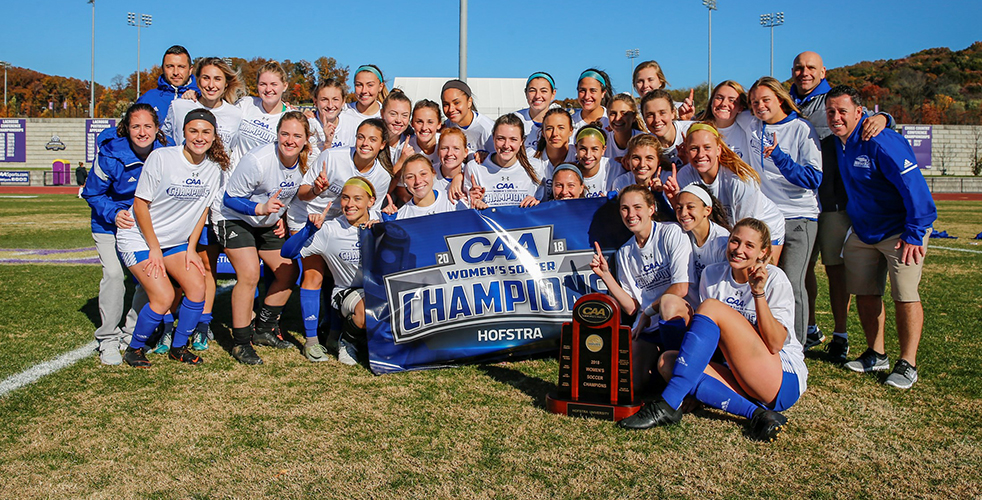 The Hofstra University Women’s Soccer team will travel to No. 4 seed Boston College for the first round of the 2018 NCAA Championship. Game time will be 7 p.m. on Friday, November 9, at the Newton Soccer Field.

The Pride (15-5-1, 6-2-1 Colonial Athletic Association) earned the CAA’s automatic bid to the NCAA Tournament this past Saturday, defeating top-seeded James Madison, 2-1, in Harrisonburg, Virginia, to take home the CAA title for the second time in as many years and fifth time overall.

The NCAA appearance is Hofstra’s seventh in program history and the third in the past four seasons. Hofstra is 2-6-1 all-time in NCAA Tournament play. The Pride has played Boston College twice in the NCAA Tournament, dropping a 3-1 decision in the 2010 second round followed by a 2-0 loss in the 2012 first round. The Pride is 0-4 all-time versus the Eagles.

Hofstra will enter the NCAA Championship on a six-game win streak and a seven-game unbeaten streak. The Pride won all three CAA Championship games by shutout and has not allowed a goal in four games.

Boston College, which is ranked 19th in the most recent United Soccer Coaches Poll, is 14-4-1 overall this season. The Eagles lost in the Atlantic Coast Conference Quarterfinals to Clemson in their last outing.