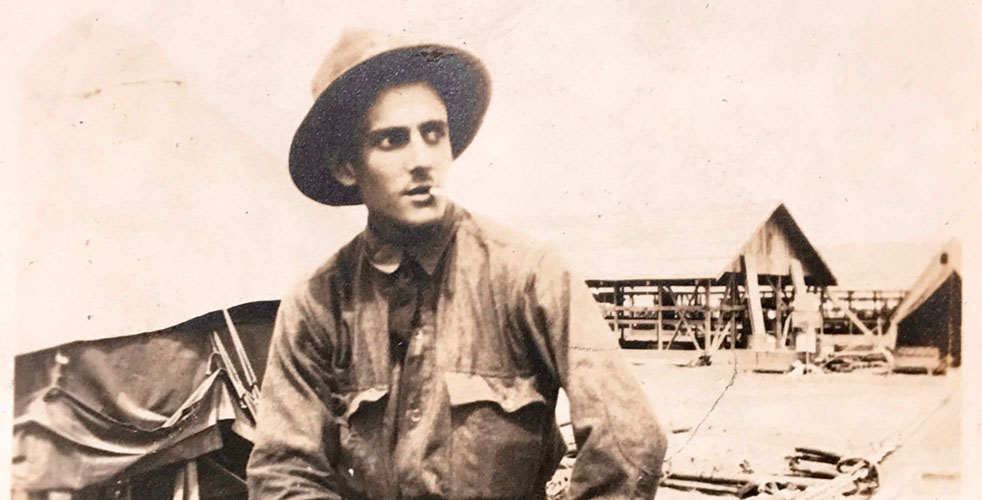 The devastation of WWI as seen through the eyes of an American soldier is the subject of 100 Years in 500 Days by Isaac Rathbone ‘00. Most of text of this original play is lifted directly from the journal of Rathbone’s great-grandfather, Carl J. Michels, who served in the trenches of France and Belgium before he was severely wounded and sent to recuperate in England. A cast of Hofstra faculty and students will perform the play this Thursday, November 8, 7:30 p.m. at The Helene Fortunoff Theater, Monroe Lecture Center, South Campus.

The world premiere of 100 Years in 500 Days, directed by Professor of Drama Cindy Rosenthal, is part of the November 7-9 conference Artistic Expressions and the Great War, which looks at how art forms – literature, the performing arts, and the visual arts – were transformed by the advent of WWI. The conference, organized by History Professor Sally Charnow, features panels on propaganda, Spiritism, poetry, heroic imagination, war and the Avant-Garde and more. Sarah Cole, Parr Professor of English and Comparative Literature and dean of Humanities at Columbia University, will present the keynote address on Wednesday, November 7, at 5 p.m.  She is the author of two books: At the Violet Hour: Modernism and Violence in England and Ireland (Oxford, Modernist Literature and Culture series, 2012) and Modernism, Male Friendship, and the First World War (Cambridge, 2003). Most conference events are scheduled to take place at the Plaza Rooms of the Sondra and David S. Mack Student Center, North Campus.

When Rathbone first learned about the conference, he believed it would be the perfect forum to debut 100 Years in 500 Days. The play is not Rathbone’s first historical drama to be produced for the Hofstra stage – Undeclared History about the protests of the 1960s and March of the Bonus Army, another WWI drama, were also performed as part of university events. However, 100 Years in 500 Days is the most personal. His great-grandfather’s journal was discovered in the late 1980s by Rathbone’s grandmother. She transcribed and photocopied it, and shared it with her children. “As I became more interested in history and dramatizing WWI stories, I read it and found it to be a fascinating piece of research,” says Rathbone. “The more time I spent with it, my great-grandfather’s journey become clearer, and I discovered there was a character arc to it.”

The title of the work reflects the emotional and physical suffering Rathbone’s great-grandfather undergoes in less than two years. Originally from upstate New York, he trained in South Carolina before heading to combat overseas. “Roughly the journal covers from August 1917-April 1919,” explains Rathbone. “The first entries sound like that of a 22-year-old – he’s excited and enjoying basic training. By the end, his voice is full of pain and darkness and also a certain degree of healing.”

The cast is made up of six actors, each playing a different voice of Rathbone’s great-grandfather. One is his young, carefree voice. Another is the new soldier adapting to military life. And another is the one who been transformed by military combat. “This isn’t a traditional drama,” Rathbone says. “Each actor brings a different a different side of my great-grandfather to life, so by the end we’ve painted a full portrait of an American soldier. The dialogue is his words. Rather than inventing a plot or re-imagining or interpreting what might have been, I let his journal be the guiding force of the play.”

Admission to 100 Years in 500 Days is free. With the exception of meals, registration for Artistic Expressions and the Great War is also free and open to the public. For more information, contact the Hofstra Cultural Center at (516) 463-5669.