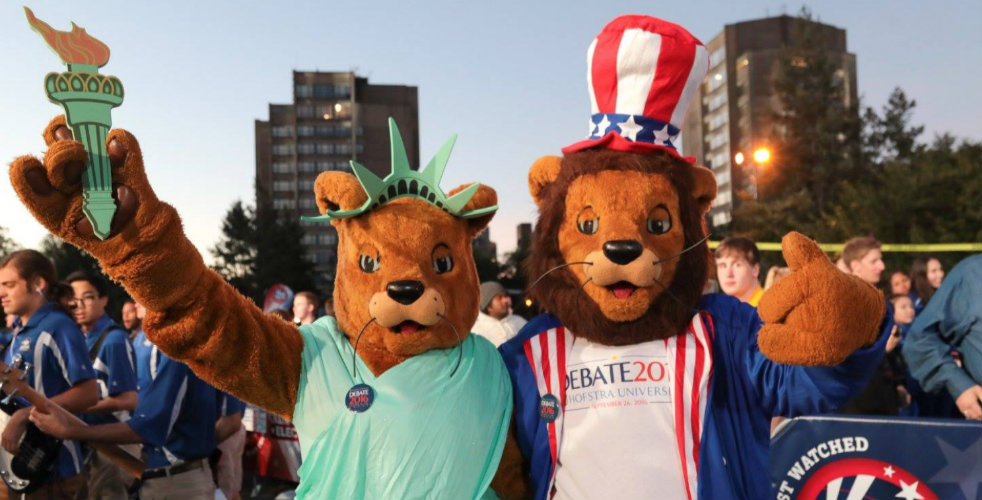 Hofstra University will host an Election Night Watch Party on Tuesday, November 6 from 7 p.m. to midnight in the Multipurpose Room West on North Campus.

The watch party comes on the heels of a series of voter registration events, lectures, and panels that were held on campus this fall as part of the university’s Hofstra Votes campaign, encouraging students to be civically engaged. After voting earlier in the day – some for the first time – students are invited to enjoy free food and giveaways while watching live election coverage at the watch party.

“Election Nights are a unique challenge in broadcast and digital journalism,” Lukasiewicz said, “and it seemed to me that giving our students the opportunity to build a coverage plan and deliver a live multi-media program would be a great learning experience. It’s also a great way to capture all the energy that has been generated on campus by the ‘Hofstra Votes’ campaign. Students are really engaged in this election, and they are designing their coverage to reflect their interests and concerns.”

The Herbert School’s state-of the-art television and radio studios, as well as the News Hub, the school’s converged, multimedia newsroom, will serve as the center for the evening’s broadcast, which will run from 8 p.m. to midnight. It can be heard live on WRHU-88/7 FM, and can be seen at Hofstra.edu/voteslive and facebook.com/HofstraSchoolofComm/. It will also be one of the broadcasts playing at the “Hofstra Votes” watch party, hosted by the Office of University Relations in partnership with the Division of Student Affairs and the Student Government Association.

“I am so excited to be a part of this amazing project,” said Cassidy Slamin ’22, an associate producer of Hofstra Today. “This is a new experience for everyone and we are all trying to figure out the content we are covering and the technical aspects and interviews, but I can’t wait to see how this event plays out. And to see where this election coverage will take us in the future, especially for the 2020 presidential election.”

Student and faculty experts and commentators will take part in live interviews, and pre-produced background stories from the school’s students will explore some of the most interesting issues and races.  Student reporters will also report live from various Long Island campaign locations and from the “Hofstra Votes” watch party on the Hofstra campus.

Be sure to join the #HofstraVotes conversation on social: