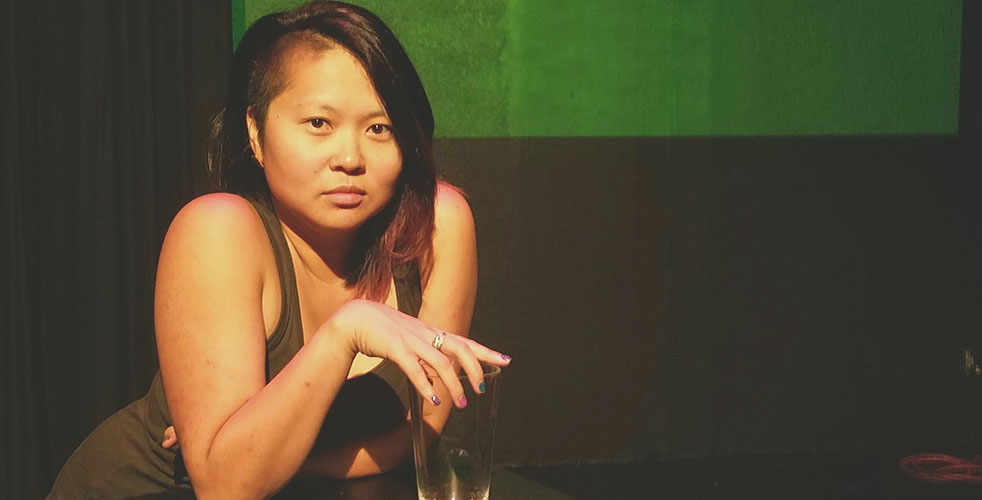 Drama and Honors College alumna Amy Ginther returns to Hofstra to present her autobiographical, one-woman play Homeful on Wednesday, October 24.  The performance, part of the University’s annual Day of Dialogue, will take place at 7 p.m. at The Helene Fortunoff Theater. Admission is free and open to the public.

After graduating from Hofstra in 2005, Ginther, a Korean-American adoptee from New York, was eager to see the world. Between 2006 and 2015, she moved to London, Edinburgh, Dublin, Prague, Buenos Aires, and Seoul. In all, she traveled to more than 30 countries on five continents, spending much time reflecting on her identities as an American, a transracial adoptee, and woman of color. This journey – in every sense of the word – inspired Homeful, an attempt to define the true meaning of home.

“The show is really perfect for students who are asking, what is my life going to be after I graduate? Homeful begins at that point in my life,” says Ginther. “I had just graduated from Hofstra, and was thinking, what am I going to do? Who am I?

“This search for belonging and identity in our 20s, regardless of our background, is something I think all people can relate to. Some start this search later on in life, but at some point we are all trying to figure out who we are and who our tribe is.”

Ginther performed Homeful at the Rosemary Branch Theatre in London, and it had an award-winning, sold-out run at the 2017 San Francisco Fringe Festival. It was the keynote performance for the American Adoption Congress Conference. She is currently performing it for the 2018 United Solo Festival in New York City.

When asked about what home means to her, Ginther replies, “You have to find home within yourself. Because I traveled to so many places, I learned home was not about a perfect place. It was about home within me – where I feel at ease and comfortable and a sense of love and acceptance regardless of where I am in the world.”

Ginther, a member of Honors College’s first graduating class, earned a BFA in dramatic performance and minors in English and photography from Hofstra. She wrote her first one-woman show, between: growing up adopted, for her honors thesis. After graduating, she took that show on the road, performing at the 2006 Edinburgh Fringe Festival and in Seoul, South Korea.

Performing Homeful at Hofstra will be very emotional for Ginther, who was encouraged by numerous professors to fully explore her talents. “I had a mentor through the drama department – Jean Giebel – who was the first person who made me feel like my work was meaningful – that I had a voice and it was important to be heard. Jean flew to Scotland to rehearse me at the Edinburgh Fringe the year after I graduated. That mentorship has extended far beyond my time at Hofstra with Jean, Honors College Dean [Warren] Frisina and a number of my other professors. Hofstra has felt like a home for me academically.” 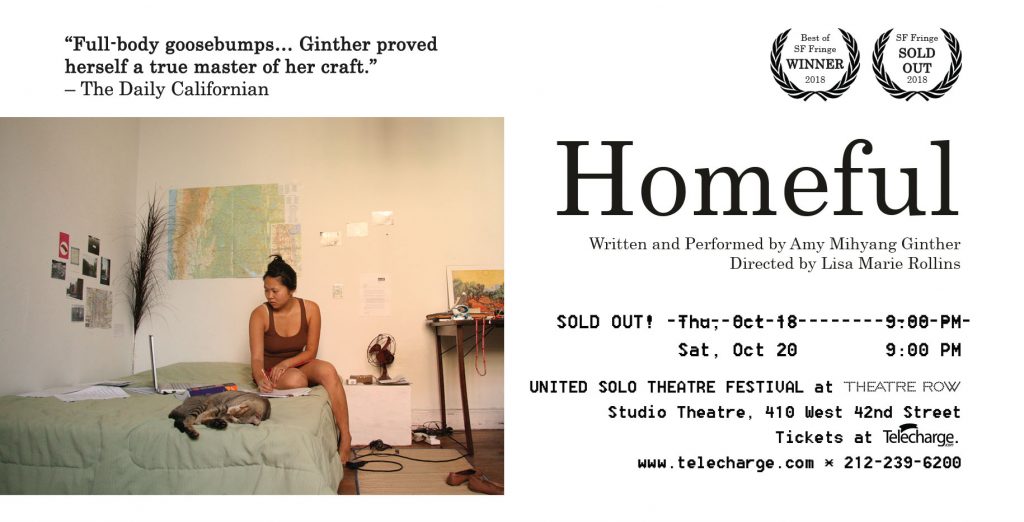 In addition to her undergraduate studies, Ginther earned an MA (with Distinction) in Voice Studies from the Royal Central School of Speech and Drama in London and a TEFL (Teaching English as a Foreign Language) Certification (with Distinction) from TEFL Worldwide in Prague.

Currently a professor of Theater Arts at UC Santa Cruz, she has coached productions at the Aurora Theatre Company in Berkeley and the Jewel Theatre Company in Santa Cruz. In Seoul, she has collaborated with Probationary and Seoul Players, along with conducting workshops with Seoul Shakespeare Company, Seoul City Improv, and the International Filmmakers Guild of Korea.  She also has an impressive list of corporate clients and lectures in Seoul on theater and communication skills.

When Ginther is complimented for having turned her degree into a custom-tailored career, she credits her liberal arts education and her time in Honors College for giving her a big picture outlook. “Let go of people’s expectations of what your degree should or shouldn’t do,” she says. “Be open and engaging with the world, so you can figure out where you can be of service.

“I would love for us to get out of this idea that ‘this degree means this job.’ because there are so many valuable life skills and types of knowledge that we get from the humanities and the arts that enrich our lives in ways that are not measurable.”

This production of Homeful is co-sponsored by Department of Drama and Dance, Hofstra University Honors College; Center for Civic Engagement, Women’s Studies Program and the Hofstra Cultural Center. For more information, call 516-463-5669.