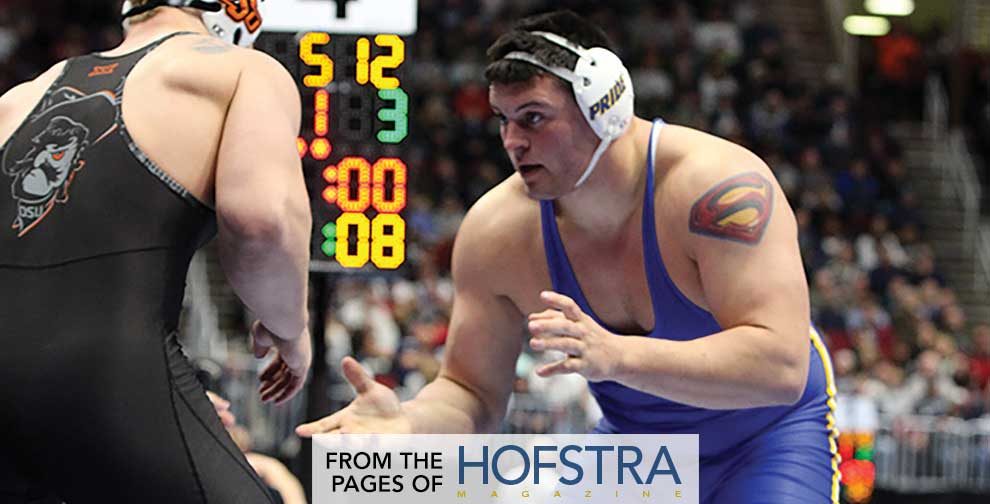 When Hofstra heavyweight wrestler Michael Hughes stepped up to the All-American podium at the 2018 NCAA Division I Wrestling Championships in Cleveland this past March, he was realizing a dream that was 17 years in the making.

“My parents signed me up for the kids wrestling program at the high school when I was 5 or 6,” Hughes said. “But growing up I played a bunch of sports. By high school it was just wrestling, football, and track.”

But as Hughes rolled toward a New York state championship as a senior wrestler at Smithtown West High School on Long Island, and a 109-9 career scholastic record, he had a decision to make: which sport to pursue in college.

He’d never had a losing season in wrestling but was an all-division and all-county selection in football, too. “Even though I love team sports,” he said, “I also like the aspect of winning or losing on my own in wrestling.”

Hughes is a gentle giant, and the transition from high school to college was not easy. “I was a shy person entering college,” Hughes said. “Once I am used to the environment, I become more outgoing. My freshman year I really didn’t talk much. I had to adapt to a whole new situation, including competition, school schedule, practice, and studying. It was definitely a big adjustment.”

In fact, his rookie year was his only losing season at Hofstra (13-20), as an underweight heavyweight.

“Freshman year was my first losing season,” Hughes said. “It was part of the big change and it was difficult mentally. I didn’t enjoy losing and I was questioning myself. I had to work my butt off to get back to where I was.”

He credits Hofstra alumnus Luke Vaith with helping him turn things around.

“My success has been a whole group effort, and there is no way that I could ever repay all those who helped me,” Hughes said. “Luke Vaith was probably the biggest influence on me. Watching his work ethic and how much effort he put in at practice and pushing his body to be successful, was something I didn’t know how to do yet. He was a really big help getting that mindset going.”

And get going he did.

He improved to 22-11 as a sophomore under new coach Dennis Papadatos. Hughes’ junior year saw him place third in the Eastern Intercollegiate Wrestling Association (EIWA), earn an NCAA Championship bid at Madison Square Garden, and post a career-best and NCAA-leading 41-10 record.

With the EIWA Championships at Hofstra, Hughes became the first two-time NCAA heavyweight qualifier since Don Mayorga (1974-1976). He was also Hofstra’s first heavyweight All-American since Joel Kislin in 1973. Hughes finished the season with a 39-6 record. His 19 wins by fall earned him the NCAA Division I Award for Most Pins in 2017-2018.

Hughes, who served as Hofstra Student-Athlete Advisory Committee president in 2017-2018, graduated in May with a bachelor’s degree in physical education and health sciences.

“My two high school coaches (Jim Giugliano and Ken Leverich) are both physical education and health teachers, and I always thought they were great role models,” he said.
He expects to earn a master’s degree in athletic training from Hofstra in 2019.

“My years at Hofstra were awesome,” Hughes said. “Having the student-athlete camaraderie and support system that Hofstra provides really made for a tremendous experience.  I look forward to completing my master’s degree while helping out the program next year.”