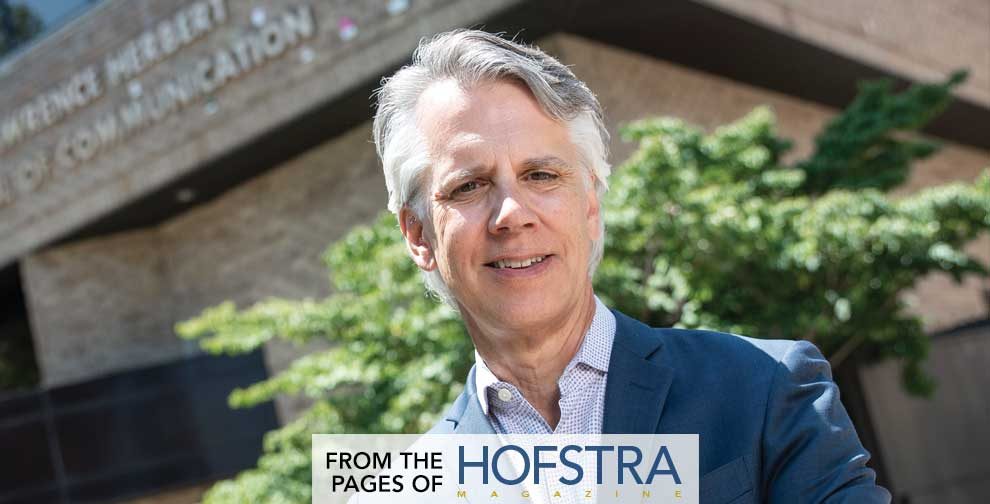 Prior to NBC, Lukasiewicz spent 11 years with ABC News, where he was executive producer of Good Morning America, senior producer  of World News Tonight with Peter Jennings and senior producer of PrimeTime LIVE with Diane Sawyer and Sam Donaldson.

He has produced numerous live and longform programs, winning 10 Emmys, two Peabody Awards, and the Grand Prize of the Robert F. Kennedy Journalism Awards, among other journalism and international film festival awards.

Hofstra Magazine recently sat down with @DeanLuk (his Twitter handle) to talk about his career and his vision for the Herbert School.

You’ve had a very accomplished career in journalism. Why academia now, and why Hofstra?
Yes, this is a big career change for me, but I’m very excited about it. After the last election – it was the fourth or fifth election I’d done for NBC News – I took time to revisit what I was doing and I decided to take the opportunity to do something new. I’ve had these tremendous opportunities and I’ve learned a lot. In this next chapter of my working life, I wanted to give back. I did a little teaching at Columbia University a few years ago, and I really enjoy being around young people and the energy and passion they have for storytelling.

Why Hofstra? Like a lot of people in my business, I mainly knew Hofstra as the place where many debates had been held. Once I had the chance to come to campus, and saw the facilities and met with the faculty and students, I was very impressed. What’s rare here is that, compared to most other schools, we give students the ability to be hands-on from the minute they walk in the door. Not enough people know about what our school does, what it’s capable of, and that’s something very near the top of my list of priorities to address.

Part of my mission here is to be an ambassador for the University and for the Herbert School. I’ve been fortunate to develop a lot of contacts in the industry, and I want to spend time with those people telling our story, speaking at conferences, participating on panels, and making sure that the Herbert School is in the national conversation about communication and media.

After almost four decades of covering many high-profile stories, which ones stand out for you?
When I was starting out as a reporter for The Globe and Mail newspaper in Toronto, I got the chance to report from inside Poland during its martial law period and the government crackdown on the Solidarity trade union. They closed the borders under pressure from the Soviet Union, but I got in and operated undercover for three weeks. I wrote a front-page series in the newspaper and that was a tremendously exciting thing to do; it felt like we were telling a really important story. I was reporting on what was going on behind the Iron Curtain in a country that had been brutally repressed. There were tanks in the street and curfews and no telephones. Ultimately, I had to turn my notes into handwritten letters, as though I was writing to friends, so that the border guards wouldn’t suspect I was a reporter. This happened at the start of my career, and I was a business reporter at the time. But I spoke Polish and had written about Poland, so I successfully argued with my bosses to give me a shot.

Going to Baghdad with Diane Sawyer to interview Saddam Hussein for ABC News was also a wild experience. We interviewed him two months before he invaded Kuwait. Two things made a strong impression: first was the degree of fear that he instilled in everyone around him. Imagine the most nervous assistant to some Hollywood star and multiply it by a million; they were just terrified they’d be dead if they displeased him. The second was his utter isolation from and ignorance of the West. I think it explains in part his significantly gross miscalculation to invade Kuwait.

I also did a project called Democracy Plaza, which is the first time we took live election coverage at NBC News completely outdoors – we created studios and a three-block exhibition on American democracy. There was a map on the ice [of the Rockefeller Plaza skating rink]. It was really quite a thrilling production and sort of broke the mold on how you do elections. The principle of it, which I was very happy we carried through, was that as divisive as an election gets between candidates, we can all join together to celebrate the fact that we have a democracy.

Playing This or That with
@DeanLuk

Coffee or tea
Paintings or drawings
Books or movies
Early bird or night owl
Vanilla or chocolate
Winter or summer
Dogs or cats
(My dog would kill me if I said cats!)
Star Wars or Star Trek
Call or text
Ice cream or frozen yogurt
(Not even close!)
Game of Thrones or Walking Dead

Speaking of democracy, you’ve said that the growth of digital media and communication technology affects civic life. Why is that connection important?
I’ve often said that communication has never been more central to American life. The stories we tell each other, whether in film or video or audio or the written word, the conversations we have, are giving more people a voice and having a greater impact on what happens in society. How we use communication to deal with social problems, to deal with one another and our differences, and how we confront challenges such as poverty, the environment, or education are critical. Storytelling sounds like a folksy term, but if you think about it, it’s really core to all human interaction in society. You don’t usually tell someone to sit down and “tell me an issue.” You say, “tell me a story.” That’s how you motivate change and make a difference.

Now as we’re preparing a generation of students who are going to be communications professionals, they have a responsibility to make sure their craft also serves the civic life of the nation. I want them to leave Hofstra with a strong sense of the history of communication, a strong sense of the values and ethics they need to uphold, and a strong liberal arts foundation. I want them to leave equipped and confident to deal with the change that is 100 percent inevitable in their business as platforms come and go. I don’t think there is any business, any field right now that is changing more rapidly than communication.

What’s your vision for The Lawrence Herbert School of Communication?
Initially, I plan to do a lot of listening. I want to talk to students, to faculty, to alumni, and to departments across campus, and hear where they think the school is, where they would like to see us go, and how we can take it to the next level. I have several broad priorities: first, get the word out about the Herbert School. There is a very vibrant global conversation going on about the role of communication, and we need to be part of that discussion. Second, I want to build on what is already a very strong network of alumni and friends of the school. Lawrence Herbert made a tremendous gift to the school; I’ve gotten to know him, and he remains keenly interested in helping us achieve our mission. That gives us a great launching pad to build great relationships so we have the resources to do even more. Finally, led by our faculty, I want to look at what we are teaching to make sure we are benefiting our students by staying at the cutting edge, offering innovative programs, and really opening both their minds and our own to new approaches. I want to make sure the faculty are supported in exploring new ways to teach and new curricula, as well as in their own research and academic pursuits.

What would you be doing if you weren’t in journalism?
Believe it or not, I might have been a professional musician. I was very involved in musical theater as a college student, and a lot of my friends in Canada are still professionally involved in the theater business. The summer I got my first job as a reporter, I also got my first union music gig. It paid more and it paid cash. Luckily it was a gig at night; I was a business reporter, so I wrote my pieces during the day before the market closed, and I managed to do both until 10 weeks later when the show closed. I bought my first car with my music earnings, and that was my last union gig. I’m a traditionally trained pianist, but my weird skill is that I mostly play by ear – if I know a song well enough to hum it, I can usually play it.