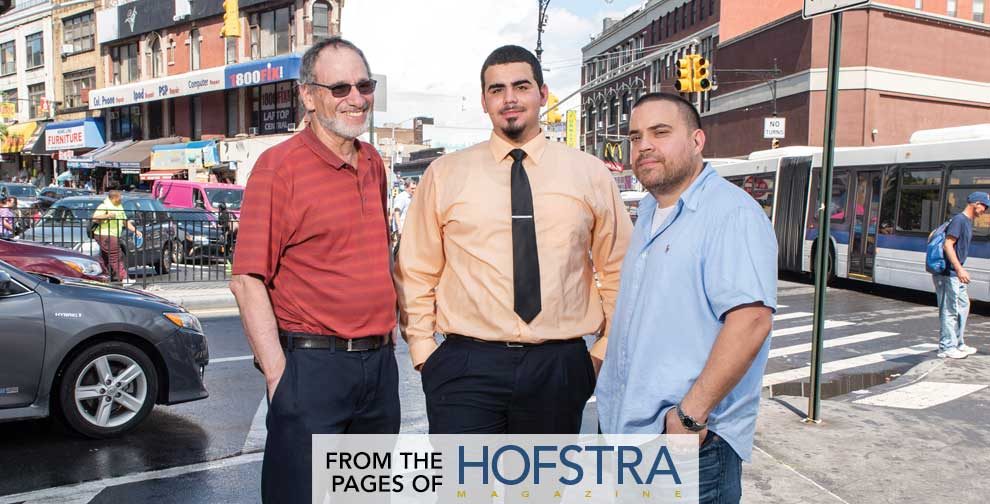 The recording runs in a continuous loop, piped through a beat-up speaker that sits on the sidewalk in front of a cell phone repair store at the corner of East 149th Street and Third Avenue.

It’s a sweltering summer afternoon, the first day of August, and this intersection – a triangular slice of the South Bronx known as the Hub, is a pulsing mass of people and sounds. Subway rumbling below. Drivers laying on their horns. Pedestrians squeezing past street vendors, weaving through a maze of folding tables filled with DVDs, books, socks, and handbags.

It’s less than 30 miles from here to Hofstra University – under an hour if you hit the traffic just right. But if you grew up in this neighborhood, you know how easy it can be to get sidetracked, that geography isn’t the only thing standing in your way.

When Pablo Muriel first met the man who would change the course of his life – Education Professor Alan Singer – Singer was tinkering with a broken VCR in his office.
“I see this person lying on the floor. I thought he was the janitor,” said Muriel, BA ’01, MA ’03. “I just needed him to sign my schedule. It was supposed to be a few minutes. It became an hour-and-a-half conversation.”

They discovered they’d both grown up poor in the South Bronx, just blocks from each other, and had even attended the same middle school, 30 years apart.

“One of the things that makes you a good teacher is being able to respect who your students are and where they come from,” Singer said. “You have to find things in your experiences that connect with theirs.”

One of the things that makes you a good teacher is being able to respect who your students are and where they come from,” Alan Singer said. “You have to find things in your experiences that connect with theirs.”

A junior transfer student, Muriel was a history major thinking about law school because he had seen so many childhood friends end up in prison.

“Alan said, ‘Why don’t you become a teacher, catch kids and help them before they need a lawyer?’ I started laughing,” Muriel said. “He told me, ‘You could be a different kind of teacher, go back to your community.’ It’s been 18 years now, and I’ve never looked back.”

Eleventh-grade U.S. History was unlike any class Dennis Belen Morales ’20 had ever taken. The teacher, Pablo Muriel, questioned conventional interpretations of history, and challenged students to relate what they were learning to their own lives.

“When we talked about the Bill of Rights, he would ask us, ‘Is there a Student Bill of Rights; what should it be; what should it do?’” said Belen Morales, who attended Alfred E. Smith Career and Technical High School in the Bronx. “From there, we did petitions about removing the metal detectors at school or putting a policy in place about using them that wasn’t so arbitrary.”

They went to local community board meetings. They organized a forum with a private school in Midtown Manhattan, with students from each school spending a day at the other.

“Pablo believes in activism, and believes in using teaching to promote social justice,” Singer said. “What is the role of a teacher? To introduce the material and raise questions and to have kids understand the world in a different way and realize they can change it.”

Muriel also makes a point of taking his students on trips out of the Bronx. One of his favorite destinations is Hofstra, where they attend lectures, events, and panel discussions about politics and history. For many students, it’s their first time seeing a college campus.

“Almost from the beginning, as soon as he got his first job in the Bronx, Pablo started to bring his students to Hofstra,” Singer said. “He works with students who often lack structure in their lives. He provides that very structured environment in which they can learn, but Pablo also offers himself as a big brother.”

Belen Morales’ first visit to Hofstra came during the University’s 2016 conference on the presidency of George W. Bush. He met several professors, including Singer, and spent some time exploring campus.

“I like to give them time to walk around campus on their own,” Muriel said. “I want to give them the idea – you need to apply to school, apply to the NOAH program (which provides academic and financial support for students from diverse backgrounds). “Just seeing somewhere so different from where they are from changes their perspective.”
Several of Muriel’s students have ended up at Hofstra, and two have become public school teachers in the Bronx.

He’s a junior Honors College student, a history major with a Latin American and Caribbean studies minor, the recipient of a prestigious Gates Millennium Scholarship who chose Hofstra over Yale. He’s also a member of the NOAH program.

Already, Belen Morales has taken a few classes with Singer. Eventually, he wants to work in education policy. He is also considering law school.
But first, he wants to teach history. Back in the old neighborhood.

“It’s where I grew up,” Belen Morales said. “I can understand the demographic. I wanted to be an engineer before I met Pablo.”

The three of them – the 68-year-old college professor, the 41-year-old high school teacher, and the 20-year-old student – are deep in conversation, walking along Courtlandt Avenue toward the Hub.

They look mismatched, but they share a bond that transcends generational, cultural, and ethnic lines.

“It’s not just that Pablo is Puerto Rican and male; it’s that he’s from here,” Belen Morales said. “It’s like when our class (at Smith High School) first met Alan, we were all like, ‘Who’s this white guy?’ but then he told us his story and that he grew up on Jesup (Avenue in the South Bronx).”

I wanted to escape this neighborhood and never come back. I didn’t expect to be doing something like this,” Pablo Muriel said. “But it’s been beautiful. It may seem small, but it’s a process. Alan taught me: Do what you need to do; just keep it moving down the line.”

Together, they have presented lectures at the Museum of the City of New York, at Rutgers University, and before the New York State Council for the Social Studies on topics such as “Battling Against Metal Detectors and Criminalization in an Inner-City New York City High School” and “Promoting Student Activism as Citizenship Education.”

Singer was even the best man at Muriel’s wedding.

“He was a mentor to me, to all my students,” he said. “I couldn’t tell you one thing Alan did for me; I could tell you a million things he did.”

Muriel, now working toward a doctoral degree at Hofstra, is also an adjunct instructor teaching an introductory graduate course called Perspectives in Educational Practices. Belen Morales has spoken to Muriel’s class, and to Singer’s classes as well. Singer, in turn, has placed student teachers in Muriel’s school.

“I’ve had the opportunity with Pablo, and now with Dennis, to have an ongoing relationship of exploring ideas together,” Singer said. “I’m 68 years old – to have teachers and people at different stages of their lives who buy into the ideas about teaching and about social justice that I value is very, very important to me. It’s one of the great thrills of the job I have.”

There’s no relief from the heat. The afternoon sun is blistering and the air hangs thick and heavy, like a musty drape. But nothing can muffle the sales pitch blaring from the speaker on the corner:

“Welcome to the world-famous Bronx, NY … we fix everything!”

Muriel knows there are no such guarantees.

“I wanted to escape this neighborhood and never come back. I didn’t expect to be doing something like this,” Muriel said. “But it’s been beautiful. It may seem small, but it’s a process. Alan taught me: Do what you need to do; just keep it moving down the line.” 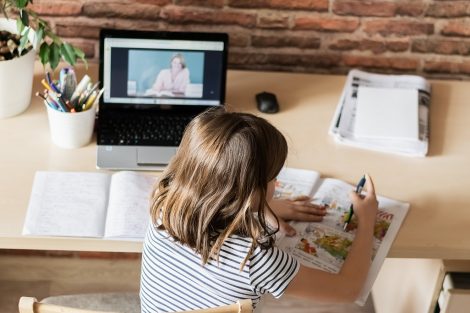