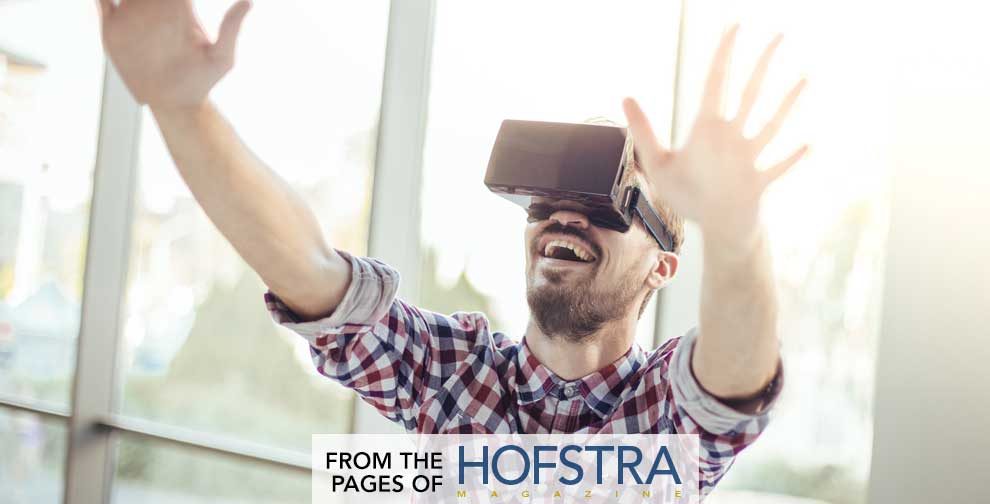 In fall 2018, a joint one-credit VR Creation Lab will be offered, which will be cross-listed in Radio, Television, Film; Journalism; Computer Science; and Fine Arts, Design, Art History.

Students are now spending class time fighting zombies and flipping through coloring books, thanks to a new course that lets them explore the art and science of virtual storytelling.

A collaboration between The Lawrence Herbert School of Communication and the Fred DeMatteis School of Engineering and Applied Science, the course brings together students from diverse majors such as journalism, film, graphic design, and computer science to create digital storytelling projects using the latest in virtual reality and 360-degree video technology.

“The use of digital storytelling tools and techniques has exploded over the last decade, as the communication and electronics industries began merging game design and interactive web development,” said Aashish Kumar, associate professor in the Department of Radio, Television, Film, who teaches the class. “Journalists, in particular, now have the ability to bring stories from far and wide and allow audiences to be immersed in those environments – not just to read the text or look at photographs or watch a flat video, but to be in the center of the action.”

Students shoot and edit several short 360-degree videos on their own and then move on to work in interdisciplinary teams on projects that employ virtual reality in a computer-simulated 3D environment. When the videos are experienced through a VR headset, viewers get the sensation of physically being in the depicted scene.

“This is the first time I’m collaborating with people outside my major,” said journalism major Mackenzie Caldwell ’18, whose team worked on the zombie project, which takes a viewer through a dark warehouse inhabited by the living dead. “I’ve never been in a class where you have both a journalist and a game designer, and those two people make something.”

Caldwell says he jumped at the chance to try some of the cutting-edge equipment that is used by media outlets such as The New York Times and The Associated Press, both of which produce regular VR features that allow viewers experiences such as joining Iraqi forces in battle with ISIS or traveling inside the brain to see how Alzheimer’s disease develops.

Students shoot and edit several short 360-degree videos on their own and then move on to work in interdisciplinary teams on projects that employ virtual reality in a computer-simulated 3D environment.

Students in the class learn to shoot using Samsung Gear 360 cameras, edit photos and videos with Adobe Premiere Pro in the Herbert School, design interactive elements using Unity game design software in the DeMatteis labs, and learn how to display their finished work on platforms such as Oculus Rift and Google Cardboard.
“When I first came to Hofstra, I was really into writing,” said Caldwell. “But taking a class like this has really kicked down the door to everything else journalism could be. My idea of how to tell a story is different now.”

Senior Brandi Kinard said the VR course was “a perfect marriage” between her graphic design major and engineering minor, and provides a good foundation for graduate school.

“I aspire to be a consultant who can connect the tech world and the art world, and I think virtual reality can be a good tool to tell stories about others and even promote social change,” she said.

Her team’s project allows viewers to jump into the pages of a coloring book, view its contents from every possible angle, and add color to black and white images. Kinard is also working on adding virtual reality elements to a painting she did several years ago in an art class.

“VR takes you places you couldn’t have imagined. You’re transported into someone else’s shoes, or even places where people don’t live, like outer space or a digital world,” she said. “I was surprised that people with different backgrounds could work well with this kind of technology, but we’re all learning together.”

Kumar says it’s the blend of different disciplines that makes the projects so successful.

“One of the ideas behind team-based work in the VR environment is that you won’t have all the skill sets you need to create something in this medium,” he said. “So I’ve put people together who have different skills – graphic designers, coders, editors. It’s paramount that we start to taste what that interaction is like.”

The vision for the course began evolving in summer 2016, when Kumar met with then-Herbert School Dean Evan Cornog and DeMatteis School Dean Sina Rabbany, as well as Krishnan Pillaipakkamnatt, chair of the Computer Science Department, and Edward Currie, associate professor of engineering.