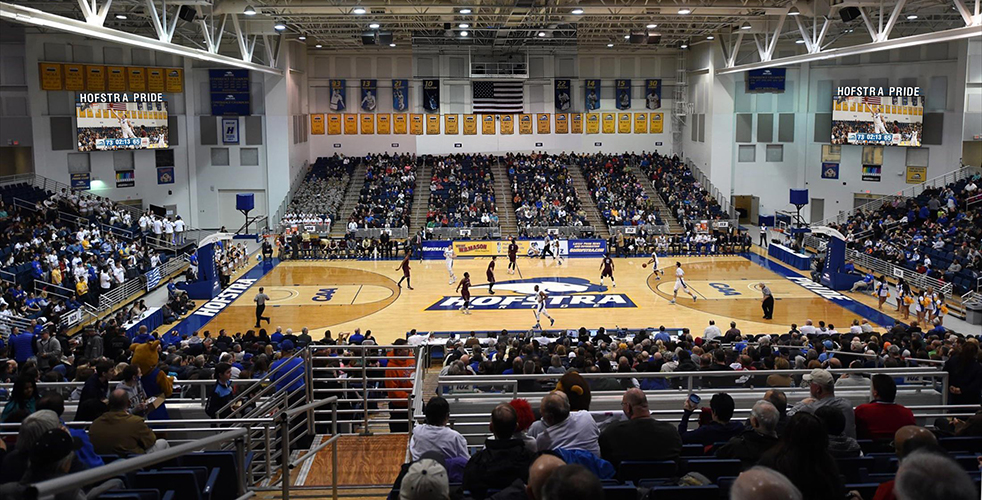 Hofstra University’s David S. Mack Sports and Exhibition Complex will get new LED video displays and a new sound system, transforming the building into a venue that rivals professional sports arenas and stadiums across the country.

On the four new video displays being installed, visitors to the Mack Sports Complex will be able to see instant replay and content intended to dramatically improve the in-arena experience. The new video displays and sound system will bring live video, live statistics, graphics, animation, and sponsorship content to the audience for a variety of different events hosted at the Mack Sports Complex. The upgrades will be installed by Daktronics, which has installed video displays and scoreboards in the homes of dozens of NFL, MLB, and NBA franchises, including at MetLife Stadium, Citi Field, Barclays Center, and Madison Square Garden.

A brand-new sound system is also a key component of the changes, with 16 new speakers and four subwoofers added to the main seating bowl area. Made by Fulcrum Acoustic, these loudspeakers provide stunning output and unmatched clarity even at high sound pressure level.

“This is an important moment for Hofstra, its athletics program and for the entire community,” said President Stuart Rabinowitz. “The David S. Mack Sports and Exhibition Complex has a storied history of hosting events of local, national, and international significance – from three consecutive presidential debates to countless Hofstra and local high school commencements over the years, not to mention contests hosted by our own NCAA Division I teams. These improvements will ensure that everyone who steps foot in this building will have the best experience possible.”

Said Hofstra Director of Athletics Rick Cole Jr: “This is an absolute game-changing day for the Hofstra University community and the many friends, fans and supporters on Long Island who visit the Mack Sports Complex on a regular basis. The upgrades to the building experience for those attending Hofstra sporting events and the array of other sporting events, commencements, and conferences will be incredible. The addition of the new video displays and new sound system in the Mack Sports Complex are essential to our commitment to provide a great experience to all who attend an event here and a first-class environment for our student-athletes, coaches, and staff.”

Commented Scott Willson, Daktronics Regional Sales Director: “Daktronics is very proud to again partner with Hofstra University for this impressive audio and video upgrade for the Mack Sports Complex. The enhancements include a brand new custom designed audio system, some of the largest indoor video boards on the East Coast and a full complement of Daktronics professional services to include game day operation as well as Daktronics award winning creative content. Hofstra’s fans, sponsors, and student-athletes will truly be amazed with the upgrades.”

The Mack Sports Complex opened on January 2, 2000. The building, which originally was named Hofstra Arena, was renamed to honor the generosity and commitment of David S. Mack. Construction of the $15 million, 93,000 square-foot facility began in the fall of 1998 and was completed in December 1999. The Complex houses the Hofstra Basketball and Wrestling teams, and also hosts commencements, exhibitions, trade shows, concerts, and other special events. In September 2016 the Mack Sports Complex hosted the Presidential Debate between Hillary Clinton and Donald Trump. It was the third consecutive election cycle that Hofstra hosted a debate in the Mack Sports Complex following the 2012 debate between President Barack Obama and Mitt Romney and the 2008 debate between John McCain and Obama.

About Daktronics
Daktronics helps its customers to impact their audiences throughout the world with large-format LED video displays, message displays, scoreboards, digital billboards, audio systems and control systems in sport, business and transportation applications. Founded in 1968 as a USA-based manufacturing company, Daktronics has grown into the world leader in audiovisual systems and implementation with offices around the globe. Discover more at www.daktronics.com.