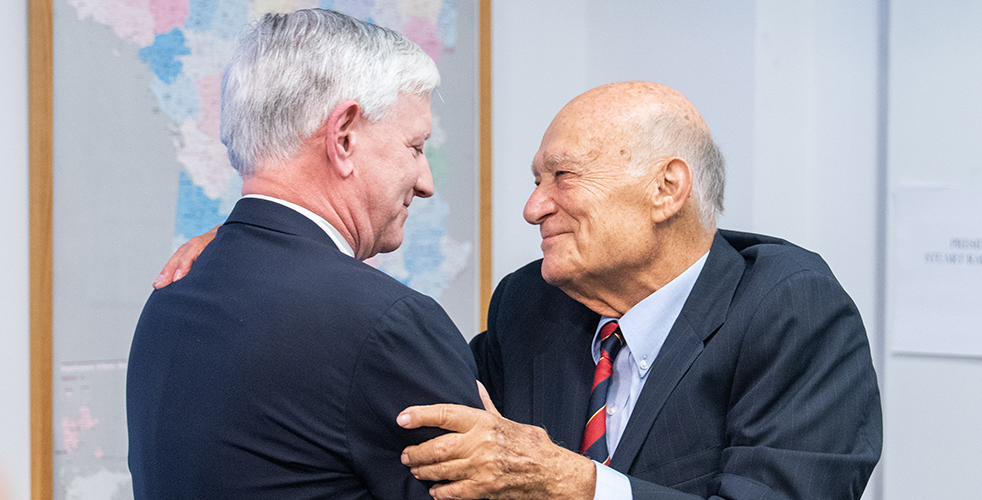 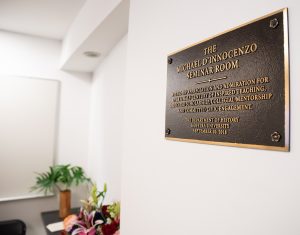 More than one 100 members of the Hofstra community paid tribute to Professor Emeritus Michael D’Innocenzo for his many years of service to the university by naming a seminar room in his honor. The Michael D’Innocenzo Seminar Room is located in the History Department on the third floor of Joseph G. Shapiro Family Hall. D’Innocenzo, Hofstra’s longest-serving faculty member, is a professor emeritus of history. (Watch the livestream of the event)

“Faculty are at the heart of any institution, but particularly at Hofstra,” said Hofstra Provost and Senior Vice President for Academic Affairs Gail Simmons. “Professors like Mike D’Innocenzo – with his dedication to students inside and outside the class, his commitment to community in all its forms, his long history of service and his pure love and joy in the study of history – are the soul of the university.”

“Mike D’Innocenzo is my friend, my mentor, role model, hero and perhaps most importantly my teacher,” said Steven A. Meyerowitz, Esq. ’76, president of Meyerowitz Communications. “I met Mike in 1972 as a 17 year old freshman.” Meyerwitz joked that he while he majored in political science, he minored in Professor D’Innocenzo. “His classes were educational as well as exciting, stimulating, thought-provoking, insightful and necessary. He taught his students how to weigh evidence, evaluate arguments and conclusions. He didn’t teach us what to think but how to think.” 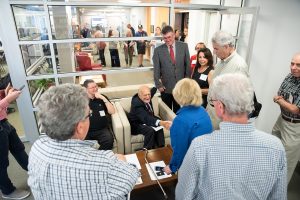 New York State Comptroller Thomas DiNapoli ’76 sent congratulations through his Long Island Regional Director Michael Caplice. “For Mike, history matters deeply. The intellectual work we do to understand the past does not stop in the library, the classroom or at the edge of campus. It continues into the present and into the world we all share. As a teacher, but also over a lifetime of civic activism and community leadership, Mike D’Innocenzo has demonstrated the power of learning to inform our debates and spark positive change to make our society better.”

Professor D’Innocenzo came to Hofstra in 1960 and received the University’s Distinguished Teaching Award in 1966. Throughout his teaching career at Hofstra, Professor D’Innocenzo has been recognized for his teaching, writing and community activities focused on civil rights and social justice. In the early 1980s he was selected as national chairperson of the United Campuses to Prevent Nuclear War. In 1985 he and his wife, Dr. Andrea Libresco, a professor in Hofstra’s School of Education, helped found the Long Island Alliance for Peaceful Alternatives. 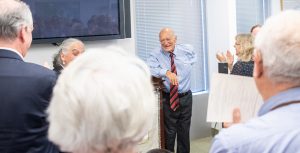 Professor D’Innocenzo was appointed Hofstra’s Harry H. Wachtel Distinguished Teaching Professor for the Study of Nonviolent Social Change In 1998. The professorship was named for Long Islander Harry Wachtel, who worked closely with Dr. Martin Luther King, Jr., during the 1960s. Professor D’Innocenzo established the Hofstra Public Policy Institute in association with the Kettering Foundation and was a founding member of the Hofstra Center for Civic Engagement. He was also appointed to the Board of Directors of the National Issues Forums Institute and in 2014 he was honored for lifetime achievement by the Association of Italian American Educators (AIAE).

D’Innocenzo closed the ceremony by thanking “his team” for the honor of the seminar room – his family, the senior leadership of Hofstra, his colleagues in the History Department and throughout the university. Also “the village people” – the community members with whom he’s worked so closely throughout the decades. And especially, he said, “my students who have gone on to become alumni and my friends.”

LI Hurricanes: Planning for the Future, Remembering the Past
“All Roads Lead to Phantom”