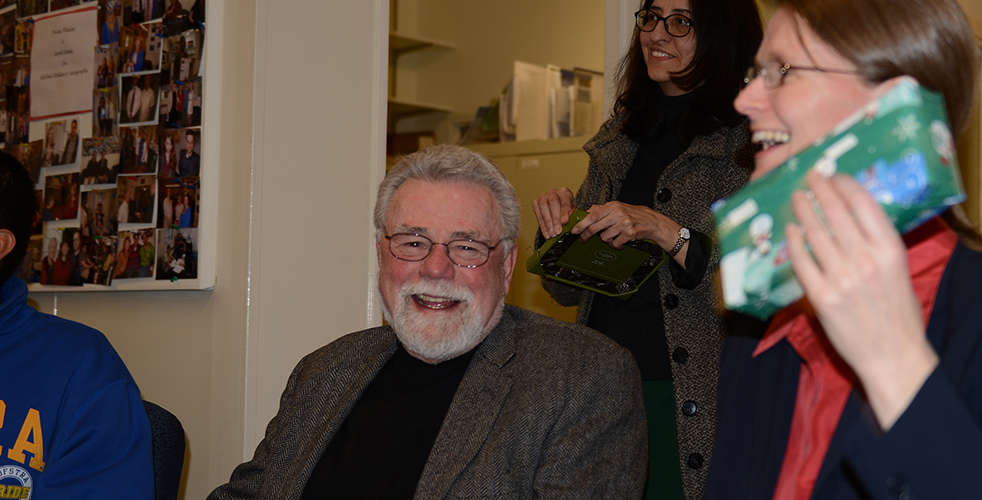 The Hofstra community is deeply saddened by the passing of Dr. Timothy Smith, Professor Emeritus of Education and Adjunct Professor of Global Studies. He died of cardiac arrest on August 4, the day after his 84th birthday.

Dr. Smith, who completed his undergraduate studies at Princeton and graduate work at Rutgers University, joined the Hofstra faculty in 1963 as an instructor in the Foundations of Education program. He was promoted to Assistant Professor in 1968 and to Associate Professor in 1975 before becoming a full Professor in 1994.

During this time he served as Chairperson of the Department of Foundations of Education from 1971-1982 and Director/Coordinator of the Master’s Program in Foundations of Education from 1982 until his retirement from the full-time faculty in 2004. At that time, he became a Professor Emeritus in the School of Education. Beginning with the 2011-2012 academic year, he added the title Adjunct Professor of Global Studies to his already distinguished CV.

He and his wife, Global Studies Professor Linda Longmire, directed Hofstra’s European Odyssey program, a transformative semester-length study abroad program. Each year since 1992, the annual Odyssey program has allowed approximately a dozen students to travel and study for 10 weeks by minivan throughout Western and Eastern Europe, enabling them to experience an array of countries and cultures. Dr. Smith taught the Odyssey courses in “Globalization & Human Rights” and “Field Studies in Geography” for 14 years.

Family members, friends, faculty, administrators, students and alumni – including many veterans of past European Odysseys, gathered at the Hofstra Labyrinth for an informal tribute to Dr. Smith on August 6. They remembered his generous nature, community activism, his love of knowledge, food and storytelling – and especially his devotion to family, friends and students.

Hofstra alumnus and three-time Odyssey traveler Renato Matos ’04, ’08 recalled the story Smith told about meeting Albert Einstein while he was still an undergraduate at Princeton. Caught off-guard – but realizing they were in the presence of greatness – Smith and his companion bowed. To their surprise, Einstein responded in kind.

“Why do you think Albert Einstein bowed back?” Matos said during the Labyrinth tribute. “I think it was because somehow he recognized the presence that Tim was. You didn’t have to spend a lot of time with him to realize he was a special person. Thoughtful and loving, and all the things you’d want in a friend and a father.”

Anthony Triolo ’09 shared how he, his brother Michael ’08 and sister Alexandria ’16 were each transformed by their experiences on the European Odyssey.

“The trajectory of our family’s life was changed by Tim Smith,” Triolo said. “He was a brilliant educator who enjoyed life to the fullest. And his humbleness is what I will carry with me for the rest of my life.”

In addition to Linda Longmire – his wife of nine years and partner for 35 years – Dr. Smith is survived by two daughters, one son and four grandchildren. A formal memorial is being planned for Friday, September 21, at The Helene Fortunoff Theater at Monroe Lecture Center. More details will be announced in the coming weeks. The date, which also marks the U.N. International Day of Peace and the Autumnal Equinox, “is the perfect time to honor Tim,” said Dr. Longmire.

Dr. Singer on Hempstead Superintendent
Reporting on Women’s Issues in the Church