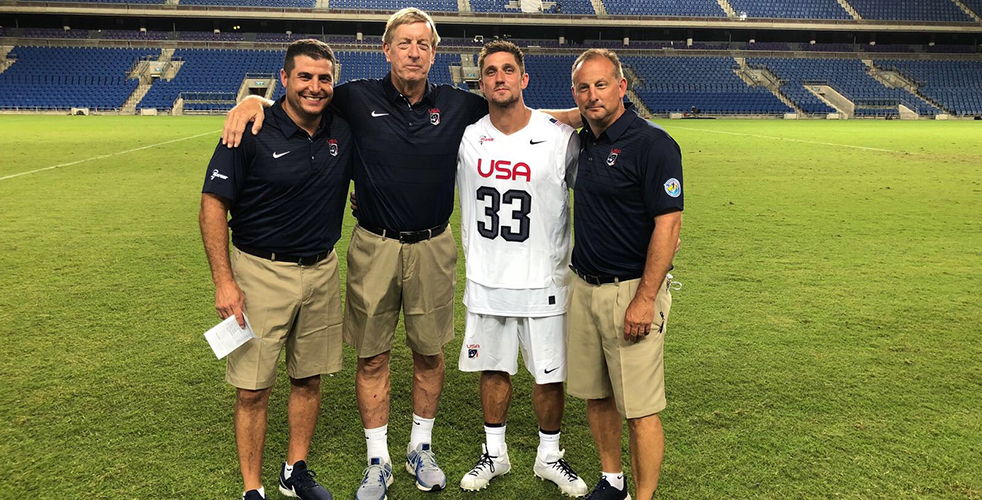 The United States National Team returned to the top of the mountain in the lacrosse world as the Stars and Stripes defeated Team Canada, 9-8 on a dramatic last second goal in the title game of the 2018 Federation of International Lacrosse (FIL) Men’s World Championships in Netanya, Israel Saturday morning.
PHOTO GALLERY

Tom Schreiber’s goal with one second remaining broke the 8-8 deadlock and gave the U.S. its 10th overall championship and avenged a loss to Canada in the 2014 World Championship title contest. Team USA has alternated winning world titles with Canada, grabbing crowns in 2002, 2010 and 2018 with our neighbors to the north winning in 2006 and 2014.

Four current and former members of the Pride family are part of the U.S. National Team’s gold-medal winning performance. Hofstra Men’s Lacrosse Associate Coach and U.S. midfielder Kevin Unterstein was one of four players participating in the world championships with Hofstra ties. Unterstein played in all seven games for the 7-0 U.S. National Team and recorded one goal, two assists and 13 ground balls.

Hofstra Head Men’s Lacrosse Coach Seth Tierney, who is entering his 13th season with the Pride in 2018-19, served as an assistant coach on the U.S. National Team along with Hofstra alumnus and current Marquette Head Lacrosse Coach Joe Amplo, ’01. Former Hofstra Head Men’s Lacrosse Coach John Danowski, who coached the Pride from 1986 through 2006, was the U.S. National Team Head Coach and adds a FIL World Championship to his coaching resume that includes three NCAA titles at Duke University.

In addition to Unterstein, the FIL World Championship title game saw another Pride alumnus on the field in Josh Byrne, ’17 for silver-medal winning Canada. Byrne, a former CAA Player of the Year and MLL Rookie of the Year in 2017, played in all seven games for the 5-2 Canadians and recorded six goals and six assists with three ground balls.

Current Hofstra student-athlete Jimmy Yanes, who is entering his senior year in 2018-19, was a member of Team England, which placed fifth in the Championship. Yanes played in all eight games for England and tallied three goals and two assists with two ground balls.

Hofstra alumnus Zach Pall, ’12, led the host Team Israel to a 5-2 record and a seventh-place finish in the 46-team Championship. Pall tallied a team-high 21 goals and three assists with seven ground balls in seven games and finished 22nd in points in the Championship.

Another Hofstra alumnus, Chris Panos, ’96, was part of history as an assistant on the coaching staff for the National Team of Greece. Team Greece placed 19th with a 4-3 record in their debut appearance in the FIL World Championships. Panos is an assistant coach at Queens University of Charlotte.

The next FIL Men’s World Championships will be held in Coquitlam, British Columbia, Canada in 2022.