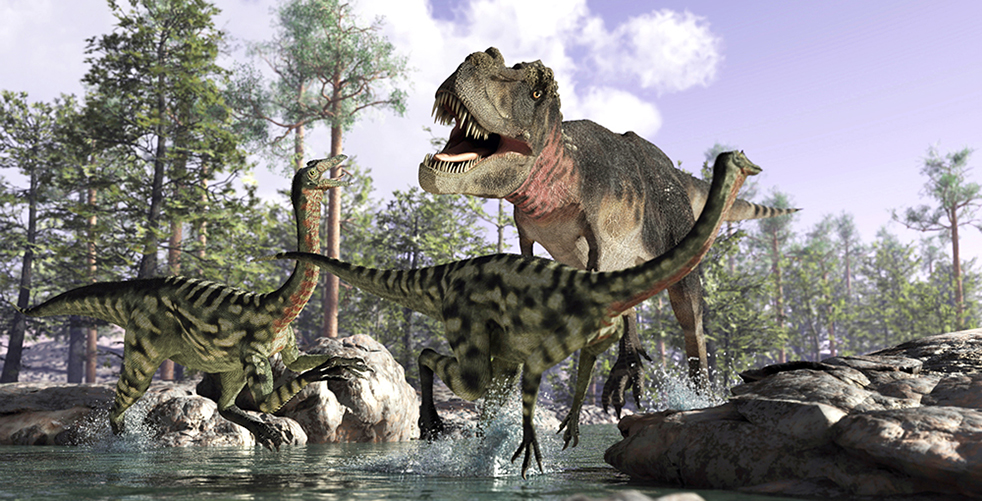 Starting with the premiere of Jurassic Park in 1993 through to this summer’s Jurassic World: Fallen Kingdom, dinosaurs have been leaving a huge footprint at the box office.

Back in 2015 when the first Jurassic World movie was released, News@Hofstra spoke to Dr. Bret Bennington, chair of the Department of Geology, Environment and Sustainability, on the science of the films. The 1990 novel Jurassic Park by Michael Crichton and the release of the first film made the concept of dinosaurs again walking the earth seem very possible and frightening. We asked Dr. Bennington if the science of Jurassic Park is within the realm of possibility and about his own feelings on dinosaur entertainment.

Has any good come out of Jurassic Park in terms of sparking interest in dinosaurs and science? Did Michael Crichton’s background as a doctor help its success?

I don’t have any data, but it seems likely – particularly with the first film and the book – that dinosaurs were elevated in the public eye to a large degree. What made Michael Crichton’s novel compelling was that the science was pretty good. In the two novels of his that I’ve read, Jurassic Park and The Andromeda Strain, the science is very plausible. The key to good science fiction is the element of plausibility. It doesn’t need to be completely grounded in science, but you need to at least give the reader or the viewer something to grab on to so that they can think, “Okay, this could be.”

In your opinion, what are the biggest obstacles preventing us from bringing back the dinosaurs as imagined in the Jurassic Park movies?

The whole storyline of extracting dinosaur DNA from mosquitoes and other biting insects preserved in amber could conceivably be done, but realistically it’s impossible. There are a lot of different reasons for that.

DNA is a very fragile molecule even under the best of conditions. It doesn’t survive for very long. We can extract DNA from the tissue of extinct organisms. For example, we have sequenced the entire genome of our closest extinct relative, Neanderthal man, by getting remnant tissue from fossil bones and teeth. But Neanderthal fossils aren’t very old – they’re only a few tens of thousands to hundreds of thousands of years old. The youngest dinosaur is 65 million years old. It’s highly unlikely that any DNA would survive that long even under the best of circumstances.

Even if the DNA did survive, it would probably be in such small fragments that it would be impossible to reassemble into a coherent genome. And if you could do that, getting that DNA into a cellular system where it could be expressed and translated into an embryo is a whole other challenge. So it seems unlikely we’ll be able to de-extinct a dinosaur.

Another approach would be to start with a chicken, which is a living descendent of the dinosaur. The DNA that made a dinosaur still exists in chickens, but the genes inherited from dinosaurs in chickens are switched on and off in different timings and expressed in different degrees. If we could learn how to flip those switches to create a chicken embryo that develops with a tail and jaws and teeth instead of a beak, you’d have a dinosaur – although it would be unlike any particular dinosaur that ever existed.

Scientists are actually working on this, not so much to recreate dinosaurs as to better understand how evolution causes morphological change in species.

Was there any part of the original Jurassic Park that made you think, “This is ridiculous!”?

Overall the first movie was pretty good, and they were careful to consult with paleontologists to make it realistic. There were some mistakes, and many of those were probably deliberate. The Velociraptors were made bigger and more threatening. The Dilophosaurus was made smaller so it could attack one person in his jeep. The Brachiosaurus was shown chewing like a cow – their jaws and teeth didn’t work that way.  Unlike many herbivorous dinosaurs, sauropods like Brachiosaurus could not chew their food – they could only bite and swallow.

It was with the third movie [Jurassic Park III] that they started to get away from science and realism. My biggest complaint was that they had the flying reptiles, the pterosaurs, as these menacing predators attacking people. Most pterosaurs were fish eaters – like a giant albatross – and would not have been threatening to people.

Science aside, if bringing back dinosaurs was possible, what kind would you most like to see in the flesh?

Predatory dinosaurs would be super interesting because they’re more intelligent and probably had more complex behaviors. It would be wonderful to see exactly how birdlike they were. My favorite dinosaurs as a kid were always the armored and horned dinosaurs. However, if I had to choose an extinct organism to bring back, it would be the pterosaurs, because there is absolutely nothing like them on earth today.

Are there any extinct species that it might be possible to bring back?

There are recently extinct species such as passenger pigeons and Australian marsupials such as the thylacine [Tasmanian wolf]. But the animal everyone talks about de-extincting is the wooly mammoth. There is a lot of frozen wooly mammoth tissue to work with that comes out of the permafrost in Siberia, as well as a very close living relative in the Indian Elephant. So there is a source of intact DNA and a living host to provide the egg cell. We have to figure out how to swap the nucleus of an elephant with the nucleus of the wooly mammoth.

What is your favorite dinosaur movie?

My favorite is Journey to the Center of the Earth with James Mason, although those were actually not dinosaurs in the movie – they were Dimetrodons, which were a pre-dinosaur, non-reptile prehistoric animal. When I was a kid I also loved the dinosaur movies made in the 50s and 60s with the stop motion special effects by Ray Harryhausen.