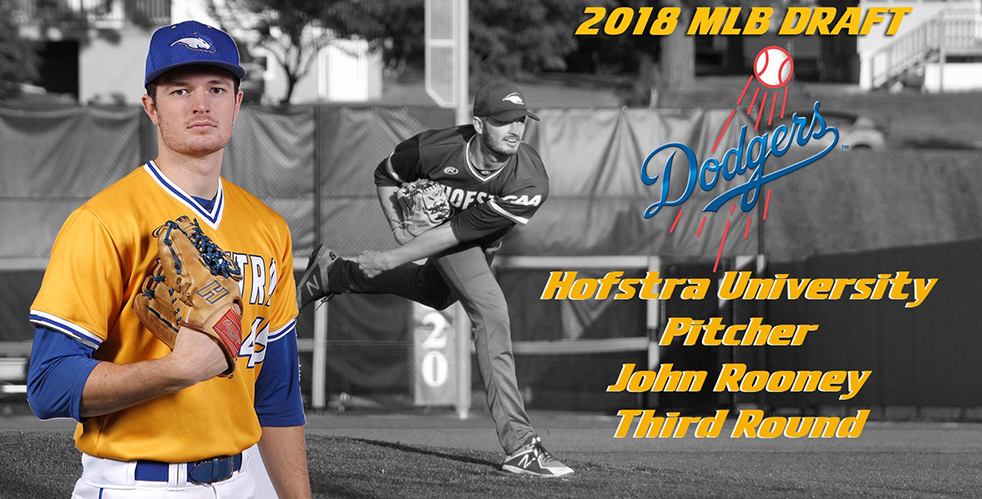 Hofstra University junior pitcher John Rooney (Melrose, NY/Hoosic Valley High School) has been selected by the Los Angeles Dodgers in the third round (104th overall) of the 2018 Major League Baseball First Year Player Draft. He is the first Hofstra player to be drafted since Bryan Verbitsky was a third round selection of the San Diego Padres in 2013.

“It’s easy telling someone when you are growing up that you want to be a Major League Baseball player,” Rooney said. “As you get older that same statement gets a lot harder to say, especially where I grew up. Thank you to those who truly supported this goal along the way. Today I moved one step closer to the Major League dream I have had since I first picked up a baseball and I thank the Los Angeles Dodgers organization for giving me this opportunity. I want to give a huge thank you to my parents, Tracy and Steve, my brother, Joe, and the rest of my family, friends and the Hoosic Valley and Hofstra communities. Thank you to Coach Russo, Coach Habyan and the rest of the Pride staff for their guidance over the past three years. Lastly, I am extremely grateful for my Hofstra teammates, who have become like brothers to me with countless memories on and off the field. Thank you for all of your support and I know that it will remain unchanged at the professional level.”

“I am very excited for John and his family,” said Hofstra Coach John Russo. “John is a special player and an outstanding person. He is extremely coachable, improved every year at Hofstra and is ready to show what he can do at the next level. I look forward to following his progress with the Dodgers.”

A Second Team All-America selection by Baseball America and a Collegiate Baseball Newspaper Third Team All-American, Rooney was 8-2 with a 1.23 ERA and 108 strikeouts in 95 innings over 13 starts in 2018. He threw three complete games and two solo shutouts, while holding opposing batters to a .166 average. He leads the CAA and ranks second in the nation in ERA. In addition, he rewrote the Hofstra record book as his ERA, strikeout total and innings pitched are each single season records, and his 271 career strikeouts are the most in program history. He finishes his Hofstra career with 15 wins (third all-time), a 3.69 ERA and a .239 batting average against.

During the 2018 season, Rooney had a stretch of 49 1/3 innings in which he did not allow an earned run and only allowed one run total during that time. He had three games with 10 or more strikeouts, including a career-best 13 against Norfolk State. He threw at least six innings in all 13 starts and went eight or more innings in five. He combined with Seamus Brazill to throw a no-hitter against Mount St. Mary’s on March 10.