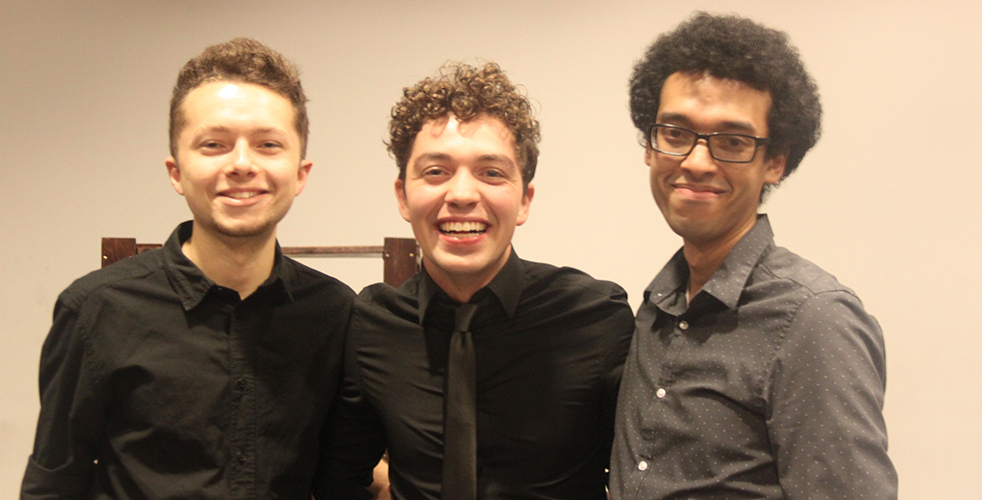 Bright and Brave is the title of a new musical set to have a full workshop production in lower Manhattan next week. It also is a very appropriate description of the enterprising creative team behind the show’s inception – Jack Saleeby ‘16, Noah Silva ‘16 and Peter Charney ’17. While wondering about their future in theater, the drama students decided to take a leap of faith and develop their own show. They collaborated on the book, lyrics and music during Saleeby’s and Silva’s senior year at Hofstra.

Bright and Brave will have a limited run at Dixon Place, an experimental theater house in lower Manhattan, June 7-9, 2018. The friends brought in other former classmates and professors to help mount the production, including Professors Jean Dobie Giebel, who is directing, and Christopher Dippel, who is part of the cast.

Based on a true story and inspired by Morris B. Kaplan’s book Sodom on the Thames and the words and poems of William Johnson Cory and Reginald Brett, Bright and Brave is a story of friendship and love. The idea to write their own musical came to Saleeby, Silva and Charney in the fall of 2015. “We decided one of the best ways to ensure work for ourselves after graduation was to create our own project,” said Saleeby. “Peter and I had already been working on some music together. Noah was in a playwriting class at Hofstra. The three of us decided to hop in and go for it. We gave ourselves the deadline of graduation. If it worked out, great. If it didn’t, we could say that at least we tried.”

For inspiration, they turned to the true story of Cory, a master at Eton College in the 19th century, and two of his students, Reginald ‘Regy’ Brett, who would go on to become the 2nd Viscount Esher, and Charles ‘Chat’ Williamson. “This beautiful love story between two boys in Victorian England really resonated with me,” said Saleeby. “And it connected with Peter and Noah. We based it on a chapter in Morris Kaplan’s book. Spring break of my senior year, we went to meet Kaplan. We told him we wanted to turn his work into a musical, and he gave us a lot of insight, as well as his blessing.”

True to their goal, the team was ready to present a workshop of Bright and Brave two days before 2016 spring commencement at Emily Lowe Hall. “We thought maybe 10 to 15 people would show up,” said Saleeby. “Instead 80 people came. And they loved it. They said you’ve got to keep going with this. You’ve got to keep writing.”

Though Bright and Brave was started because the friends were concerned about their future, they have been working consistently since graduation. Saleeby has been performing with a national tour of The Wizard of Oz. Silva is an Equity stage manager in New York City and is currently a production assistant on The Public Theater’s Shakespeare in the Park; and Charney works in operations at Walt Disney World.

Despite their professional commitments, Saleeby said they made time to continue collaborating on the musical via Google drive and Skype. “The script is almost entirely different from the first time we presented it at Hofstra. But we feel as though we have really found the heart of this story. It’s about falling in love with your best friend, and how to figure out who you are in a world that isn’t supportive.”

By moving forward with the project, Saleeby said, “”We went from college students who had no idea what we were doing to young artists collaborating together and discovering the best way to tell a story through an art form we each love and cherish.”

Show times for Bright and Brave are 7 p.m. on June 7-9. Dixon Place is located at 161A Chrystie Street, between Rivington and Delancey. A ticket discount is available with the code HOFSTRAALUMNI.