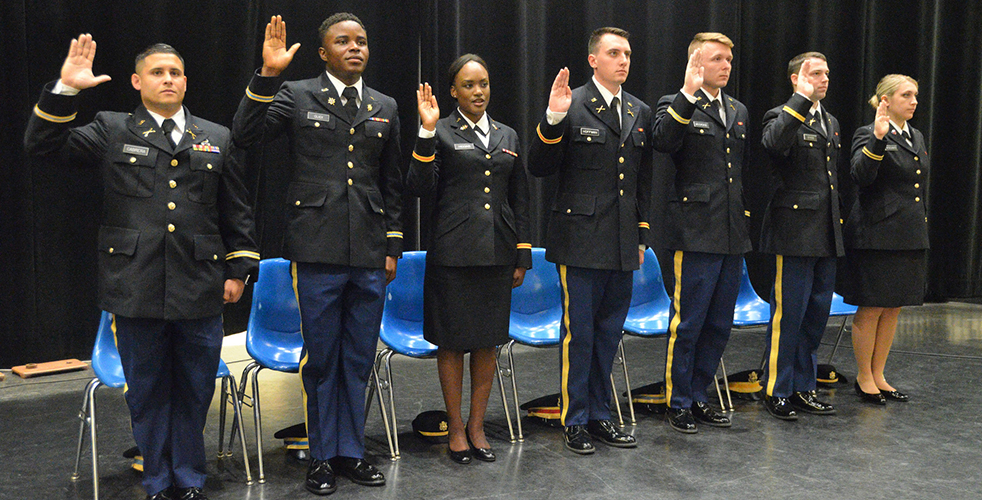 Seven seniors, including four from Hofstra University, were commissioned as officers in the grade of Second Lieutenant (2LT) when Hofstra University’s Military Science Department celebrated its 2018 Spring Commissioning Ceremony.

Hofstra hosts the Senior Army ROTC Program for several colleges and universities in the region. During the emotional ceremony on May 18 at The Helene Fortunoff Theater, the cadets had their 2LT rank fastened on their uniform by family or friends. They also participated in the longstanding tradition of the Silver Dollar Salute, their first salute as an officer.

“As far as I’m concerned, there is no higher calling than to serve one’s country, and the rest of us need to be deeply thankful and appreciative for your commitment,” said Hofstra President Stuart Rabinowitz in his welcoming remarks at the 2018 ROTC spring commissioning ceremony.

He added that ROTC has been a staple on the Hofstra campus since 1951. “It has provided not just Hofstra students but other students from around Long Island and New York City the opportunity to receive military training while pursuing their academic degrees. ROTC students graduate with more than that, however. Discipline, self-motivation and – most important – strong leadership skills.”

“As army officers you will be taking responsibility for our nation’s most precious resource – its sons and daughters,” he said. “You are entering a compact between yourselves and the American people. This compact is a sacred one. Its code is not only legally binding but morally as well. The life of an Army officer involves sacrifice, but trust me. You will receive much in return for the honor of serving your country as a commissioned officer. … Whatever fate has in store for you – this is not about the destination, it’s about the journey. I want you to make that journey a memorable one.”

This year’s commissionees were:

*DMG or Distinguished Military Graduate is an honor bestowed to undergraduates who rank in the top 20 percent of Army ROTC graduates nationwide. DMS or Distinguished Military Student certificate and badge is awarded to those cadets who have demonstrated outstanding qualities of leadership, high moral character, and academic proficiency. They must attain an overall academic standing in the upper half of the university or college class, and attain a Military Science standing in the upper third of their ROTC class.