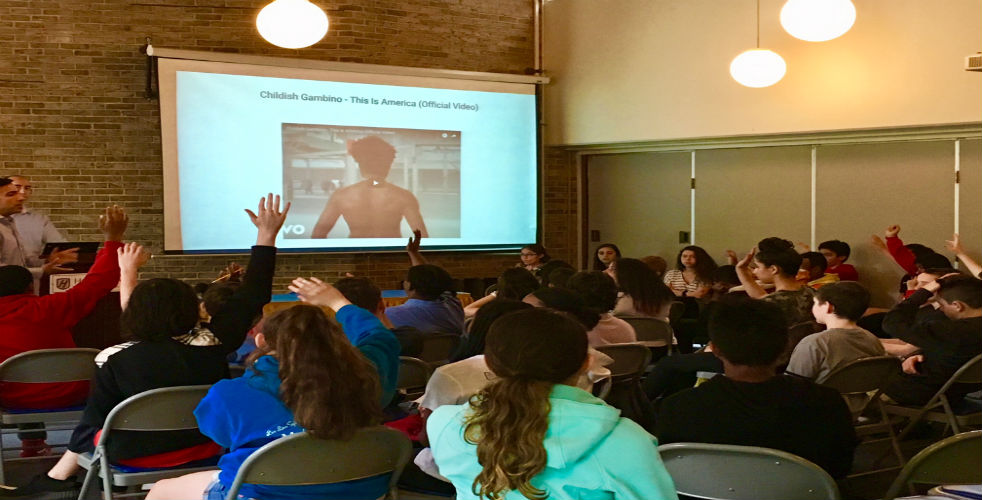 Sixty eighth-graders spent a recent morning at Hofstra discussing gun control and race relations as part of a program that brings students of different backgrounds together to talk about issues facing their communities and the nation.

The program, called Bridges, is a partnership between Hofstra’s School of Education and the Oceanside and Uniondale school districts that encourages ethnically, religiously and economically diverse students to engage in open dialogue about social issues.

The eighth-graders from Oceanside Middle School and Uniondale’s Lawrence Road Middle School began the program in 2016, and will continue meeting through their senior year of high school.

Education Professor Alan Singer, director of Hofstra’s social studies education programs, helped launch the program with Hofstra alums Mitchell Bickman ’04, Michelle Mastrande ’03 and Richard Tauber ’99, as well as Joseph LaTorre, who are now teachers in the Oceanside and Uniondale middle schools. The program was born out of the educators’ desire to close the gap between the mostly white Oceanside district and the mostly black and Latino Uniondale district.

“The Bridges program epitomizes the approach to teaching and learning that we promote in the School of Education,” said Professor Singer. “These teachers engage their students as active learners who are comfortable living and working in diverse settings and examining difficult issues. Our hope is that these young people, as they grow older, will become change agents who will work toward a more equitable and just future.”

Hofstra University’s School of Education places participant-observers and student teachers at Lawrence Road Middle School who work with the students and teachers to prepare them for the program’s meetings.

On May 16, the eighth-graders spent the morning watching and discussing a performance art piece about gun control, as well as rapper-artist Childish Gambino’s recent, controversial music video “This is America.”  In the first year of the program, the students analyzed immigration issues. This year, they are exploring the nature of protest in America.

“This program will show teachers that they can embrace these issues [of controversy] head on regardless of resources at their disposal,” said Bickman, who is the director of K-12 social studies in the Oceanside school district. “It also presents a flexibility that would allow schools which adopt the program to tailor it based upon the needs of their respective communities or in response to current events and world news of the moment.”