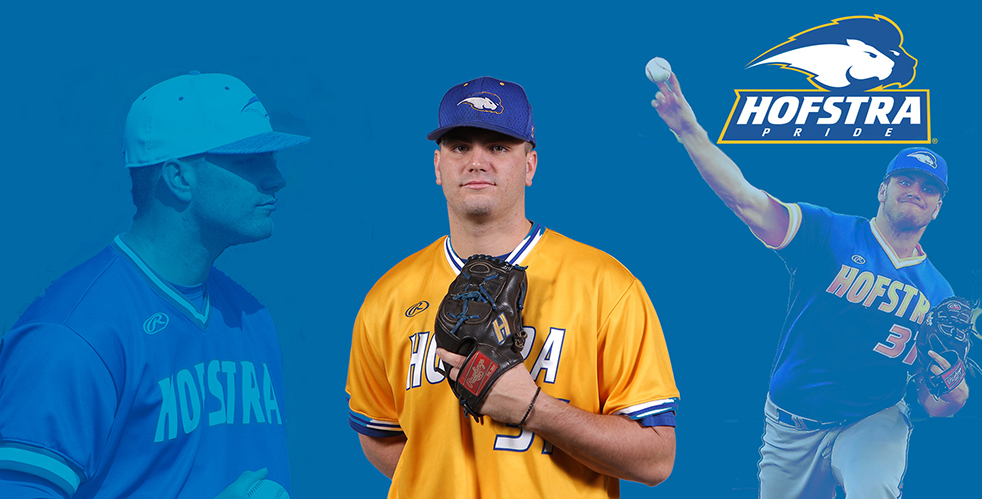 The story of Hofstra University fifth-year senior Matt Weissheier is one of the better ones in college baseball. It is a story of perseverance, self-awareness and redemption, and is inspiring to all who have wanted to give up when things didn’t go their way from the get-go.

Matt’s story started in 2013 when he came to Hofstra out of Kellenberg Memorial High School in nearby Uniondale, New York. An all-league performer in high school, Matt did not see the field as a freshman during the 2014 season as he took a redshirt year. “Matt was my first ever baseball commitment in 2012, even before I got the head coach job officially,” said Hofstra Coach John Russo. “I was the interim coach at the time. So he has always had a special place in my heart because as a coach, you only get one first commitment.”

Expecting to contribute in 2015, he made 14 appearances and did not record a decision in 11 2/3 innings of work. The 2016 season did not get much better as he saw action in just one game. In both seasons, he had an ERA higher than 10.00. “Matt had some weight issues that held him back,” said Coach Russo. “But, to his credit, he never made one excuse about his lack of playing time or blamed anyone for it. He always held himself accountable and that is something I have always admired about him and it is probably why him having success now is so great to see.”

At the end of the 2016 season, during a meeting with Coach Russo, Matt was told that he probably would not really see much action on the field and was offered the opportunity to remain on the team as a manager and keep his scholarship. “Coach Russo thought that the guys would look at me like another coach,” Matt said. “I told him I would think about it, but I knew it wasn’t what I wanted to do. I went to Indiana that summer to play in the Prospect League and kind of disconnected from the world. I met a buddy out there, Triston Polley, who really helped me get back on track. I met him the first day I was out there and he asked me how the season was. I told him the whole story and from then on he was motivated to keep me motivated and make sure that I would achieve my goal of pitching during my senior year.”

Matt dedicated himself to his craft, especially in the weight room as he worked on losing weight and getting in the physical shape needed to succeed at the Division I level.

His efforts paid off as he made 20 appearances (third on the team) and started four games. While he had an 0-1 record and a 5.31 ERA, Matt held opponents to a .280 average and turned in several outstanding appearances including a four-inning stint against Elon where he allowed one hit and no runs.

With another year of eligibility remaining, Matt was asked to return for a fifth year and it turned out to be a great decision for both sides. Going into the Colonial Athletic Association Championship next week, Matt has compiled a 4-4 record and a 3.05 ERA in 12 starts. If the season ended today, his ERA would rank fifth in a single season at Hofstra. Opponents hit just .238 against him and his four wins were second on the team behind John Rooney.

“I was really set on getting through my senior year and then move on into the real world,” said Matt. “I had kind of accepted that I wouldn’t pitch that much, but when Andrew Mundy got hurt things changed. I joke with him about it, that his injury was a blessing in disguise for me since it gave me more opportunities then I thought I would have gotten. I took advantage of them and it made my decision on whether to come back or not difficult. I didn’t decide until the final weekend against William & Mary. My thoughts were that I had a good year and I wanted to do this one more time since you can only play baseball for so long. Of course I never in a million years would have envisioned having the type of year I am having in 2018.”

As a fifth-year senior and a team leader, Matt has naturally gravitated to the role of mentor for the younger players on the Pride roster. “I make sure I tell them, especially the bigger guys, to make sure they keep themselves in shape,” he explained. “I know I wasted three years of my career by not keeping up with my body and who knows what I could have done if I had. I don’t want them to make the same mistakes I did.”

“Matt’s leadership ability is a direct result of his work ethic,” Coach Russo said. “The other players see how he carries himself and how he prepares, and they respect that. So when he has something to say, they listen. Having someone like him on the team makes all of the coach’s jobs easier.”

Another great aspect of Matt’s story is his family history with Hofstra. His older brother, Kevin, pitched for the Pride for two seasons (2014-15) and his younger brother Rob is a sophomore first baseman. “Playing with my brothers has been great and a really surreal experience,” Matt said. “Kevin came in the same year as me, as a junior transfer, and he really was a leader for me. He showed me what I had to do and paved the way for my career. Then having Rob playing first base everyday and looking over at him when I am pitching is a great feeling. Nobody is probably prouder of seeing us play together than my parents, who are at almost every game cheering us on.”

“Having all three Weissheier brothers has been a great experience,” Coach Russo said. “Kevin gave us two solid years and he is a great ambassador for Hofstra Baseball. Rob has grown as a player in his two years and has become a fixture for us at first base, and I think it has been special for Matt to play with both of them. I also think it has been a great experience for their parents, Russ and Kim. They have been great supporters of not only their sons, but all of the players, since day one.”

While Matt hopes to keep playing for the next several weeks, he does know that his time on the college diamond is coming to an end and that the real world awaits. “My post-Hofstra goals are still up in the air,” he said. “I am going to finish my master’s in health administration and it has always been a lifelong goal to be a New York City Firefighter like my father. I recently took the exam, so we will see what happens.”

While Matt may not know what his future plans may be, one thing is certain. If he brings the same level of commitment to his career that he brought to the field during his final two seasons, he will be successful at whatever he does.