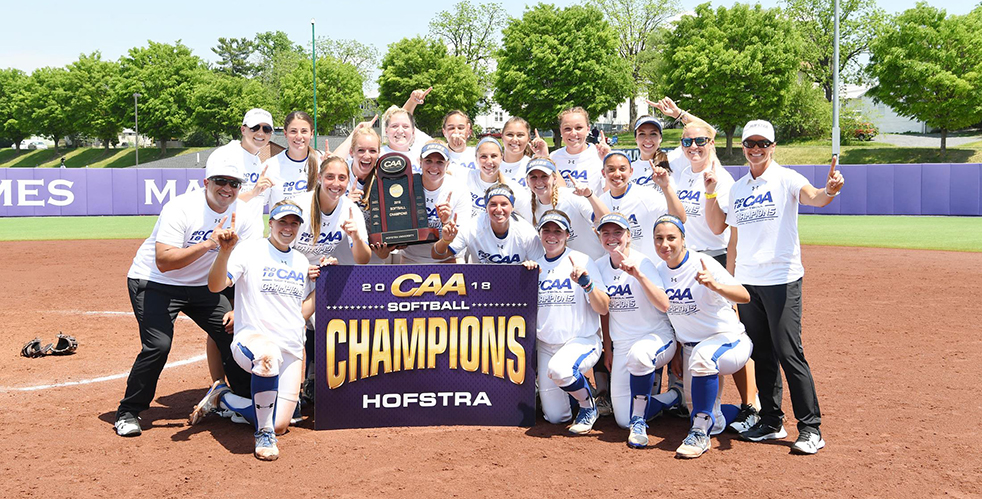 Freshman Sophie Dandola was named the tournament’s Most Outstanding Performer after a shutting the Dukes down in the championship game, earning her second straight win against James Madison after taking the victory in Thursday’s semifinal. Seniors Brittany Allocca and Brielle Pietrafesa and sophomore pitcher Sarah Cornell also earned spots on the All-Tournament Team.

James Madison struck first in the title game, taking a 1-0 lead in top of the third on an RBI single from Odicci Alexander.

Hofstra then used a pair of home runs in the bottom of the fourth, a solo shot from senior Brittany Allocca and a two-run blast from classmate Nikki Michalowski, to take a 3-1 lead. Allocca’s second homer of the day, this time a three-run shot to score Hallam and Pietrafesa, who had both singled, pushed the Pride’s lead to 6-1.

Dandola continued to shut down the Dukes in the top of the sixth, and Hofstra tacked on another run in the bottom of the inning. Singles from Michalowski and redshirt-senior Michaela Transue put runners on before sophomore Kristin Hallam’s single up the middle put the Pride up, 7-1.

The Dukes didn’t go down without a fight, hitting two home runs in the top of the seventh to make it a three-run game. With two runners on board via walks and only one out, Cornell struck out the final two batters to hold on for the win.

The Pride will await its NCAA Regional location to be revealed in the NCAA Selection Show, which will air at 10 p.m. on Sunday on ESPN2.

Notes:
-Allocca’s two home runs gave her 15 on the season, the fourth-best single-season mark in Hofstra history. Her 37 career homers now rank third all-time.
-James Madison was ranked No. 22 nationally heading into the CAA Championship. The Pride’s win over the Dukes in the title game marked Hofstra’s seventh win over a ranked opponent under Head Coach Larissa Anderson.
-Hofstra’s senior class will graduate with bookend CAA Championships after winning rings as freshmen.
-Every player who has graduated from Hofstra Softball since 1989 has won at least one conference championship.
-The Pride has won either a regular-season or conference tournament championship in 24 of the past 27 seasons.