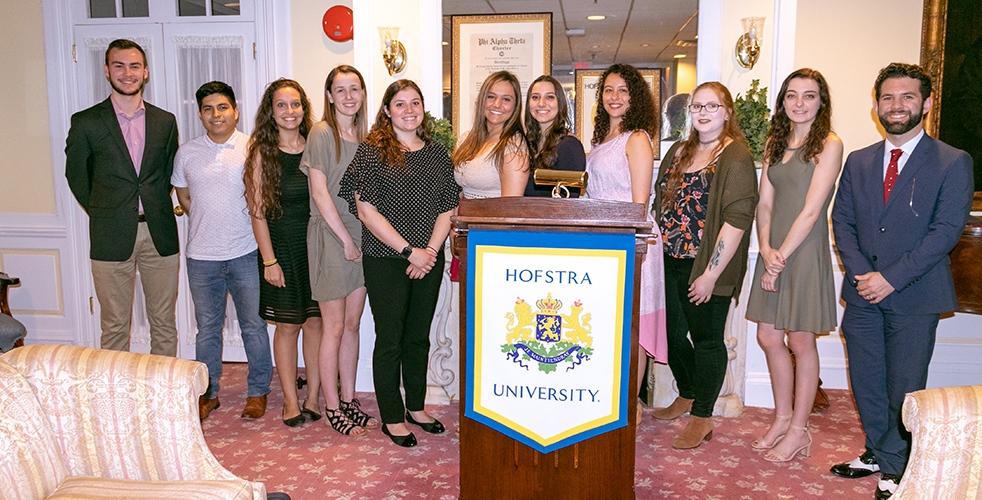 The History Department honored student achievement when it inducted 15 students into Phi Alpha Theta on May 2 in a ceremony at the Hofstra Hall Parlor.

The mission of Phi Alpha Theta honor society is to promote the study of history through the encouragement of research, good teaching, publication and the exchange of learning and ideas among historians.

This spring’s inductees are:

James M. Stead ‘19 received the John Allen Gable Award, which requires students to write an essay on what the study of history means to them. This prize was established in 2008 in collaboration with the Theodore Roosevelt Association. The award is named for John Allen Gable (1943-2005), executive director of the Theodore Roosevelt Association and a former faculty member at Hofstra.

John J. McDonough ’20 received the Robert L’Hommedieux award, established by the late Professor John Walsh to recognize excellence in the study of ancient history or in the classics.

The History Department also presents the Robert L. Payton Award for Best Seminar Research Paper and the Robert L. Payton Awards for Best History Students. Payton was Hofstra’s president from 1973-1976. The Best Seminar Research Paper was awarded to Jillian Pallone ’18 and the awards for Best History Students were given to Joseph Corrado ‘18, Ian Guzman ‘18, Laina Milazzo ’18, and Liliana Lola Solis ’19.