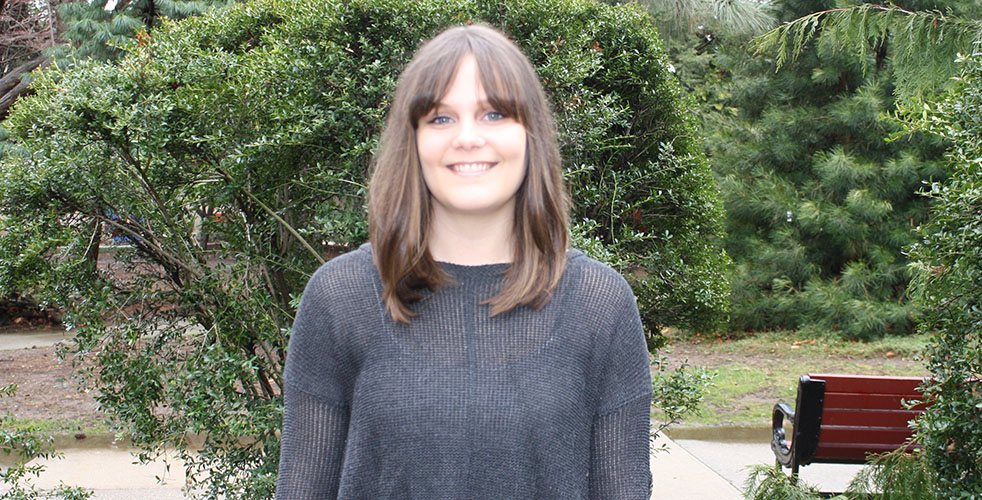 A high school introduction to philosophy sparked an obsession for Hofstra student Casey Grippo. After transferring to Hofstra during her sophomore year, she immersed herself in the study of philosophy and Europe’s age of enlightenment. Now the senior from Garden City, NY, a Provost’s List scholar and consistent Dean’s List student who has been elected to Phi Beta Kappa, was accepted to the preeminent University of Luxembourg to pursue a master’s degree in modern and contemporary European philosophy.

Why philosophy? “I love the way it’s full of never-ending ideas,” Grippo said. “All the questions asked have no single correct answer.”

Grippo is now working on her senior thesis on 18th century German philosopher Immanuel Kant, who is well-known for his conception of human freedom. In her thesis, Grippo traces important changes in Kant’s work on freedom.

“Philosophy is unusual in that it’s about big, exciting questions. In Casey’s case, she’s asking about the nature of human freedom – but it also calls for exactness, precision, and the ability to follow-out a train of thought no matter where it takes you,” said her adviser, Dr. Terry Godlove, HCLAS Senior Associate Dean, Philosophy Professor and author of Kant and the Meaning of Religion. “Casey has all of that – an ear for the big questions, but also the temperament and self-discipline to keep working away at a knot until you get it untied.”

Dr. Godlove encouraged Grippo to apply for the graduate program abroad and recommended her to the director of the program, Dietmar Heidemann, who once briefly taught at Hofstra.

When asked if she’s ever been to Luxembourg, Grippo shakes her head. “The last time I was in Europe was in the 10th grade for a school trip, so I really have no idea what to expect. But I’m very excited to go. It will be an adventure.”

As for what the future might hold, she says, “Ideally I’d like to teach and write, and continue to do research.”

Grippo also says she would highly recommend philosophy as a major to incoming students, unsure about their academic path. “Philosophy is all encompassing. No matter what field you are interested in – the sciences, art, religion, aesthetics, law – philosophy figures into all of it. And it gets you to think about questions you otherwise wouldn’t ask. It sharpens your reasoning skills. It’s all about exploring and questioning the world around us.”