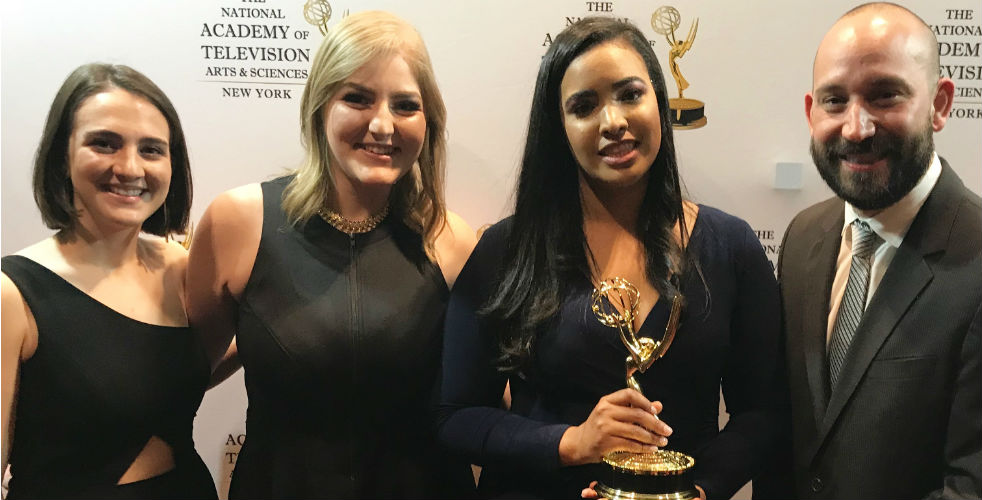 Katherine Falcon, a 2016 journalism graduate of the Lawrence Herbert School of Communication, won a New York Emmy Award for her work as a television producer for Telemundo 47/WNJU.

She was honored for the segment, “Reverse Mortgage Nightmare,” in the business/consumer category, along with reporter Liz Gonzalez and associate producer Karina Rivera. Falcon also received three other nominations for her work as an editing coordinator for the Spanish-language station, which serves viewers in New York, New Jersey, and Connecticut.

“It was great to see her evolution from a student to an Emmy Award winner,” said Mario Gonzalez, one of Falcon’s journalism professors.

Gonzalez, meanwhile, was nominated for his work as a photographer on the Newsday.com multimedia project, “The Cut: A Look at Weight Cutting in Sports” in the sports documentary category.  It was his ninth career nomination. He previously won in 2014 for his work as an editor on “The New Farmers,” a Newsday.com story about a new type of farmer on Long Island’s East End.

In addition, students Nicole Caico ’18 and Alexandra Licata ’19 had the opportunity to work as event volunteers for Cristina Merone ’15, acting membership and marketing manager for the New York chapter of the National Academy of Television Arts and Sciences.  The chapter hosted the 2018 New York Emmy Awards ceremony on April 14th at the Marriott Marquis in New York City.