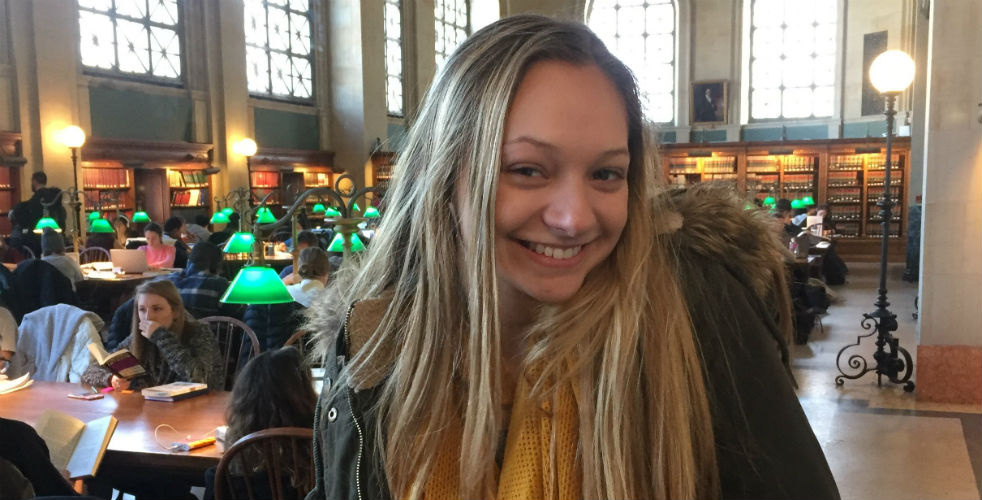 Jessica Kurtz ’19, a double major in English and education, has been awarded a U.S. Department of State Critical Language Scholarship to study Swahili in Arusha, Tanzania, in eastern Africa this summer.

The Critical Language Scholarship (CLS) program is part of a government effort to expand the number of Americans studying and mastering foreign languages. CLS scholars gain language and cultural skills that enable them to contribute to U.S. economic competitiveness and national security.

“I looked at the list of Hofstra’s offered languages and was struck by Swahili. The logical choice would have been to continue my Spanish studies from high school, but I wanted to try something completely unfamiliar and new to me,” said Kurtz, of Boyertown, Penn., who is considering a career in linguistics, interpreting, and education. “I fell in love with the language and wanted to have a deeper understanding of the people and culture of Swahili-speaking countries, such as Tanzania and Kenya. I am incredibly excited and cannot wait for my trip!”

Kurtz, an Honors College student who is also minoring in speech-language-hearing sciences, will be in Tanzania from June 7 to August 8. She will take Swahili classes every Monday to Friday, and travel and see other parts of Tanzania on the weekends with fellow CLS recipients.

She credits Dr. Robert Leonard, her Swahili professor for the past two years and director of the forensic linguistics graduate program, with cultivating her passion for language. “Dr. Leonard’s anecdotes about his time spent in Kenya ignited my interest to travel to Africa. I have him to thank for instilling a curiosity within me not only about Swahili and linguistics, but about the world at large,” Kurtz said. “He also took the time to establish an independent study with me this semester because there were no further Swahili courses available for me following level III.”

Kurtz is one of about 550 competitively selected American students at U.S. colleges and universities who received a CLS award in 2018. She is the fifth Hofstra student chosen for this scholarship since 2010; previous students have gone abroad to study Japanese, Punjabi, Russian, and Turkish.

“Critical” languages are those that are less commonly taught in U.S. schools, but are essential for America’s engagement with the world. CLS helps prepare U.S. students for the 21st century’s globalized workforce. CLS scholars serve as citizen ambassadors, representing the diversity of the United States abroad and building lasting relationships with people in their host countries.

The application process can seem daunting to tackle alone, Kurtz said, but she got  support from Dr. Neil Donahue, the vice provost for undergraduate academic affairs, who serves as coordinator for more than a dozen prestigious scholarship programs available to Hofstra students.  Both Dr. Donahue and Professor Celeste Kaufman from the Department of Political Science reviewed multiple drafts and offered feedback.

Students interested in information about the CLS program and other national and international scholarships should contact Vice Provost Neil H. Donahue or visit the Hofstra Scholarship Nexus.