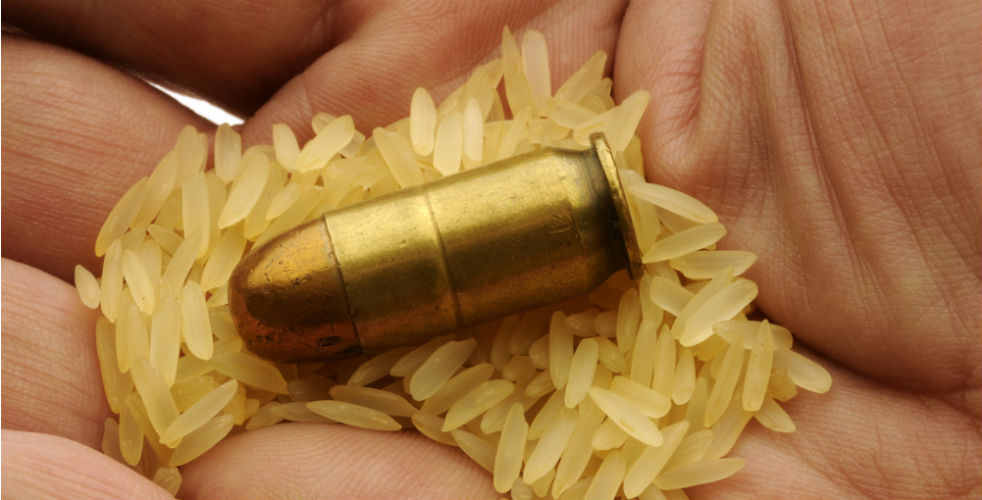 The Center for Civic Engagement’s Globalization Day events this year will focus on the theme, “Hungry for War? Conflict and Global Poverty” – Tuesday, April 3, 2018.  The all-day series of panels and presentations, as well as a film screening, will examine the contrast between the rhetoric of war and the dire conditions of displaced populations.

“In assembling this year’s events, we have tried to juxtapose two contemporary tensions – the alarming specter of war and the plight of those who have been affected and displaced by it – and we hope to raise questions about the motivations of global actors whose confrontational rhetoric stands in stark contrast to the reality of deprivation in many parts of the world,” said Aashish Kumar, director of civic literacy and on-campus events at the Center for Civic Engagement.  “We will unpack the factors that can help explain the persistence of pockets of deep poverty and famine, tracing a line from colonizers to contemporary big business.  At the same time, we will also take a look at how communities are moving beyond conflict, using media to encourage political participation.”

The day’s schedule of events includes:

11:10-12:35 p.m.: The U.S. and Iran: Where Are We Headed?, featuring  Medea Benjamin, co-founder of Global Exchange and CODEPINK: Women for Peace, and the author of the 2016 book, Kingdom of the Unjust: Behind the U.S.-Saudi Connection. Presented as part of the International Scene Lecture Series.

12:50-2:15 p.m.: The Impact of Colonization: Famine in the World Today, which will explore questions such as: How does colonization play a role in today’s famines across the globe? Is it our duty as Americans to help out those countries who are suffering from famine? How can governments make sure the proper relief is given to the people who need it most?

2:20-3:45 p.m.: Our Word Is Our Weapon: Social Movements, Community Media, and Political Participation in Post-Conflict Colombia, a discussion of the peace agreement signed by the Colombian government and rebels of the Revolutionary Armed Forces of Colombia (FARC), which  included a focus on  political participation as a pre-requisite for building a lasting peace in a post-conflict Colombia. Along with providing guarantees for leaders of social movements and representatives of the political opposition, the accords emphasized the important role of community media for citizens to engage in the construction of a democratic culture.

4:30-5:55 p.m.: The Korea Crisis: Weapons Sales and Nuclear Threats, a talk by William Hartung, director of the Arms and Security Project at the Center for International Policy; part of the International Scene Lecture Series.

6:30-9 p.m.: Film: Poverty, Inc., a screening and talkback for a film that has won over 60 international film festival honors for its exploration of the multi-billion-dollar poverty industry.

Additional programming with other University partners will be held on Wednesday, April 4 and Tuesday, April 10.  See the full listing of event descriptions and details at hofstra.edu/globalizationday.

The CCE’s partners for Globalization Day events include the Departments of Sociology, History and Economics, Institute for Peace Studies, Long Island Teachers for Human Rights, Hofstra Cultural Center, Long Island Alliance for Peaceful Alternatives, the Maurice A. Deane School of Law, Honors College, and the Lawrence Herbert School of Communication.

The Center for Civic Engagement is a University institute that plays a major role in Hofstra’s fulfillment of its core objectives. CCE educates students in democratic values by actively engaging them as knowledgeable citizens in collaborative partnerships with their campus, local, state, national and global communities. In addition to Globalization Day, the CCE sponsors dozens of on-campus civic education events each academic year, including Day of Dialogue, Civil Rights Day, International Scene Lecture Series, and Earth Day.