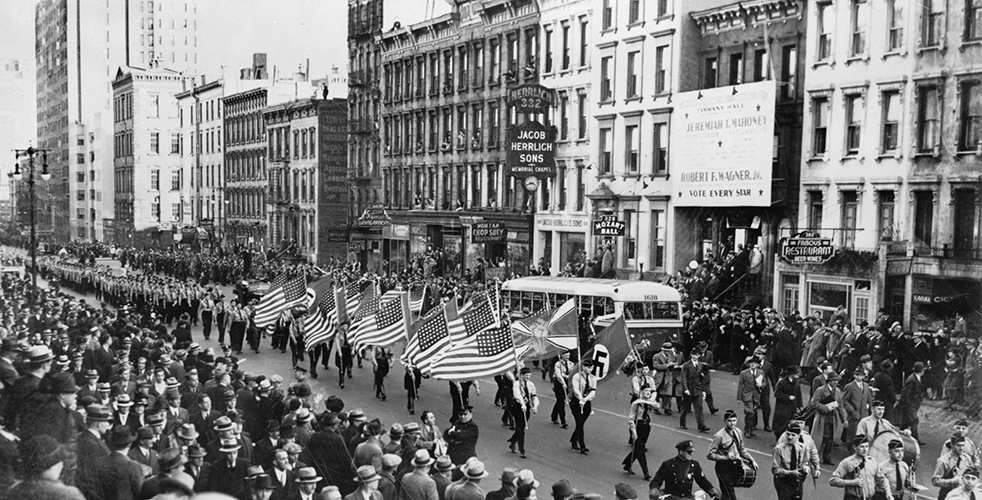 All events are free and open to the public. However, advance registration is requested. To register or for more information, contact the Hofstra Cultural Center at 516-463-5669.

1918-2018: The Rise of Vicious Anti-Semitism; The German-American Bund and the KKK on Long Island and in the Eastern United States

Prejudices have persisted even as the Jews, whose diversity is still seldom recognized, advanced as America’s super-achieving “minority.”

Professor D’Innocenzo is a founding member of Hofstra’s Center for Civic Engagement and co-editor, American Immigration and Ethnicity: Melting Pot or Salad Bowl? His current projects include an NEH grant with East Meadow Library, “Becoming American” and the National Issues Forums, Kettering Foundation’s new deliberation project, “Coming to America: Who Should We Welcome, What Should We Do?”

Directed by Ferenc Török. Based on the short story Homecoming by Gabor T. Szántó

This film, set in 1945, tells the complex story of an Orthodox man and his grown son who return to a small village in Hungary. The village residents are both remorseful and suspicious as they expect the worst. Will these deported Jews demand their illegally acquired property back? All must come to terms with the war atrocities they may have witnessed or perpetrated, as well as their own personal gain versus the rights of the Jewish victims whose property they now possess. In Hungarian with English subtitles. (B/W, 91 minutes)

Annette Insdorf, professor of film at Columbia University’s School of the Arts and moderator of the popular Reel Pieces series at Manhattan’s 92nd Street Y will introduce the film and lead a discussion following the screening. She is the author of Cinematic Overtures: How to Read Opening Scenes. A book signing to follow. Speaker: Cynthia Paces, department chair and professor of history at The College of New Jersey (TCNJ)