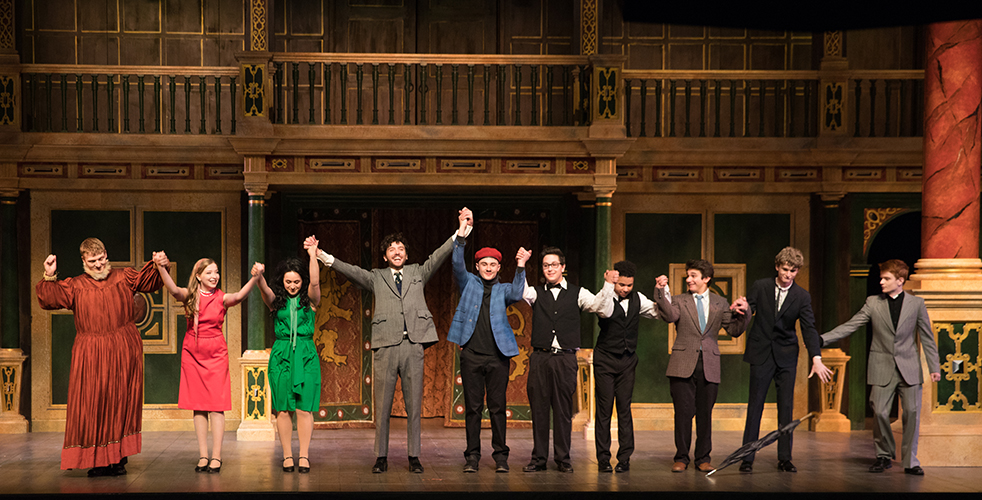 Students from five local high schools took part in an annual competition that Hofstra University hosts as part of its annual Shakespeare Festival, now in its 69th year. Since 1951 the high school competition has allowed younger students to spend the day with Hofstra’s Drama program, perform classic Shakespearean scenes and take workshops in drama and production. This year and last, the students were able to perform on the Hofstra Globe Stage, the most authentic replica in the country.

This year’s competition took place March 5 and 6, 2018. The students spent the first part of the day in workshops on stage combat, voice and speech and improv. Then they performed selected scenes from Shakespearean plays for a panel of faculty members from Hofstra’s Drama program, who offered the students critique and advice. In addition to the acting competition, some of the high school students brought in set models and costume sketches that were judged by Hofstra faculty and design students.

At the end of both days, Hofstra faculty presented awards for acting, costume and set design.

The Tempest – Act IV, Scene I

Performed by Hebrew Academy of the Five Towns & Rockaway Cedarhurst, which participated for the first time in the Festival.  Hofstra faculty praised the students for their use of original music and for the way they incorporated the Hofstra Globe Stage into their performance. Rachel Gottesman, who played “Iris”, received the Best Actress Award.

“Fantastic,” “very strong,” “great give and take” were some of the compliments Valley Stream Central High School received for their comedic performance. Courtney Chamblin received a Best Acting award for her portrayal of “Pyramus”. Also recognized were Willow Chamblin for Set Design and Ayana Franck for Costume Design for their models and sketches.

Hofstra’s faculty praised students from Walter G. O’Connell Copiague High School in Copaigue for their “clever staging.” Female students were cast as Caesar’s conspirators, and Hofstra Professor Cindy Rosenthal said she was “excited to see so many powerful young women combined as a force of nature on the stage.” The school received the Best Ensemble Award.

The students of Wantagh Senior High School reimagined Julius Caesar as a homecoming queen destroyed by gossip and social media. Hofstra’s professors were very impressed by the “dynamic” performances and the team spirit of the actors. The students were also told they used the Hofstra Globe Stage “wonderfully” in their scene. Lindsay Whiteman received a Best Acting Award for her portrayal of “Caius Cassius.”