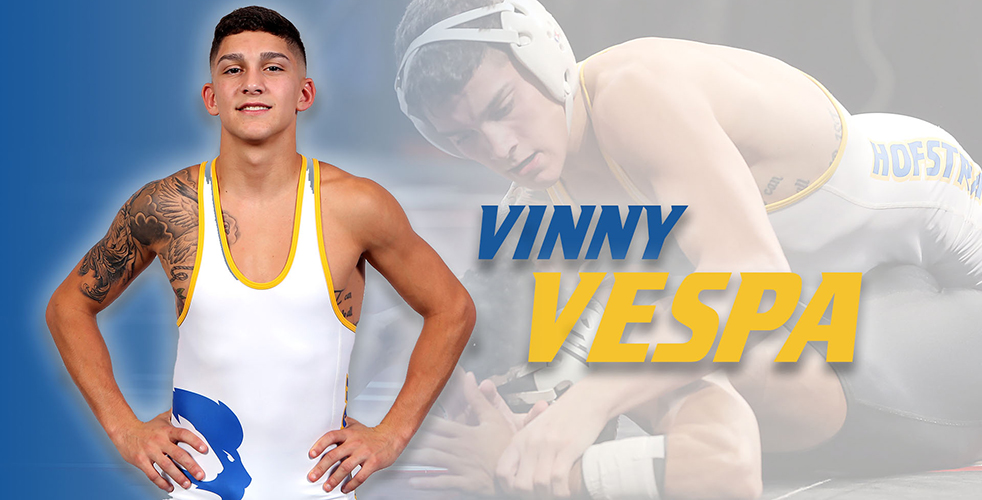 Approximately 160 wrestlers will converge on Hofstra’s David S. Mack Sports and Exhibition Complex Saturday as the University will host the two-day, 2018 Eastern Intercollegiate Wrestling Association (EIWA) Championships. Every wrestler has the dream of being a conference champion, or at the very least to qualify for the NCAA Division I Championships for a shot at being an All-American or a national champion. They have all worked hard and are grateful for the opportunities that are presented this week.

No wrestler may be more grateful than Hofstra sophomore Vinny Vespa. Just six years ago, at the tender age of 14, not only was his wrestling career in jeopardy, so too was his life.

Vespa, a 141-pound grappler from Monroe, New York, was faced with a diagnosis that no child or teenager should ever hear. “You have Hodgkin’s Lymphoma”

It all started as a freshman at Monroe-Woodbury High School. Vespa stuggled, uncharacteristically, in his matches, not always by his opponents hands but rather by his own body. “Throughout the whole season I was having trouble breathing, my body was really itching and I had some other symptoms that I didn’t think much about,” Vespa says. “I was finishing last in team runs when he was one of the best wrestlers on the team. There was no way I should have been coming in last place.  But I was having trouble breathing.”

His mother, Lisa, who imports and sells wigs to chemotherapy patients among other clients, noticed right away and started a six-month trek of doctor visits. The diagnoses included a cold, the flu, bronchitis but not once any mention of a possible blood cancer. After all, here was a strapping, strong, student-athlete.

But young Vinny’s condition did not get any better. Second periods in his matches were taxing. “I was completely exhausted,” Vespa recalled. “I knew something was wrong but I didn’t think it was as big as it turned out. I took losses that weren’t expected. I just wasn’t myself.”

Despite winning the New York State Freestyle Championship after his freshman season, something was still not right. After Vespa qualified for the New York State team at the Fargo Nationals, a trip to the doctor’s in preparation for that tournament that summer saved his life. His mother, knowing some cancer patients, noticed some symptoms but would never think cancer.

It was May 8, 2012. “It was just another normal school day with a trip to the doctors to get checked out before Fargo,” Vespa said. His thoughts weren’t of something physically serious but rather school. “I was worried about getting back to my math class because I was struggling in math a bit,” he recalls.

The doctor gave him a chest x-ray and then asked mother and son to wait for the results. Then the doctor called just his mother into his office for the results. “They found a 10-centimeter mass in his chest cavity that was affecting his breathing,” Mrs. Vespa said. “It had collapsed one lung and he had just 40 percent capacity in the other. I will never forget how I felt when I was told as long as I live”

The news was devastating but she knew she had to be strong for Vinny. “I didn’t know what was going on at first,” Vespa said. “When she came out she just said we had to run over to another doctor to get more tests done at the Maria Fareri Children’s Hospital. I didn’t think too much about it until we were in the car. I fell asleep and when I woke up, she was going 80+ miles per hour and telling my aunt to go to the house and get clothes. When we got to the hospital, my mom broke down in tears and I knew something was seriously wrong.”

A biopsy was performed a day or two later and it took a couple more days to get the results. It was stage 4 Hodgkin’s Lymphoma. “I was pretty much wrestling my entire freshman year with just one lung, Vespa said.

Four months of chemotherapy and radiation followed several times a week for the next 120 days. But Vespa’s support group would not let him get down. “With the help and support of my friends, teammates, coaches, trainers and my mom, it was easy to get through that tough battle.”

His high school coach, Johnny Gartiser, and his trainer John Rahn kept his spirits up and developed training plans that weren’t too rigorous. “They helped me do whatever training I could during the four months of treatment to get me ready for my next year and keep me in the loop to compete when I was ready to come back.”

Return he most certainly did. He was back on the mat for the start of his sophomore season and going for check-ups every two to three months. He took fifth in the New York State at 99 pounds as a sophomore. Vespa followed that with a third-place state finish as a junior, and a fifth-place finish at 120 pounds as a senior.

After Monroe-Woodbury, Vespa attended the United States Military Academy Preparatory School before selecting Hofstra. “West Point Prep was kind of a red-shirt year me,” Vespa said. “Because of that year, when I got to Hofstra I thought I was ready to start and the coaches thought I was ready too.”

Vespa recorded a more-than-respectable 18-17 record as a freshman at Hofstra in 2016-17. He placed fifth in the EIWA Championships, as well. “My only two losses in the tournament came to Mark Gray from Cornell, who placed third, Vespa says. “I showed early on in the year that I could wrestle with him, losing 14-12 in a dual. But I didn’t do that well against him in the EIWAs. I wished I battled him a little better in the tournament.”

But Vespa did pin a childhood wrestling rival, Gerard Daly from Sacred Heart, and beat the second-seed Esteban Gomez-Rivera from American, 5-2 in the EIWAs. “I had some good wins in the EIWAs and fell just one place short of receiving an automatic allocation to the NCAA Championships,” Vespa said. “I was a little upset with that. But overall, I think I had a good tournament and showed what I can do.”

Two months after the 2017 EIWA Championships and five years after his Hodgkin’s Lymphoma diagnosis, Vespa was declared in full remission from Hodgkin’s Lymphoma and is now in a survivorship program. The check-up visits are spaced much further apart now.

The 2017-18 Hofstra season has seen Vespa have his ups and downs both on the mat and in his weight class. He wrestled 18 matches at 133 before bumping up to 141 on February 2. “I expected that I would be moving up to 141 pounds sometime soon in my career,” Vespa said. ‘When (Hofstra Coach Papadatos) Dennis asked me if I thought about going to 141, I said I never thought about it for this year. But it made sense to both of us since I was going to be moving up next year anyway.  I saw a little more of an opportunity to qualify for the national tournament. I feel a lot better at 141. I feel stronger and bigger.”

While the 133-pound opponents were quicker, the 141 opponents are bigger and stronger. “I have to adjust my training and get stronger,” Vespa says. “Right after the move up, I started to adjust my training and lifting style. I’ve been doing my circuits to get stronger and watching what I eat. I definitely feel better at 141 to compete at my best.”

As for his second EIWA Championship this weekend, Vespa, a physical education major who wants to teach and coach after graduation, is analytical. “The EIWA Championships are special,” he said. “I am really grateful for the opportunity to be able to wrestle at Hofstra. It’s one of the biggest events that you can compete in and it is extra special to have it here on Long Island.”

Papadatos knows Vespa and knows what he can do. “Vinny has been a gamer when the stakes are at their highest,” the fourth-year coach said. “He steps up. He has battled some tough things in his life, so I think he realizes that this is not as big of a deal as we all make it out to be. It allows him to relax in these situations and rise to the occasion.”

“Everyone’s goal is to win the tournament,” Vespa says. “My goal is to be an All-American so the first step is finishing in the top four in the EIWAs to get out to Cleveland (2018 site of the NCAA Championships). I feel ready to go. I feel like I will be able to leave everything on the mat.”

No one should expect anything less from Vinny Vespa.