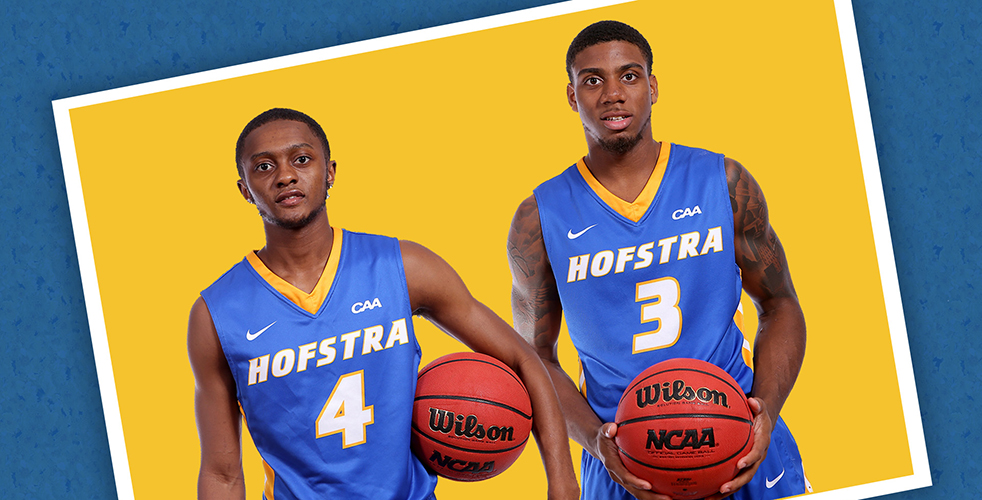 Henry Ford once said, “My best friend is the one who brings out the best in me.” For Hofstra juniors Justin Wright-Foreman and Desure Buie, that sentiment is shared. While it is often stated that your teammates are your friends, that friendship may not always carry on off the court. But in this instance, Wright-Foreman and Buie truly consider themselves best friends.

“We have been roommates for two years and we really are best friends,” said Wright-Forman. “We are with each other all of the time, whether it is at practice, playing cards or watching basketball games. It helps us on the court too, as our chemistry is great.”

“When I got hurt last year, Justin was there for me the whole time and was really positive about the situation,” said Buie. “That drew us closer as friends. We really are with each other 24/7. When you see him, you see me.”

The friendship began during their junior year of high school when both were members of the New York Team in the New York-Philadelphia All-Star Game. “We became friends right away and really became close our senior year,” Wright-Foreman said. “That is when we would text each other all the time trying to pick a school to go to together.”

That is not to say that the two have not been on opposite sides. In one encounter, Buie’s Wings Academy team matched up with Wright-Foreman’s Construction High School team in the quarterfinals of the 2015 New York City PSAL Class AA Playoffs. When asked about that game, Wright-Foreman lowered his head in shame as Buie laughed. Wings prevailed that day, 85-58, on its way to the Class AA Championship.

The two talked endlessly about their recruiting process. “We would discuss which school would be the best fit for both of us, where we could play right away and what it looked like in the next two or three years,” said Buie. “Justin committed before me and he kept after me to commit as well. About a week later, I finally committed too.”

“If Desure was going to go to another school, I was probably going to go as well,” said Wright-Foreman. “We had the same schools recruiting us. We would talk about it everyday, and think about the future and how playing together could benefit the both of us. Ultimately we both decided to come here and it has benefitted us both.”

Having them at Hofstra has benefitted the Pride as well as both have been key players in Hofstra’s success. Wright-Foreman, who did not play much as a freshman behind upperclassmen at his position, has emerged as one of the nation’s top scorers over the last two seasons and is averaging 24.6 points per game this season with seven 30-point games. He has scored in double figures in 50 consecutive games, which is the fourth longest active streak in the nation. Buie played in 34 games off the bench as a freshman and then played in the first eight games last season before suffering a knee injury that forced him to miss the rest of the season. He is back to full strength and has played in 27 games in 2017-18 with 15 starts. He is averaging 5.7 points and 3.2 assists per game. But over the last 12 games, all starts, he is averaging 7.9 points and 4.2 assists per game. Hofstra is 8-4 in those games.

Wright-Foreman could not be happier to have his friend back on the court with him. “It hurt me when Desure got injured,” he said. “We came here to play four years together and we were behind some seniors as freshmen, which we accepted. But now I was feeling bad that my best friend is not on the court with me. We have that chemistry where I feel his pain and he feels mine. So when he was out, I tried to help him out as much as possible and be there for him as best I could. I am the happiest for him being back out there this year because I know everything he went through with the torn ACL and how hard he worked to get back on the court. I think slowly, but surely, he is getting back to the Desure Buiethat everybody knows.”

For Buie, sitting out last year was tough, but it gave him a front row seat to watch his friend’s breakout season. “I told Justin that he is one of the best, if not the best scorer I have ever played with,” he said. “The game comes so easy for him and watching him play last season, I was able to see things that he didn’t. Every night we would go to our room and talk about the game and I would tell him what I saw.”

Those conversations meant a lot to Wright-Foreman. “That was such a major help for me because with him telling me what I may have been missing or if I had a bad game, what I needed to do, he was just there for me and that was the most important part,” he explained. “I wasn’t letting the game come to me, but talking with Desure, with his point guard’s perspective and because he has such a high basketball IQ, I was able to slow down and just play my game.”

Despite the amount of time the two spend together, neither one will admit to ever getting sick of the other when asked.

“That is a great question, but no,” Buie said. “Justin is the jokester. It is fun being around each other. When you are friends like us and have a relationship like us, I don’t think you can get tired of each other. We have fun all of the time.”

Hearing Buie’s answer, Wright-Foreman shook his head and said, “Definitely not! Don’t listen to him; he is the jokester. I never get tired of being around him. When you have a good vibe with a person, that is all you can ever ask for.”

Hofstra hopes that the good vibes between best friends leads to good vibes for the Pride as the calendar turns to March and postseason play begins.