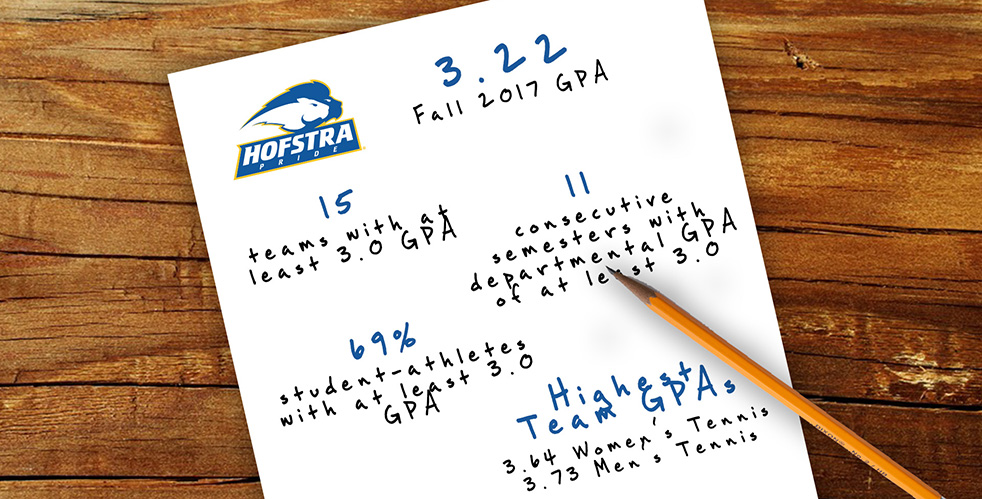 The more than 300 Hofstra University student-athletes had another tremendous semester in the classroom, compiling a stellar 3.22 grade point average during the fall 2017 semester. It is the 11th consecutive semester that the Pride student-athletes have compiled at least a 3.0 GPA.

Hofstra’s student-athletes currently have an overall GPA of 3.23, showcasing their incredible ability to be successful in the classroom and in their respective venues.

The Hofstra Department of Athletics will hold its annual academic recognition ceremony at halftime of the men’s basketball game against William & Mary on Thursday to honor the many Pride scholar-athletes that have excelled in the classroom.

“For eleven consecutive semesters our student-athletes have continued to succeed in the classroom at a very high level,” commented Hofstra Vice President and Director of Athletics Jeffrey A. Hathaway. “I am extremely proud that this commitment to academic excellence continued throughout the Fall 2017 semester. Their success certainly is the result of their hard work in the classroom which is complemented by the outstanding recruiting efforts of our coaches, the continued support of the Center for University Advising and teaching by our dedicated faculty. On behalf of our athletic program I extend our congratulations to every one of these scholar-athletes and to all that have supported them in the academic endeavors.”

The top women’s team during the fall semester was women’s tennis with a 3.64 GPA. The women’s soccer team was great both on and off the field as in addition to their team GPA of 3.50 (second-highest female squad) the team also captured the Colonial Athletic Association Championship and advanced to the NCAA Tournament. All nine female teams at Hofstra had at least a 3.00 GPA.

With the student-athlete GPA being so strong, there were obviously some very strong individual performances in the classroom as 13 student-athletes garnered Provost’s List (perfect 4.0 GPA) and 87 were named to the Dean’s List (3.5 GPA and above).

Hofstra student-athletes academic interests are split among seven different schools at Hofstra as 119 are in the Frank G. Zarb School of Business, 113 in the Hofstra College of Liberal Arts & Sciences, 43 in the School of Health Professions & Human Services, 17 in the Lawrence Herbert School of Communication, 16 in the Fred DeMatteis School of Engineering & Applied Science, two in the Maurice A. Deane School of Law and one in the Hofstra Northwell School of Graduate Nursing and Physician Assistant Studies.