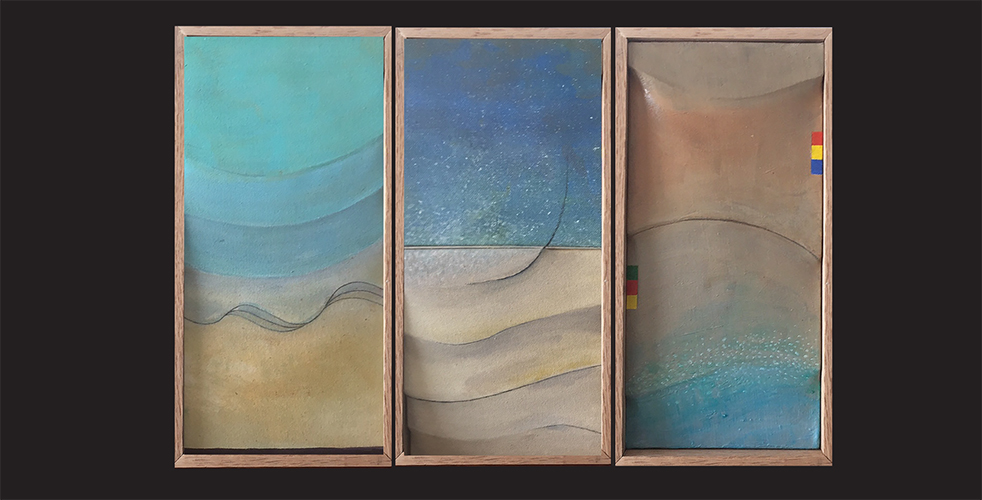 The Rosenberg Gallery at Calkins Hall is presenting an exhibit of paintings and constructions by Warren Infield, professor and chair of Hofstra University’s Department of Fine Arts, Design, Art History. This Long Beach Series will be on display through March 16.

The works in this exhibition were created during 2016 and 2017 in Professor Infield’s studio overlooking the beach and ocean. These pieces – whether painting, mixed media or constructions – owe a debt to the changing seasons, the time of day, changing light and the forms and tracks in the sand that he observed. The proportions and the relationships of the sky to water and to the sand and boardwalk directly influenced his abstractions.

Infield received an NEA grant and a Ford Foundation grant with which he directed an Offset Lithographic Workshop where he collaborated with 24 artists including Chuck Close, Salvatore Scarpitta and Stephen Greene. There is an upcoming exhibition of prints at Hofstra University planned featuring prints from this workshop. His work is in the collection of Le Centre national d’art et de culture Georges–Pompidou, Temple University and Hofstra University Museum. Work has been reproduced in Graphis, Novum Gebrauchsgraphik and Print Magazine. He has received numerous awards for designing high quality art books.

He was educated at Cooper Union, Hunter College and at the Brera Academy in Milan.  During these formative years, he was fortunate to interact with some significant theorists: Ad Reinhardt, Eugene Goossen, George Rickey and William S. Rubin, who later became the director of the Museum of Modern Art. Infield was also acquainted with a diverse group of influential artists: George Sugarman, Ilya Bolotowsky, Carl Holty, Fritz Bultman, Italo Scanga and Stephen Greene.

The Long Beach Series was supported by a grant from Hofstra University.