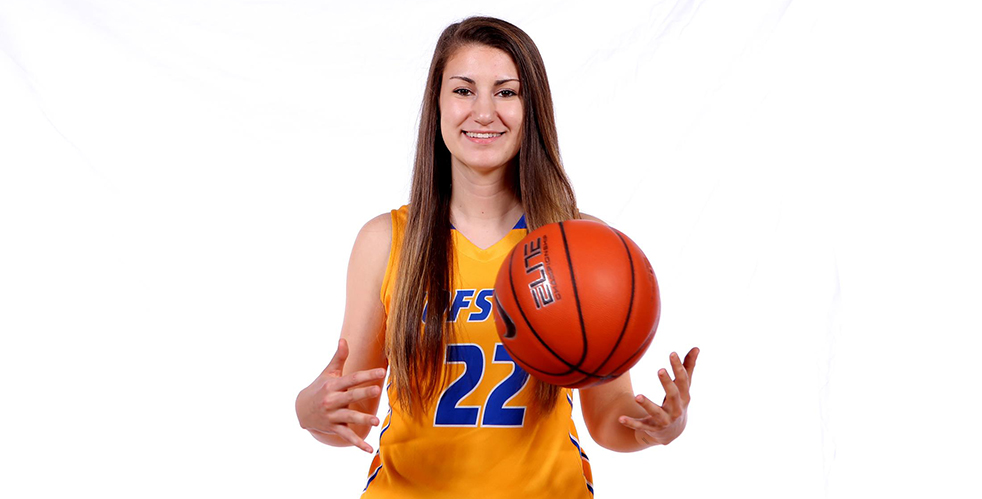 In shooting guard Olivia Askin‘s first season on the Hofstra Women’s Basketball team, her role was a quieter one, challenging the starters in practice but seeing just 23 minutes of playing time that year. Now as a senior, she sees that much playing time in about three quarters. In fact, she’s leading the team in minutes this season, averaging 32.5 per game.

Askin’s basketball journey began when she was growing up in New Jersey, with her dad coaching the local middle school team and her sister playing before her.

“I was always around basketball, and I would go to all the practices and games,” said Askin. “It was just always in the family.”

Askin also played field hockey and lacrosse, but specialized in basketball in her teen years when she began playing AAU (Amateur Athletic Union).

“I had really good experiences playing basketball, and I was more successful in basketball,” Askin said with laugh about why she chose it over the others.

It was when she first began playing AAU basketball in middle school that the idea of playing collegiately first became a possibility.

“When I first started playing AAU in seventh grade, I got my first college letter,” she said. “It was from maybe Tennessee or one of the big name programs, but it was one of those generic ones they send to everybody. But I was so excited, and I was like 12 or 13, and I was like, ‘Wow, this is crazy.’ But just every day at AAU, my coach would be like, ‘You guys are all going to go Division I if you just put in the work.’ So ever since I was 12 or so, it was always in the back of my head.”

Hofstra stood out right away in the recruiting process, showing genuine and continued interest in Askin.

“I think Hofstra was one of the first colleges that really reached out,” said Askin, noting that former assistant coach Bill Ferrara came to many of her games. “He really showed that interest. And talking to other schools, Hofstra would always be there.”

When Askin came in as a freshman in 2014, the team was firing on all cylinders with a core group of upperclassmen including Darius Faulk and some talented sophomores in Kelly Loftus and Anjie White. As a result, Askin’s role that season was not to log a lot of minutes in games, but was crucially important to the team’s success nonetheless.

“We were really like practice players,” Askin said of her role with some of the other freshmen. “We would come every day, and Coach Khan would lead the scout team, which would be on every day, and he was like, ‘Just work and make the team better so when they go out there, they’re ready to play.’ And we took that to heart, and every day we practiced so hard, and the team was successful. And in a way, we felt partly responsible for them being successful because every day in practice we pushed them.”

The team went 20-13 in Askin’s first season, advancing to the CAA championship game for the first time in program history and earning a bid to the Women’s National Invitation Tournament (WNIT).

The following season, Askin’s sophomore campaign, the Pride continued its success, going 25-9 and advancing to the quarterfinals of the WNIT. Throughout the regular season, Askin continued to battle in practice, but with a number of her teammates unable to compete in the WNIT, Askin got her chance.

She played 18 minutes off the bench in the WNIT First Round game against Harvard, before earning her first career start in the second round, an 82-74 win over Villanova. She started the next two games too, helping propel the Pride to just its second trip to the quarterfinals.

And when her junior year began, she held onto that starting spot, getting the nod in 15 games.

“It’s definitely a big change,” said Askin of her increased role. “I always took it seriously no matter if I was playing two minutes at the end of the game or 40 minutes.”

So far this season, she’s started every game and rarely left the floor, with her voice often the one heard most on the court.

“Going into the season, I had a lot of conversations with [Head Coach Krista Kilburn-Steveskey] just about my voice and leading more,” said Askin. “So at practice I just try to always communicate, and even on the court, when we’re on defense, just yelling out what defense we’re in or reiterating what the coaches said in timeouts. I’m trying to be that extra voice.”

With a career trajectory such as hers, and with a role as specific as a shooting guard, Askin’s time at Hofstra has produced a few statistical anomalies. She has taken just four free throws in her four years, playing the first 1,118 minutes of her career without taking one before she went to the line as a result of a flagrant foul at Columbia on Dec. 11. (She’s made all four that she’s taken, for the record.)

“Going into this year, my dad was like, ‘You know you’ve never taken a free throw in your college career. You might be the only person that’s ever done that,'” Askin laughed. “I never thought I would take one to be honest, and now I’ve taken four. If I graduate 100 percent, I’ll be happy.”

Off the court, Askin has been equally as successful in the classroom, carrying a 3.54 grade-point average into her final semester. A community health major, Askin has been interning at the Long Island Jewish Medical Center and plans to attend nursing school after graduating from Hofstra.

“Being out in the community and meeting people outside Hofstra is something I haven’t really done because I’m always here,” she said. “Networking with other people and learning more about the field I’m going into has been a big part of this year, and it’s been really exciting.”

And on the court, with just seven games left in the regular season, Askin hopes to continue contributing and end her career on a high note.

“It’s been a great four years,” Askin said. “My teammates and coaches and everyone surrounding basketball, everyone’s just great and friendly and I’ve had a really great experience.”