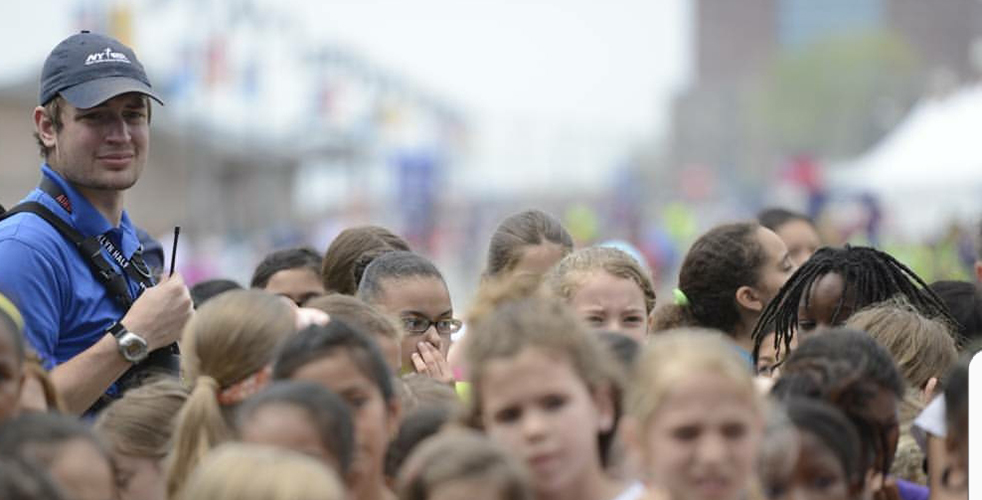 Whether he was writing for Hofstra’s literary magazine, singing with the Hofstra Dutchmen or fighting the undead as part of Hofstra Versus Zombies, Alex Demarest ’14 made every day on campus memorable.

Now his talents for storytelling, multitasking, and embracing the moment are serving him in his role as youth program assistant manager for New York Road Runners (NYRR), the organization behind the largest marathon in the world, the TCS New York City Marathon, as well as the Airbnb Brooklyn Half and the United Airlines NYC Half.

The lion’s share of Demarest’s job revolves around email communication and social media for NYRR. This includes monthly newsletters, event registration emails and program management updates. He also manages projects within NYRR’s youth program, Rising New York Road Runners, such as the “1 for You 1 for Youth Program,” that provides kids in need with high-quality running shoes.

While he was a student, Demarest, an English major with a concentration in creative writing, relaunched the magazine FONT and founded the Hofstra English Society. He also co-founded Hofstra Versus Zombies, which continues to battle the “walking dead” on campus to this day. 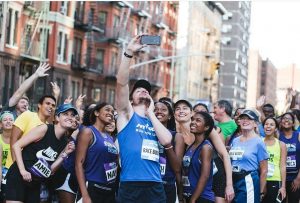 What prompted your decision to major in English at Hofstra? Did you have any plans for what you would do with your degree?

I love stories. I’m the guy sitting on the edge of his seat at the movies; telling you that you absolutely have to read some book or watch some show; and rooting for the Super Bowl to tie at the 2:00 warning – simply because it makes a much better story.

Majoring in English allowed me to explore stories. What makes them good? What makes them bad? Why do so many humans turn to fiction and nonfiction on a daily basis to expand their lives, be it the podcast you listen to on the subway, the Netflix series you binge on a Tuesday night, or the beach book you decide to read for the fourth summer in a row.

Entering Hofstra, I was contemplating a double major in English and education. Then I double-minored in psychology and religious studies. I felt that the liberal arts focus gave me more options. I had no idea what I wanted to do with my life as a first-year student, and I spent my four years learning about people, culture, and communicating my thoughts. In the end, it all paid off. Of course, with the creative writing concentration, a novel might someday be in the future. I’ll keep those plans vague in order to keep expectations low!

What did you most enjoy about your studies?

The class discussions. I loved when professors would throw their lectures out the window, toss some ridiculous question out to the floor, and spend the entirety of class allowing the students to debate. I love being exposed to new ideas and having my mind changed while also perhaps changing the minds of others.

My personal favorite moment was when a professor once walked into class, sat behind his desk and challenged us: “Prove to me you’re not in the Matrix.” We all had a bit of an existential crisis that day.

You helped to relaunch FONT, the student literary magazine at Hofstra. What made you undertake this project?

At the beginning of my senior year, I realized that there was no English-focused organization for students to read, write, and share literature with each other. I began working closely with the English Department and other dedicated English students to create the Hofstra English Society, a student organization dedicated to the three pillars of the English education: reading, writing, and publishing. Out of the writing and publishing aspects of that organization came FONT, the student-run literary magazine, which had been on hiatus. I wanted to leave the Hofstra English Department with something that could be expanded upon, and also give the amazing student writers there an opportunity to publish their work. 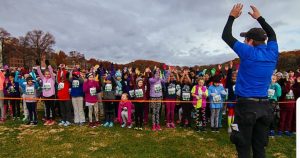 You are currently working at NYRR as the youth program assistant manager. Can you explain how your studies and experiences at Hofstra have helped you?

My job at NYRR has two major components: communications and programming. I manage all of the external mass communications for NYRR’s youth program, Rising New York Road Runners. Every day I’m writing and editing copy and looking for new and interesting ways to share information about the over 1,000 schools and 267,000 kids across the country who participate in our program.

My studies in English literature and creative writing are the foundation of my job. I consider it a privilege to share the stories of the kids we work with, as well as all the great things NYRR does beyond organizing the New York City Marathon.

As my job has different components, I always viewed my education at Hofstra having two major parts – my academic side and my extracurricular side. Right from the beginning, I spent my time outside the classroom doing as much as I possibly could. I had the privilege of founding and co-founding two major clubs on campus, singing with the Hofstra Dutchmen, playing rugby, and participating in a number of leadership workshops.

I have applied all of that programming experience to my job at NYRR. I have used it to help enhance Rising New York Road Runners and our summer scholarship program, Run for the Future, for which I am an assistant coach. My proudest accomplishment is the work that I have done managing NYRR’s youth shoe distribution program. The “1 for You 1 for Youth Program,” a partnership between NYRR and New Balance, has donated over 4,500 pairs of new running shoes to kids in our program, and in the coming year we hope to exceed that.

While you were a student you started the tradition of Hofstra Versus Zombies. How did that begin?

It began the way many good ideas begin – with four first-year students sitting in a dorm in the middle of the night the first week of the semester. We had heard about similar clubs happening at other campuses and became really passionate about bringing it to Hofstra. It wasn’t just our enjoyment of zombie culture and nerf guns, but the potential of creating a real student community that Hofstra had never seen before. It started slow, but after a year it took off. I am happy to go back and stalk the group on Facebook every so often to see that the club is still going strong. It is one of my proudest achievements at Hofstra.

Any recommendations to help the rest of us to prepare if there was an actual zombie apocalypse? Where to go? What to stockpile?

– One. Always have at least two escape plans. It is simple tip, but in a zombie apocalypse, no weapon or survivalist skill can save you if you get cornered by the horde.

– Two. In honor of the 2009 cinematic masterpiece Zombieland, Rule #23: Enjoy the little things. No matter what you’re going through – whether it’s a zombie apocalypse or just a crummy day that feels apocalyptic – find something you love and don’t let anyone ruin it for you. It will keep you sane, even if that something is as simple as a Twinkie.