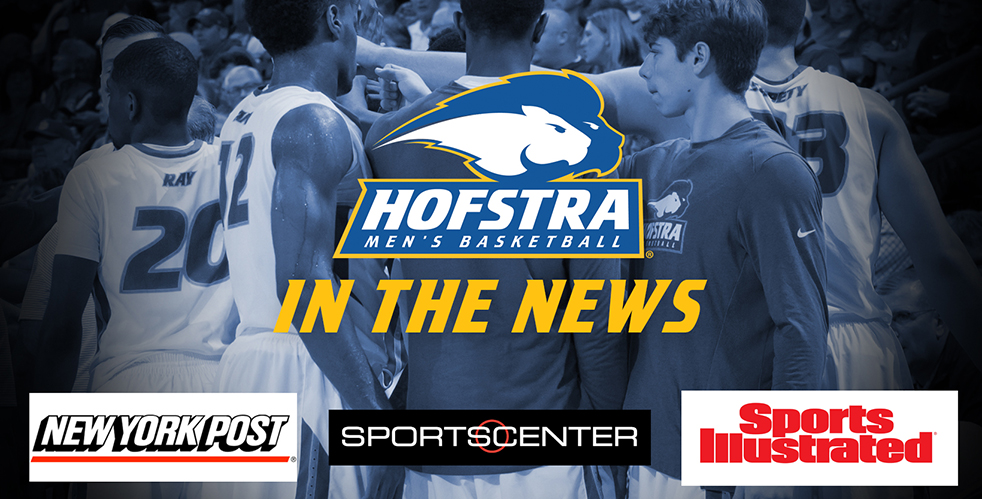 The Hofstra Men’s Basketball team has certainly opened the eyes of the national media during the month of January.

Don’t miss your chance to see what all the excitement is about during the month of February as Hofstra has five home games in February following Thursday’s game against Northeastern. Big home game on Thursday, February 1 when Hofstra hosts UNCW in a special Throwback Thursday game.

Hofstra has won three of its last four and five of its seven games during the month of January to improve to 12-8 overall and 5-3 in the Colonial Athletic Association, but the attention from the national media has shined a light on the program that normally isn’t shown to programs at the mid-major level.

During this month of media attention, Hofstra has seen itself open ESPN’s SportsCenter on a pair of occasions, while also having features in both Sports Illustrated (SI.com) and the New York Post.

The two SportsCenter highlights during January make it three this season for Hofstra as the Pride’s win over Monmouth on December 6 was also featured on the show.

This coverage is in addition to the quality and tremendous coverage the program has received from the likes of Newsday, News 12, NYC Buckets, WRHU (88.7 FM) and the Hofstra Chronicle.

The first national spotlight was on January 5 when Hofstra opened the 11 p.m. SportsCenter courtesy of a three-pointer at the end of regulation from junior Justin Wright-Foreman to tie the game against James Madison. That shot and the ensuing 87-81 overtime victory over the Dukes led that night’s ESPN show.

The buzzer-beating moments continued for the Pride on January 11 when Hofstra once again opened SportsCenter as freshman Jalen Ray drained a three-pointer at the buzzer to beat Towson, 76-73. That highlight, along with the other buzzer-beating highlights made for a nearly two-minute segment to open Scott Van Pelt’s midnight SportsCenter.

The December 6 appearance on SportsCenter showcased Hofstra Men’s Basketball as the #1 Top Play as Ray hit his first game-winner of the season to defeat Monmouth, 85-84.

As always, tickets are available via HofstraTickets.com, by calling (516) HOF-TIXX or by visiting the Hofstra Athletics Box Office in the lobby of the David S. Mack Sports and Exhibition Complex.