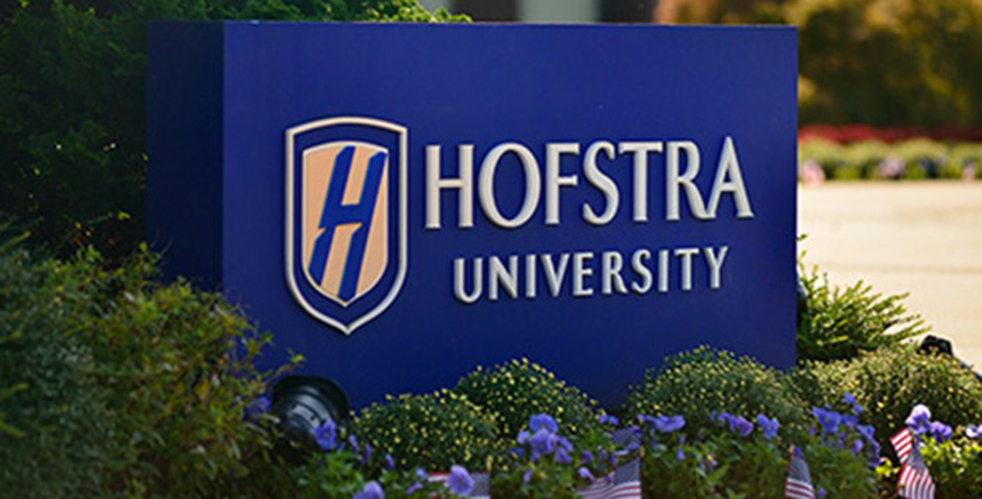 The Center for Entrepreneurship has tapped a group of experienced business and economic leaders to serve on its new Advisory Board to provide financial support, student mentoring and guidance on program development.

The center also announced the appointment of Dr. Richard N. Hayes, Ph.D, associate professor of management and entrepreneurship in the Frank G. Zarb School of Business, as its first academic director. In his role, Dr. Hayes, who has worked closely with the center since its inception in 2015, will build an academic framework for all center programs, including the Hofstra-Digital Remedy Venture Challenge.

“This is the next step in the development of the Center for Entrepreneurship as a vital resource for the campus and regional innovation economy,” said Mark Lesko, vice president of economic development and executive dean of the center. “Richard Hayes and our new Advisory Board bring a wealth of expertise, experience and enthusiasm to the Center, and to our student entrepreneurs. It’s an extraordinary opportunity for our students to learn from the best business minds in academia, the private and public sectors.”

Here are the bios of the newest members of the Center for Entrepreneurship:

Deeply committed to global entrepreneurship and particularly to entrepreneurial development in Africa, Dr. Hayes also holds an appointment as a Visiting Associate Professor in the Faculty of Management at the University of Johannesburg, South Africa.  Richard has also taught at the Ghana Institute of Management and Public Administration, the Lagos (Nigeria) Business School and Africa University (Zimbabwe).  He is the Vice President for Finance and Treasurer of the International Academy of African Business and Development (IAABD) and will be the entrepreneurship track chair for the 2018 Africa Academy of Management (AFAM) meetings that will be held in Ethiopia.

He earned a Doctor of Philosophy (Ph.D.) degree from the Kellogg School of Management at Northwestern University.   He also holds a Bachelor of Arts in Business Administration in Corporate Finance from Morehouse College (Atlanta, GA), where he was elected to the Phi Beta Kappa Society, the United States’ premier academic honor society, a Master of Business Administration from the Goizueta School of Business at Emory University (Atlanta, GA) and a Master of Divinity degree from Duke University Divinity School (Durham, NC).

Kelley Coughlan Heck joined TRITEC Real Estate Company in 2014 and now serves as a developer. Heck’s focus is on entitlement, acquisitions, financing, leasing, community engagement and business development projects. She provides financial analysis and due diligence on the development, planning and management of projects in the Long Island market. Prior to joining TRITEC, Heck worked in New York for several years at Bloomberg L.P., where she served as a deputy manager in the equity analytics department prior to becoming an account manager for equity buy-side clientele throughout Greater New York. She also formerly worked for the Town of Nantucket, MA as a marine research technician on a shellfish propagation project that aimed at developing a more space-efficient and cost-effective method of restoring scallop and clam populations in the Nantucket Harbor. Heck holds a Master of International Business degree from The Fletcher School at Tufts University, concentrating on the complexities that tie together international finance and environmental resource conservation. She also received a B.A. in International Studies with a focus on Economics and Chinese from Middlebury College.

Daniel P. Deegan, (St. John’s University School of Law, 1989) heads up the Industrial Development Agency (IDA), Municipal Incentives and Government Relations practices, with particular emphasis on facilitating and implementing responsible real estate development projects. He specializes in real estate development law, zoning law, municipal incentives/IDA law, and government relations/municipal law. He is experienced in representing companies before the IDAs in Nassau and Suffolk counties. Deegan has been awarded an “AV” legal ability and ethics rating by Martindale-Hubbell Law Directory – the highest rating this nationally recognized publication has established, based on extensive confidential peer review surveys. He has been selected by his peers for inclusion in New York’s Super Lawyers every year since 2010. He was also peer selected in LI Pulse Magazine as a “Top Legal Eagle” for being the “most unbeatable” in real estate. Deegan is admitted to practice in New York and New Jersey. In addition, he is admitted to practice before the Federal Courts of both New York and New Jersey, including the United States Supreme Court. He is a member of the American Bar Association and the New York State Bar Association. In the mid-1990’s, he was appointed city attorney for the City of Glen Cove, by then-Mayor Thomas R. Suozzi, and served in that capacity through 2006. Mr. Deegan was elected to the Board of the Long Island Association in 2015. He also serves on the Board of the New York League of Conservation Voters (NYLCV) and is vice chairman of the Long Island Chapter. He has served as President of the Glen Cove Rotary, and as a member of the Board of Directors for the Gift of Life Foundation and, currently, as a member of board of North Shore Sheltering Program, Inc., a shelter for the homeless. He is a member of the Commercial Industrial Brokers Society of Long Island (CIBS) and was recognized as the “Associate Member of the Year.” He is a member of The International Council of Shopping Centers (ICSC). He is a frequent lecturer to trade groups and others on the law and practice relating to economic development incentives and industrial development agencies. His article on the benefits of IDA was published in the New York Real Estate Journal and the Suffolk Lawyer. He earned his B.A. from Providence College in 1986 and graduated Chaminade High School in 1983.

John Dragotta is the CEO of Sovereign Global Advisors, a financial advisory firm based on Long Island. He earned a BBA in Finance from Hofstra University in 1997. Dragotta began his professional career working for a retail firm where he was consistently recognized among the top five largest producers.  At 25, he moved to another company and started his first branch office. Within two years it became that company’s largest branch. A few short years later he started his own broker dealer, Sovereign Global Advisors. Today, Sovereign is a broker dealer and an investment advisory firm, with reps working in-house and as Independent Financial Advisors across the country.

Tom Garry serves as an attorney leader at Harris Beach PLLC on economic development and public finance projects involving all phases of a commercial and residential development from site plan applications to final approvals.  He represents developers and municipalities in litigation involving such matters as land use and zoning, and breach of contract. Garry is recognized for his experience in election law and represents clients in New York state courts, including the Appellate Divisions and the Court of Appeals.  He represents municipalities and serves as special counsel to many towns and local agencies and has provided legal advice to municipalities and their agencies on issues such as the development and implementation of a master plan, the creation and impact of municipal easements and restrictive covenants, compliance with the State Environmental Quality Review Act, the creation of planned development districts, zoning overlay zones, transportation issues and smart growth projects.  He is a former member of the Long Island Regional Planning Council, an agency charged with developing Long Island’s growth strategy. Representative matters include: New York state counsel for the Hillary Clinton Presidential campaign – Hillary for America. Garry has acted as counsel to numerous New York political campaigns including statewide and as Counsel to the Town of Babylon on Wyandanch Rising, a transit-oriented development project, and Counsel to Catholic Health Services of Long Island, advising on economic development projects.

Kevin Hesselbirg joined The Gemini Companies in 2017 as the Chief Executive Officer. As CEO, Hesselbirg oversees all areas of the companies including fund administration, fund accounting, transfer agency and shareholder servicing, client services, and legal administration. He is also responsible for expanding product offerings and service capabilities.  Prior to joining Gemini, he held the role of CEO of Primatics Financial, a leading SaaS provider of finance and risk solutions for the banking sector. In other previous roles, Hesselbirg was the CEO of OpenLink Financial, a leading software developer of financial energy and trading and risk management solutions, as well as Audit Manager at Ernst and Young. He subsequently advised various private equity organizations, including TA Associates, on financial services investments.  Hesselbirg received a B.S. from Fordham University.

Paul Homer joined Northwood Ventures in 1999, after serving as a financial analyst for a venture capital-financed retailer with over 80 stores. While there, he evaluated various capital raising alternatives for the rapidly growing firm and developed a financial reporting system. In addition to reviewing new investment opportunities, and serving on the board of several of Northwood’s portfolio companies, he is a director of both Long Island Lutheran Day School and Long Island Lutheran Middle and High School, where he also serves as treasurer. For several years, Homer was a director of the Long Island Capital Alliance. He received an M.B.A., with distinction, from the Frank G. Zarb School of Business at Hofstra University, and received a B.S. in Finance, magna cum laude, from Bentley College.

Founder and CEO of Magna

Joshua Sason is the Founder & CEO of Magna. At just 22-years-old, he founded the company in 2009 out of his bedroom, quickly growing it into a leading worldwide entrepreneurial and investment brand with multiple strategies and offices in New York and Sydney.  Today, Magna is widely recognized as one of the world’s foremost creative and tactical firms; building disruptive companies and investing across the worldwide public and private equity markets and the entertainment industry with a focus on non-correlated overlooked and underserved opportunities.  Additionally, Sason founded the construction company, Sason Builders, and the talent acquisition technology company, Mainz (acquired in 2017), both of which continue to thrive and operate as portfolio companies within Magna’s Ventures division.  As a producer, he’s financed several feature films and documentaries through Magna Entertainment including HBO’s “The 50 Year Argument,” and 2016’s, “Bleed for This,” both in partnership with film legend Martin Scorsese. He continues to actively write and produce music through Magna Entertainment’s interests as well.  Sason is involved in various philanthropic causes related to music, the arts and entrepreneurship, fostered through the firm’s eponymous Magna:initiative which has partnered with organizations including: The Grammy’s, Defy Ventures, Mid Island Y JCC and others. He graduated magna cum laude with honors from Hofstra University.