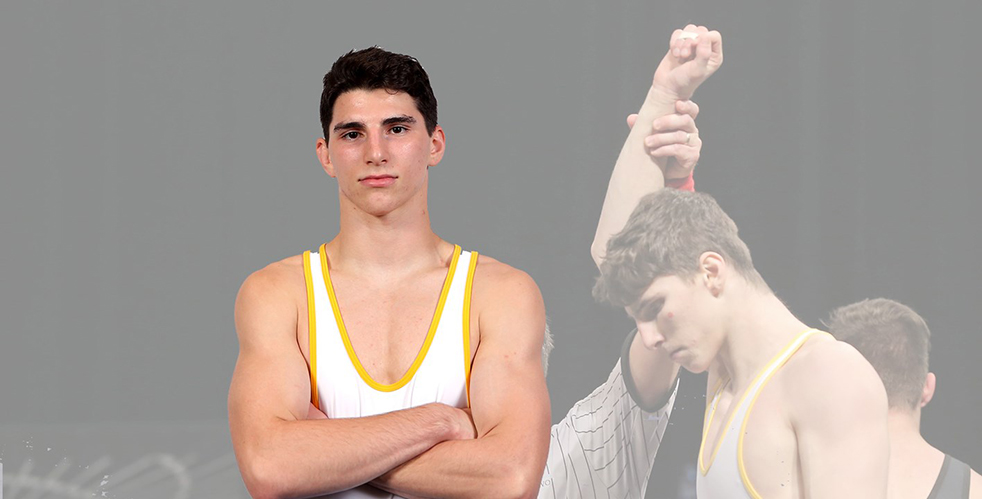 While it is not unusual to see a college freshman wrestler make a big splash in his first year, it is also not that commonplace either. The jump from high school to college is not an easy one, especially in physical sports like wrestling and football.

While every newcomer seemingly is a scholastic All-American or carries a bag full of honors into college, Hofstra sophomore grappler Sage Heller had honors but made a quieter but nonetheless impactful entrance into college wrestling. That arrival included leading the Pride in victories in 2016-17 and, beyond that, earning a spot on Team USA and a medal at the Maccabiah Games in Israel last summer.

Heller wrestled for four years at Deerfield High School in Deerfield, Illinois. He was a three-time Illinois State Championship qualifier including a second-place finish at 170 pounds in the 2016 state championships as a senior after also qualifying at 160 pounds as a junior and 138 pounds as a sophomore.

Heller was named the conference Wrestler of the Year as a senior and he was selected Deerfield’s Most Valuable Wrestler twice. He recorded school records for near-falls (256 pts.) and tech falls (15) as a sophomore, and pins (32), reversals (40) and team points (290) as a junior. Yet, despite the accolades and records, he was somewhat under the radar come recruiting time.

“He was dangerous on the mat,” Hofstra Head Wrestling Coach Dennis Papadatos said of Heller in high school. “Sage had a big upside. He had a lot of natural ability and I felt he was going to be better in college than he was in high school. He seemed very coachable and he has been.”

“I felt like Hofstra gave me a great opportunity to start as a true freshman at a Division I school,” Heller said. “Not many wrestlers get to do that.”

Unlike the 2015-16 season-the year before he arrived at Hofstra when the most victories a true freshman recorded was eight-Heller went flying into his rookie season in 2016-17. He posted a 6-2 record to place third at 174-pounds in Binghamton’s Jonathan Kaloust Bearcat Open. A week later against stiffer competition, he went 3-3 to finish fifth at the New York State Collegiate Championships.”I felt like I was ready to be able to compete with Division I level guys, maybe not the best guys right away,” Heller states. “It’s all a learning curve coming into college.”

At 9-4 and headed into his first Hofstra dual match at the Grapple at the Garden at Madison Square Garden, he had the unenviable task of facing Cornell’s fifth-ranked senior Brian Realbuto, who would go on later that season to win his third EIWA title and earn his third All-American accolade at the NCAA Championships.

Heller would suffer a tech fall loss to Realbuto that day but bounced right back to post a close decision in the Pride’s second match of the Grapple at the Garden. That win would start a run of nine wins in the next 11 matches and include a second-place finish at the Journeymen Tussle B Tournament and a title at the Lock Haven Classic. That would boost his record to 18-7 in early January as the dual match schedule shifted into high gear. “I felt like things were coming together for me,” Heller said.

To put it in runner’s terms, the wrestling season is a marathon and not a sprint and there are inevitable peaks and valleys that will test your confidence. He would boost his record to 22-9 before he found his valley that started in a match against Columbia. “Sage’s loss to Columbia, where he was winning and trying to pin his opponent and then got pinned himself, was a turning point,” Papadatos recalled. “He started doubting himself after that match and it took him a while to get past it.”

“My attitude was that I could win matches but when I got on the mat I was putting too much pressure on myself,” Heller recalls. “It really negatively impacted my wrestling. After the Columbia match, I felt like I lost belief in myself. If you don’t believe you can win, you won’t. It took a while to gain it back.”

Heller would still finish the season with a more-than-respectable 23-17 record. “What I learned from my freshman year is that I can be tough but there is a lot of room to be tougher and improve where I am,” Heller says.

But like any good wrestler will tell you, your wrestling season is never really over as it is a 12-month, 365-day slate.  What would come next for Heller surprised even him, a chance to qualify and compete internationally for Team USA at the 20th Maccabiah Games, a competition for Jewish athletes from around the world.

“It kind of came out of nowhere,” Heller recalls. “I saw some information on USA Wrestling on how they were going to do team trials in Philadelphia but I didn’t really think much about it. Then, Coach Papadatos received an email requesting my participation to try to make the team.”

With Hofstra teammate Michael Hughes in his corner, Heller went 5-0 and beat a national qualifier in the finals in the 189 lbs./86 kg. round-robin, freestyle trials to make Team USA. The achievement perked up his spirits. “It was a few weeks after I ended the season pretty badly,” Heller said. “So it was pretty good for me to bounce back. I had never been out of the country and this would be my first international competition.”

Three months later, Heller, despite suffering a fractured radial head of the elbow and a torn UCL during the competition, recorded a 2-1 record in the 86 kg/189 lb. division at the Maccabiah Games to capture the bronze medal. He was one of the 12-man Team USA squad who all earned medals in freestyle wrestling. “It was a really cool experience,” Heller says. “I saw and got to experience a lot of different things and was able to bond with Jewish wrestlers like me.”

Heller’s sophomore year poses new challenges as he has dropped down to compete at 165 pounds this season. “It was really hard at the start of the preseason because I had to diet hard to get my body weight down,” Heller says. “I had to make that adjustment which is a lifestyle change that I have to fully commit to every day. I feel like it is going to pay off this year.”

Like wrestlers all across the country Heller’s goals remain the same, to earn conference (EIWA) and national titles and he knows what has to be done. “I am going to have to put in more time and keep getting better,” Heller states. “That includes working with the coaching staff and my strategies going into matches, cutting weight better and just learning every time I go out on the mat, win or lose. If I do that, I will be better come March.”

Heller, who has a close-knit family and is especially close to his brothers, Holden, who is a high school senior, and Reece, who is a high school junior, will have a good remedy for home-sickness as Holden, who has placed fourth twice in the Illinois State High School Championships, has signed a National Letter of Intent to join his brother at Hofstra in 2018-19. “I am really excited that Holden is coming on board for next season,” Sage says. “I think he is going to be a really good addition to the team. Holden is better than I was at his age,” Sage says. “Way better.”