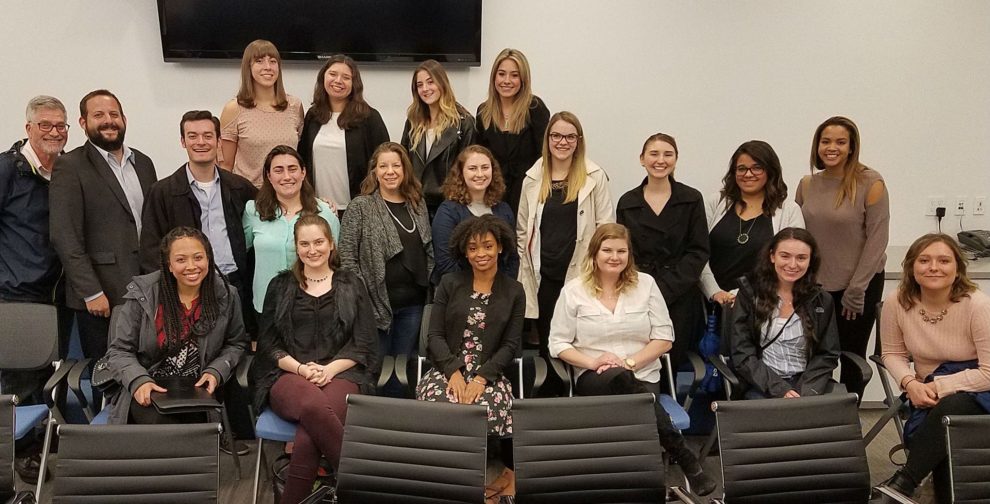 Seventeen Lawrence Herbert School of Communication students are spending 10 days traveling around Los Angeles, where they are meeting with Hofstra alumni and other industry leaders in fields such as television, film, radio, publicity, and arts and entertainment journalism.

The fourth annual “Hofstra in LA” program is connecting students with internship and career opportunities in the heart of the West Coast’s entertainment industry during a series of exclusive meetings and events from January 3-13, 2018.

“Hofstra in LA has been an enlightening experience over the past week, opening mine and my fellow students’ eyes to all the different jobs the entertainment industry has to offer. Hofstra alumni are always eager to help students further their careers, and I’m thankful I was here in Los Angeles to learn from them and experience the West Coast,” said Tara Conklin, a senior public relations major and program participant.

A highlight of the trip was a reception at the Directors Guild of America Theater Complex on Thursday, Jan. 11, which was open to Hofstra alumni of all majors. Approximately 60 people including alumni, current students, faculty, administrators, accepted students and their parents, attend the event, which was co-sponsored by Hofstra’s Office of Admission and Office of Development and Alumni Affairs.

Students also attended a panel discussion with a dozen recent Hofstra graduates who spoke about their experiences moving to L.A. They had the opportunity to break off into smaller groups to visit on their own with alumni working in casting, artist management, news production, public relations, development, event planning, and operations. They also took tours of Warner Brothers Studios, Deutsch, and PMK+BNC.

The 17 participating students, all juniors or seniors, were selected from a competitive pool of about 40 applicants on the basis of good academic standing, faculty references, and an application.

Hofstra Ranks High
From Hofstra to L.A. to…