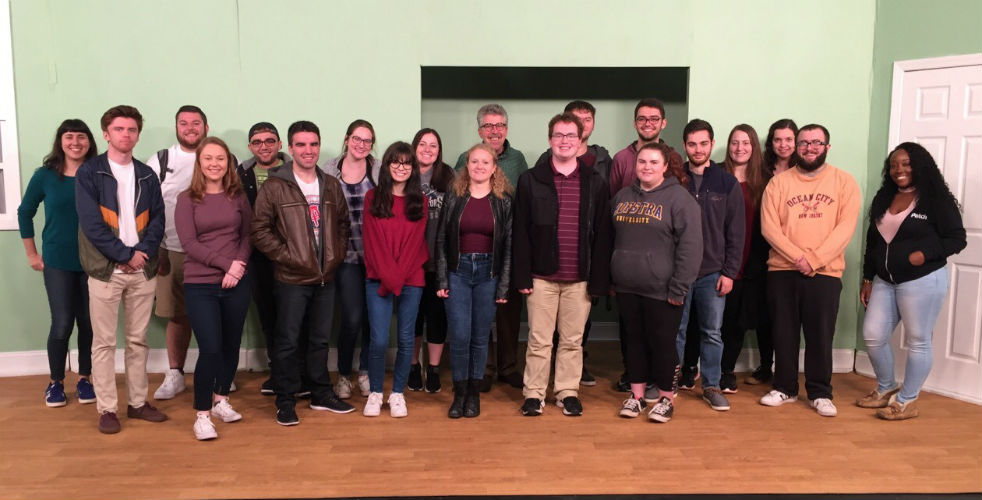 An intermediate television production class at the Lawrence Herbert School of Communication has created a YouTube series that features profiles and stories about the Hofstra community.

Called “Hof Pop: Points of Pride,” the series so far features nine videos that include closer looks at Hofstra’s new student-run music label, the Donald and Barbara Zucker School of Medicine, the ultimate Frisbee team, and the Dutchmen a cappella group. Teams of three students produced each video, incorporating interviewing, editing, lighting, and shooting skills with in-studio and field production.  Several students from the journalism program were also recruited to host the studio segments. Each feature runs about four minutes.

“In all of my previous classes, we focused heavily on production either in studio or out in the field, but this class combines these two vastly different areas together,” said Ben Detweiler ’19, a video/television and business major whose two projects included a feature on the nationally accredited Hofstra Museum. “This experience has helped me merge the skills and tricks I have in each area to create one complete packaged product.”  He hopes to do similar work professionally as he moves toward a career as a TV field producer for a news network.

Professor Doug Morrow, who teaches the class in the Department of Radio, Television, Film, was impressed by how the students took ownership of their projects, from developing how they wanted to frame the content to designing the presentation.

“This is the first semester I’ve tried something like a YouTube series within the course, and the students really embraced it and made it their own,” he said. “I fully expect the class and shows to evolve in the future.”

Though the projects were created by different groups of students, the class decided together about the elements that would give the series a sense of continuity, from the graphics and introduction to the visuals and script elements that would appear in every film.

Television production senior Heather Aleksis and her team worked on a video called “Hofstra Hero,” about 1995 alumnus James Coll, a NYC police officer and adjunct professor of history, as well as a video following the budding career of a Hofstra singer/songwriter.

“This class really taught me about some key fundamentals for TV production; I also learned a few things that are not so easy to teach in a classroom,” said Aleksis, who also serves as the graphics producer for the Herbert School’s sketch comedy show, Thursday Nite Live. “This includes scheduling, organization, time management, and also how to interact with talent and the people you are interviewing.  My group and I tried to create a professional environment even though we were a student production.”

To see all the videos in the series, visit the Hof Pop channel on YouTube.

What’s Open and Closed During Winter Break?
A Passion for Peace