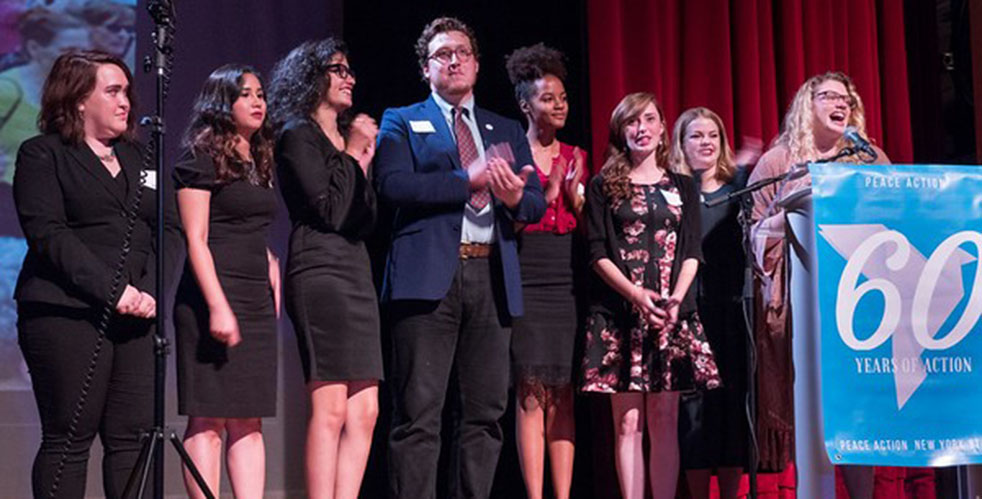 It began in September 2016 with three young women who put their passion for social justice into founding the campus chapter of Peace Action Matters.

A year later, the fledgling student group has been recognized for their work on campus and in the community by the Peace Action Fund for New York State, sharing honors with figures who have come to define activism – Harry Belafonte; LaDonna Brave Bull Allard, who helped lead the protests against the Dakota Access Pipeline; and Medea Benjamin of CODEPINK.

“I didn’t come to Hofstra for the social justice community,” said Emilie Beck ‘18, president of the group. “It’s something that happened. But now that I’ve experienced being part of a group like this, it’s become such an important part of my life.”

The students in the group come from a variety programs, all bonded by their interest in justice, diplomacy, economic equality, and the environment. Take the three founding members: Beck is a geography and global studies major, Natasha Rappazzo ’18, is political science major, and Lola Solis ’19, has a triple major in history, political science and women’s studies.

Hofstra’s chapter of Peace Action Matters is an outgrowth of the Peace Fellows Program, started by Hofstra’s Center for Civic Engagement and the community organization LI Alliance for Peaceful Alternatives to engage students in peace and social justice activities. 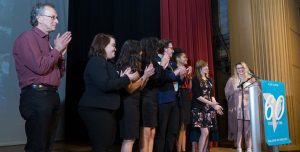 The chapter debuted in the weeks preceding the September 2016 presidential debate on campus between Donald Trump and Hillary Clinton. With the support of Hofstra Professors Andrea Libresco, Margaret and Martin Melkonian, who also serve on the LI Alliance for Peaceful Alternatives, Peace Action Matters held rallies, community dialogues, circulated petitions, and a hosted a debate-watching party on campus as their first orders of business during the fall 2016 semester.

More recently, Peace Action Matters has presented or co-hosted events for victims of nuclear weapons and nuclear testing and the rights of indigenous people. They helped collect baby items, batteries and first-aid supplies for the victims of Hurricane Irma. Along with the War Resisters League, the country’s oldest, secular pacifist organization, the group presented a nonviolent civil disobedience training workshop.

Hofstra Peace Action Matters students have also been part of statewide and national events.  Members attended the Student Peace Conference at SUNY Albany, went to the National Organizer’s Meeting in Washington DC, participated in the March on Science, the signing of the UN treaty to ban nuclear weapons and the Women’s March to Ban the Bomb.

“At Peace Action New York State, we know that grass roots mobilization doesn’t have accountability at the grass tops but at the grass roots. No one exemplifies that commitment to organizing for peace and justice more than our Hofstra University chapter,” said Kate Alexander, policy director for Peace Action Matters, at an October 13 awards ceremony, where the Hofstra group won the Don Shaffer Student Peacemaker Award.

And this is just the beginning, said chapter vice president Caroline Bowes ’20.

“If I don’t do it as a career, it will still be a big part of my life,” Bowes said of her activism. “I can’t imagine not being involved and not vocal about injustice both here at home and abroad. I will always be civic-minded.”