Most people hope they never experience a hurricane. Professor Jase Bernhardt is using virtual reality to make sure they do, as part of an experiment aimed at improving storm warnings and preparation.

“We’re trying to show that people who watch a simulation of a hurricane are more likely to respond with precautionary measures,” said Dr. Jase Bernhardt, PhD, an assistant professor in the Department of Geology, Environment, and Sustainability. “The extra layer of virtual reality will help people take warnings more seriously.”

The project, which Bernhardt has been developing for about a year, took on added urgency after hurricanes Maria, Irma, Harvey, and Jose stormed through the Atlantic this year, making 2017 one of the deadliest storm seasons in more than a century.

Participants in the project sit in what appears to be a living room, looking out of a window in the middle of a hurricane. They are surrounded by sounds of sirens, wind and rain as they watch objects fly through the air, water rapidly rising around them. They are given a survey (some participants before the experience, some after) that asks questions such as how likely they would be to evacuate if a similar virtual experience was included in a real storm warning.

“We all have an idea of what a hurricane might look like,” said sustainability studies major Ivan Bermejo, ’18, one of several students assisting Bernhardt on the project. “But virtual reality is a whole different ballpark. It allows people to jump into a new world. It’s a great tool that really enhances the world of science.”

The project is currently focused on the campus community, but Bernhardt plans to expand it to include other parts of Long Island, such as Long Beach, which suffered severe damage and flooding during Hurricane Sandy. Bernhardt and his students will head to New Orleans to present their findings of this study to the American Association of Geographers at its annual meeting in April 2018.

“We’re working to make people safer,” said geology major Angela Rienzo, ’20. “This made me realize that’s what I want to do after college. I want to have a direct impact on people.” 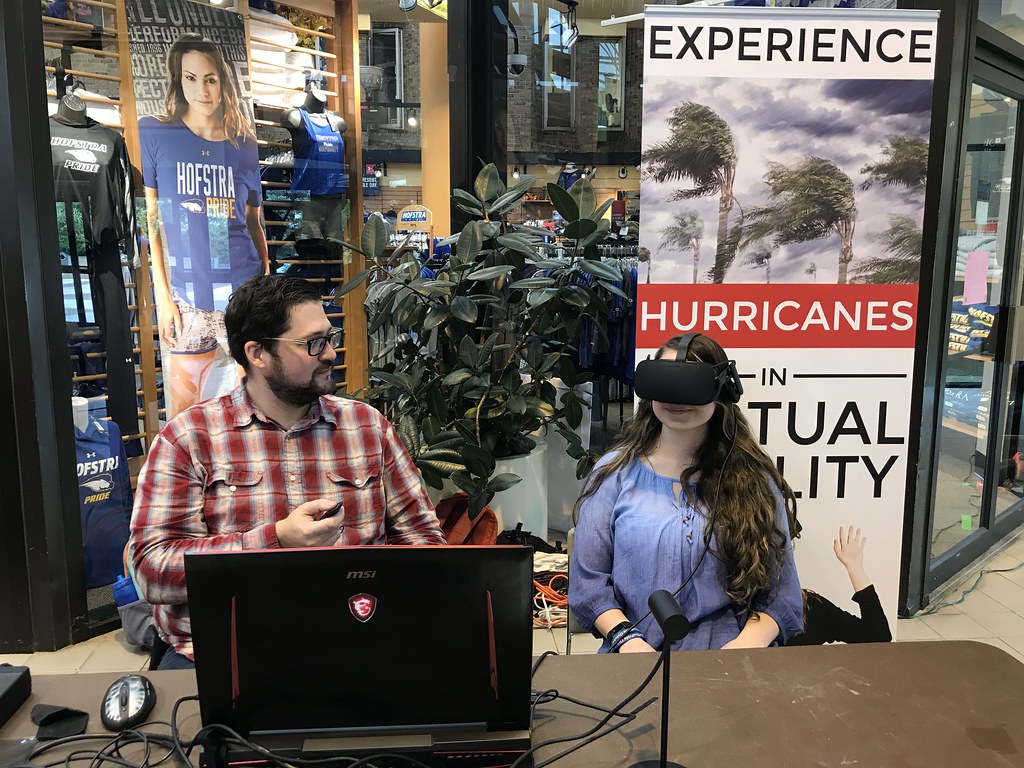 Virtual Reality simulation development was made possible thanks to: Jackson Snellings and Alex Smiros from Educational & Research Technology Services (EdTech).