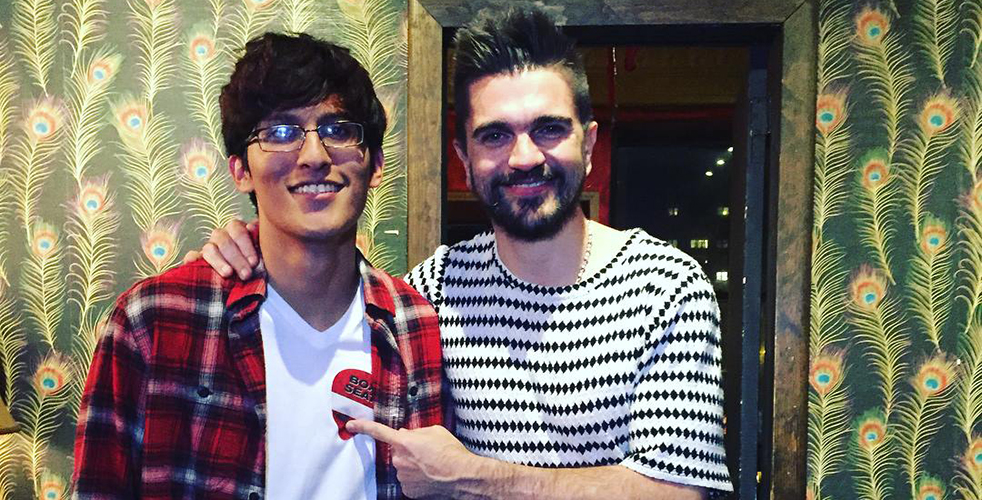 You can’t blame Zachary Carrillo ’20 for believing in destiny. After all, it’s not every music student who gets to meet their idol. Twice.

At the age of four, Carrillo was introduced to the music of Juanes, a Colombian rock musician and humanitarian and Latin Grammy Award winner who has sold more than 15 million albums worldwide.

“I fell in love with his voice,” Carrillo said of that moment he first heard “A Dios le Pido,” the lead single off  Juanes’ second album Un Día Normal.  “I fell in love with guitar and rock music. And instinctively I felt his music belonged to me, because the community I grew up in had such a small Latin population.”

When Carrillo, who grew up in Farmingdale, NY, was seven, his mother won tickets and backstage passes to a Juanes concert at Madison Square Garden. She brought her son, dressed in a concert t-shirt so big it hung to his knees.

“It was like meeting Superman,” Carrillo recalled. “I knew from that moment on that I wanted to pursue music.”

Now 19, Carrillo is a sophomore studying music business and voice at Hofstra, performing with the Hofstra Chorale and Chamber Choir and Hofbeats.

“Having this classical style of musical training helps me in many ways,” he said “My professor helps me to shape my mouth the correct way. She shows tells me where my jaw should be and how much breath I should be taking in. The training I get from classical helps me with everything I’m doing – pop, rock, punk, emo. I even sing better in the shower because of my training.”

“Ear training, music theory and music history classes – in the end they all make you a better musician,” Carrillo said. “I want to be on stage performing, telling stories through music and using music as a tool of passing on positive messages.”

This fall, more than a decade after that first meeting, fate – and a radio contest – brought Carrillo and his hero together again.

Carrillo’s sister won tickets to a private Juanes concert earlier this fall at Irving Plaza in New York City. But there was a catch – little brother Zachary was 19, and the contest required all winners to be at least 21.

So he made a videotaped plea to concert sponsors Univision and Nissan.

“This is the most important thing to me,” he told them. “Juanes as an artist has been my inspiration. … For him to hear my story, and to tell him how much he means to me would be an honor.”

The concert promoters not only waived the rules, but rolled out the red carpet for the Carrillo family. And they weren’t the only ones who watched Zach’s video. Juanes did, too, and responded in kind, taping his own video message expressing how honored he felt by Carrillo’s sentiments and extending a personal invitation to the concert.

“We were treated like VIPS,” Carrillo said. “Everyone was greeting us and shaking our hands.”

Then came the magic moment when Carrillo again came face-to-face with his idol – this time as a trained musician.

“I told him how our first meeting had given my life direction,“ Carrillo said.

Backstage after the show, Carrillo told Juanes “that he was the reason I got into music, how I’m performing in choirs, taking lessons and am studying music business in college. He promised me, ‘Whenever you are ready, send me your music, and then we’ll be on stage together.’”

Carrillo still has that over-sized Juanes t-shirt he first got as a little boy. It fits now.