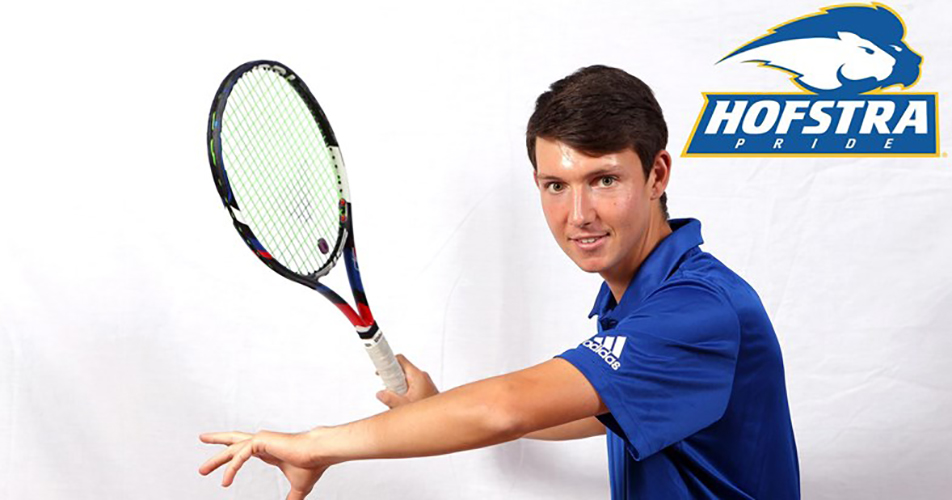 Growing up, you could say that Hofstra University senior men’s tennis player Nick Silvestri was not a big fan of music.

“As a kid I did not like music at all,” said Silvestri. “Driving in the car, I would literally tell my mom to turn off the radio. I think it was because at a young age I started playing the violin and I kind of felt that I was forced into it.”

But fast forward 16 years and music is a BIG part of the Scottsdale, Arizona, native’s life as he is an accomplished electronic dance music creator who has released multiple songs, including one track (“Turning The Tide”) last month, co-written with his collaborator Martin LeBlanc, that is included on the compilation “Solarstone presents Pure Trance Volume 6″.

Trance is a genre of electronic music that developed during the early 1990s, in Germany. It is characterized by a tempo lying between 125 and 150 beats per minute, repeating melodic phrases, and a musical form that distinctly builds tension and elements throughout a track often culminating in one to two “peaks” or “drops.” There are a variety of subgenres of trance music, with Silvestri and his musical partner focusing on the progressive and uplifting styles. “Progressive trance music is slower (128 bpm) and focuses more on percussion elements and atmospheric layers,” he explained. “‘Turning The Tide’ is progressive. Uplifting trance has more beats per minute (134-140) and focuses on melodies.”

Silvestri first discovered trance music by watching video game footage on YouTube when he was in fifth grade. “This was the first time that I found music that I enjoyed,” he said. “Once I found out what song was playing on a video I would then research more about the artist by searching on YouTube. This helped me to discover a lot more artists and genres within EDM/trance.”

When asked to explain what drew him to the music, Silvestri explained “What captivated me the most about EDM/trance was the uplifting, energizing feeling the music gave me. It was a feeling that I had never experienced before; the songs were so good that I would get goose bumps. I felt that when I listened to the music, I could accomplish anything. The music also put me in a happy place, since it’s very upbeat and the melodies are euphoric.”

Taking the leap from being a fan of the music to actually creating it was a long process. “In my freshman year of high school, I went to a Guitar Center and purchased my first midi controller,” Silvestri remembers. “I had FL Studio, which is a basic production system, and I would dabble on it here and there. But I never committed to it because every time I opened the program it was so daunting to me. When I was 18 years old, I came to New York to visit my sister and went to my first trance show – The Future Sound of Egypt 350 – at the Hammerstein Ballroom. Some of the musicians I idolized performed at that show and after that I knew I wanted to learn the program. At that point I had an Apple Macintosh computer with Logic Pro software and in order to progress at a quicker pace, I took some online classes via Skype that were taught by some of those musicians I aspired to be like.”

When he finally felt he had learned enough, Silvestri began making music on his own and released two songs on a German record label in 2015, while he was enrolled at Glendale Community College in Arizona. In 2016 Silvestri began his musical partnership with LeBlanc as the two met in the Anjunabeats online forum. “Anjunabeats is a production forum where you can post songs and people can comment on them,” he said. “I was following another member (LeBlanc) and he posted asking if anyone was interested in collaborating. I agreed, since I thought we were at the same skill level and that we could learn a lot from each other.”

The two, who have never met in person and communicate through Skype and share music via DropBox, began working together in March 2016 and completed their first song, “Move 78” in early October of that year. “We submitted it to Go On Air Recordings and there was an online voting process. We were one of the top five vote-getters and ‘Move 78’ was released by the label, which is run by one of the top trance DJs, Giuseppe Ottaviani, on the ‘#HotOrNot Most Wanted Volume 6 Collection’.” In addition to “Turning The Tide”, the pair has completed a song entitled “Persuasion” that will be released in January.

The story behind “Turning The Tide” is interesting and showcased the drive that Silvestri has. After completing work on the song, a producer in Arizona, Forerunners, recommended that they submit the song to Pure Trance, which is run by trance DJ Solarstone. “So we had the song professionally mastered, and I went to a Solarstone show at the Cielo in New York City,” Silvestri said. “After the show I managed to meet him and gave him the song on a flash drive. I was very surprised three days later when he emailed me and said he would love to sign us if we made some changes to the song. So from March to June 2017, Martin and I went back and forth to make the changes and sent the song back to Solarstone but we had no idea that it would be included in this compilation.”

Silvestri’s fans include his teammates, as his songs are often played by them in the locker room and on road trips. “Nick’s music is something else,” said teammate Marcus Smith. “The genre is not necessarily my taste but his songs are different. They bring an energy that is hard to describe. We listen to Nick’s songs before matches to get pumped up.”

As for his future in music, Silvestri has no illusions of grandeur. “Maybe in the future, I will look to DJ,” he said. “Trance music is becoming more popular, but for now it is just a hobby. I would like to keep working with Solarstone and Pure Trance.” Silvestri does plan on pursuing a career in finance after he graduates in May. “My career goal is to work with investments,” he said. “I would like to day trade on my own, but I also like to help others with their financial investments. So maybe becoming a financial advisor is something I may pursue in the future.”

While music is a hobby for now, it is one that requires a great deal of commitment. “It takes Martin and I about six months to finish one song,” Silvestri said. “It is difficult to balance school, tennis and music, and I have not really worked on anything since the summer. But after exams, I plan to start working on something new. Even if it is just for a half hour, I find that it is a big stress reliever for me. It puts me in a happier mood because I know what I am doing is what I am passionate about.”