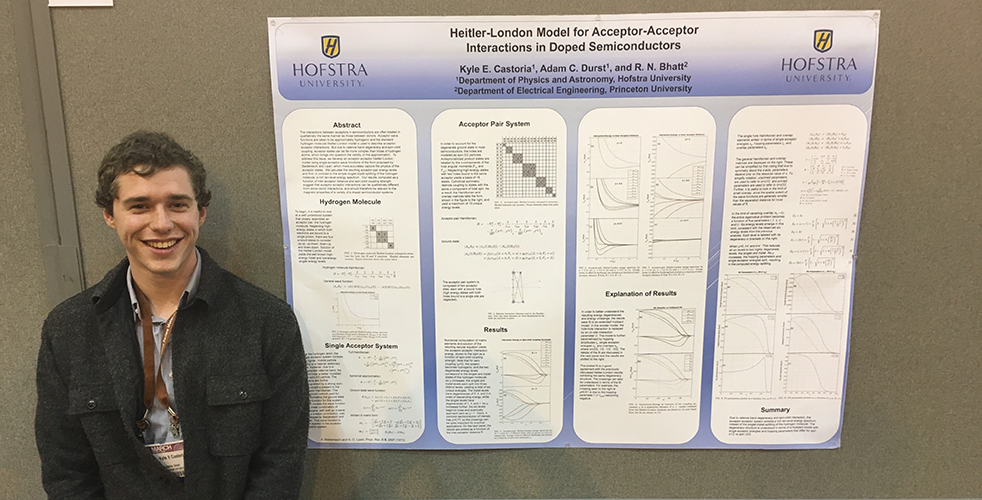 A physics professor and one of his students collaborated on research investigating the magnetic properties of semiconductors, a project that could help advance work to develop a large-scale quantum computer.

Kyle Castoria ’17 and Associate Professor of Physics Adam Durst published a paper about their findings in the prestigious physics journal, Physical Review B. The paper was based on Castoria’s honors undergraduate physics research, for which he was awarded departmental high honors last spring. The research was inspired by an unfinished aspect of Dr. Durst’s own undergraduate work, which he began more than two decades ago at Princeton University.

In order to better understand the magnetic properties of semiconductors, Durst and Castoria used the techniques of quantum physics to study the interactions between acceptor atoms – those that can bind or accept electrons. “The goal of the research was the development of a model for the interactions between acceptor atoms in semiconductors that takes into account spin-orbit coupling and the degeneracy of the valence band,” Durst explained. Their results are applicable to ongoing efforts to develop a quantum computer, which would theoretically be able to perform certain tasks much faster than regular computers.

The complexity of their research required significant computational resources. When Dr. Durst first worked on the project 21 years ago, the technological limitations reduced his results to a few data points.

Today’s faster computers, coupled with Castoria’s computer programming expertise, inspired Durst to revisit his college project. “Kyle is an extraordinary student and an expert coder. He understood every part of the research, backward and forward.”

For Castoria, the project offered a challenge unlike anything he’d tried before.

“Being able to work on a problem that was of a larger scale than stuff typically encountered in classes was at first intimidating but much more rewarding to work through,” he said.

After working with Dr. Durst to derive all necessary calculations, Castoria wrote computer code in the Python, Matlab, and C++ programming languages. He then parallelized the code so it could efficiently run in the Hofstra Big Data lab. When that part of the project was completed, the computation ran 50,000 times faster than Dr. Durst’s original in 1996.

Dr. Durst and Castoria took their results to Princeton University where they consulted with Durst’s undergraduate advisor, Professor Ravin Bhatt. The three collaborated on the publication of the paper. Castoria also presented the results as a poster at the 2017 March Meeting of the American Physical Society in New Orleans as well as at Hofstra’s 2017 Undergraduate Research Day.

“It was nice that I was hopefully able to give Dr. Durst some closure on his unfinished work from when he was an undergrad,” Castoria said. “And it was surreal to have our work published in a research journal – an experience I will hopefully get to have again while in graduate school.”

And even though their research project is complete, Castoria is still following in Durst’s footsteps. He started a PhD program in electrical engineering this fall. At Princeton.

Praise for “This is The Place”
School of Ed Launches Journal