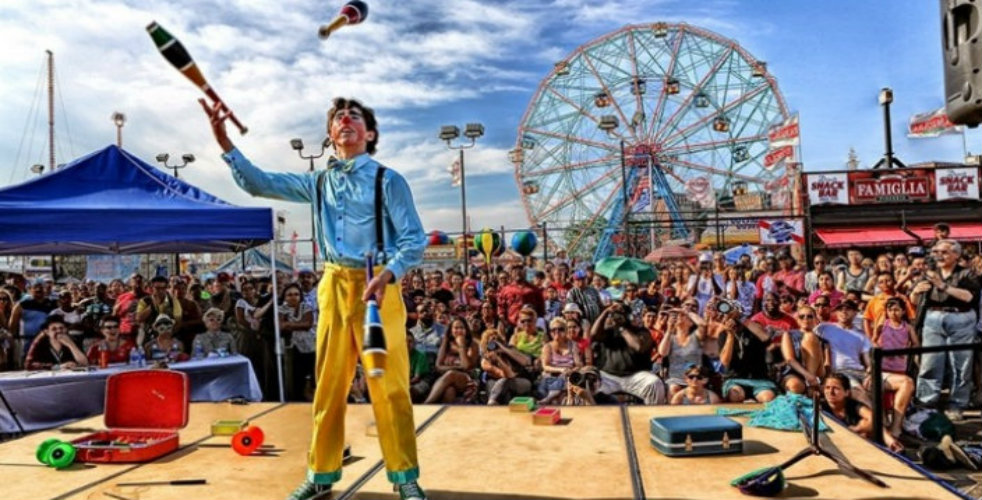 Hofstra Mechanical Engineering major Matthew “Phineas” Lish is back on campus and gearing up for a new, one-man show after touring as a clown with Ringling Bros. Circus Xtreme.

Presented by the Hofstra University Honors College and Circus Bicuspid, The Intellectual Idiot will be held on Friday, November 17 at 7:30 p.m. in the Guthart Cultural Center Theater. The show will explore the intellectual side of  the circus through dangerous juggling stunts, physics demonstrations and stories from the Ringling road. 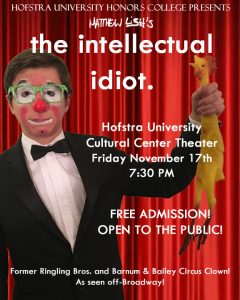 “My time during the historic Final Farewell Tour of the circus was packed with wonderful experiences that helped me grow bothas a performer and as a student,” said Lish. “I’m taking everything I learned from The Greatest Show on Earth and applying it to this show – just scaled down from a 30 thousand-seat arena. I’m excited to bring a little bit of the circus to Hofstra, and am ready for an evening that I can only describe as intellectually idiotic.”

Lish, who comes from a family of clowns, promises an unforgettable and hysterical evening, where he plans to break the “golden rule” of magic, revealing the secret behind one of his favorite tricks. His father, Bruce, aka Dr. Molar Magic, also has a role in this production, having designed the magic effects that Lish will perform throughout the night.

During his time on the road, Lish lived on the world-famous Ringling Bros. and Barnum & Bailey Circus train. His duties included performing in the pre and main shows; participating in various publicity events; and conducting community outreach, including making hospital and schools visits. The opportunity was made possible by Honors College deans Lauren Kozol and Warren Frisina, who worked with Lish to ensure he could take the time to pursue his dream and then return to Hofstra to complete his studies.