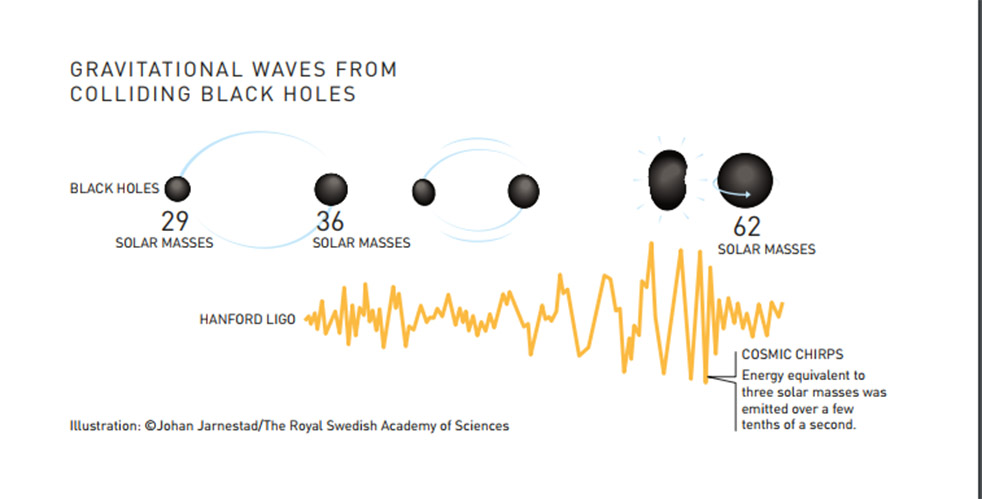 Dr. Brett Bochner, professor of physics and astronomy, contributed to research that won the 2017 Nobel Prize for Physics while he was a graduate student at MIT in the mid-1990s. He also served as a Hofstra-based consultant for several years afterwards.

Dr. Rainer Weiss of the Massachusetts Institute of Technology (MIT), recipient of the Nobel Prize – shared with Dr. Kip Thorne and Dr. Barry Barish of Caltech – was Dr. Bochner’s PhD adviser for more than five years. They served as collaborators in the LIGO (Laser Interferometer Gravitational-wave Observatory) Project.

The main focus of Dr. Bochner’s research was modeling the Dual Recycling configuration of the Advanced LIGO detector, which succeeded at detecting Gravitational Waves (GWs) almost immediately after being turned on in 2015.

Asked to recall his experience working with Dr. Weiss, Dr. Bochner said, “He was an experimentalist, with a single-minded focus on this project. He demanded that his students work very hard and work independently.”

“I knew from the beginning that the detection of gravitational waves was inevitable,” Bochner said. “And this team was so determined, so focused. I didn’t know it would take 25 years from the time I started with them, but I’m not at all surprised that they have achieved this kind of recognition.”

LIGO is a laser-based system for detecting ripples in the fabric of space (GWs), predicted by Albert Einstein precisely 100 years earlier. The first LIGO detection was of GWs emitted by a collision of two Black Holes over 1.3 billion light-years away. This conclusively proved the existence of GWs, as well as the existence of black holes themselves.

To date, LIGO has detected at least four such merging black hole binary systems, one (recently announced) merging Neutron Star binary system, with many new types of discoveries anxiously anticipated. “Gravitational Wave Astronomy” represents an entirely new way for observing the most violent events in space and for broadening our knowledge of the universe.

From the inception of LIGO to its celebration with the Physics Nobel Prize, this project has endured 45 years of development, involving almost 1,000 researchers from more than 20 countries, including Hofstra’s own Dr. Bochner.

“Working on the LIGO taught me to become very independent with my own research,” said Bochner, who is currently working on his own science research programs here at Hofstra. He is studying the reasons why it appears the universe is accelerating and not decelerating, and if this can be attributed to a
theorized cosmic substance referred to as dark energy, or to some alternative mechanism.