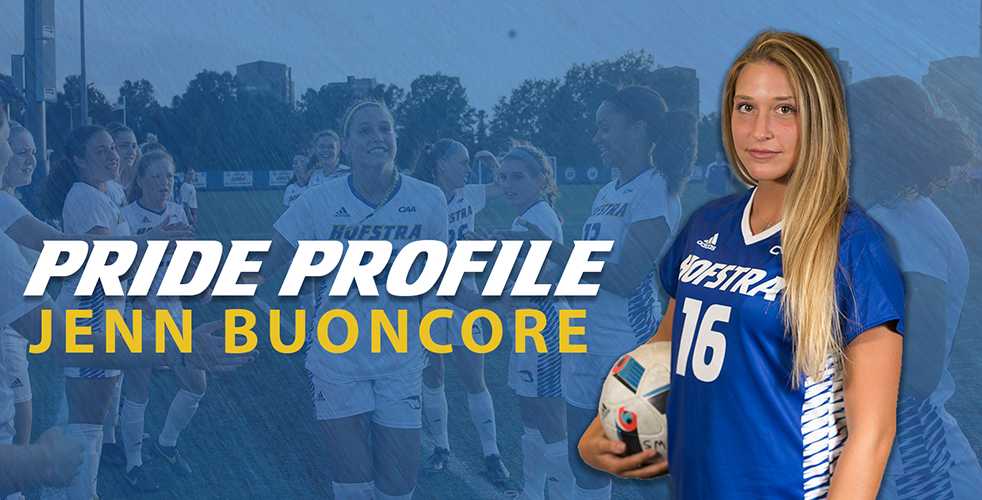 After just missing the Colonial Athletic Association Tournament a season ago, the Hofstra Women’s Soccer team was the first team to clinch a playoff berth this season. The Pride then took it a step further, earning the CAA regular-season title outright with a week still remaining in the season.

A major difference between the 2016 team and this year’s side? Jenn Buoncore.

An impact-maker as a freshman on the Pride’s roster in 2015, Buoncore was named to the CAA All-Rookie team, finishing that season with two goals and five assists. A high achiever in the classroom as well, the biology major stepped away from soccer as a sophomore to focus on her academics, with aspirations of getting into medical school.

But Buoncore couldn’t stay away from the pitch. “After always coming to the games last year, I would always miss it,” she said. “It was always in the back of my head, coming back, but I wasn’t sure. Then I talked to [Head Coach] Simon [Riddiough], and he welcomed me, saying ‘The door is always open.'”

Growing up with three older sisters in Kings Park, northeast of Hofstra on Long Island, Buoncore was always brought along to the soccer field to watch her sisters play. She first began playing herself at age 4 and started to get serious about the game in middle school, competing on travel teams. It was then that she realized playing collegiate soccer could be a goal of hers, and that aspiration became even clearer as she continued to develop her skills in high school.

Buoncore played four years of varsity soccer at Kings Park High School, earning three all-county nods from her sophomore to senior seasons. She scored 12 goals in each of her final two campaigns for a total of 40 career goals, earning all-state, all-region and All-Long Island honors as a senior as well.

With such an impressive resume, Buoncore unsurprisingly had a number of college coaches recruiting her. But being from Long Island, Hofstra wasn’t even on her radar at first. “I didn’t even consider Hofstra until I visited the campus,” said Buoncore. “But then when I visited, it doesn’t even feel like you’re on Long Island. It feels like a home away from home because I’m still close.”

Buoncore made the transition from high school soccer to the collegiate game appear seamless. “It wasn’t that easy,” Buoncore laughed. “But definitely the coaching staff and the players were very welcoming. The seniors as well as everyone else on the team took me under their wing and really just made it more comfortable and easier to play with them.”

And that 2015 team was a special one. With Buoncore’s help, the Pride went 13-6-2 overall and 7-1-1 in CAA play, earning the conference’s regular-season title. After a heartbreaking double-overtime loss to James Madison in the CAA semifinals, the team earned an at-large bid to the NCAA Tournament. Hofstra battled a tough Georgetown team in the first round, toppling the Hoyas in penalty kicks to advance to the second round, where Hofstra eventually fell to ninth-seeded Rutgers. In addition, Buoncore played alongside Hofstra all-time points leader Leah Galton in Galton’s final season. Galton was then drafted by Sky Blue FC of the National Women’s Soccer League.

Buoncore’s first semester at Hofstra was not only memorable on the soccer field – she also posted a perfect 4.0 grade-point average to land on the Provost’s List.

After then spending the fall of her sophomore year in the stands and watching the team come up just short, Buoncore rejoined the Pride for a couple of its spring practices. “After that, I realized how much I truly missed it,” said Buoncore. “I didn’t want it to just end there.”

But returning to a Division I team after taking a year away from the soccer field is no easy task, and Buoncore knew she had a lot of work ahead of her.

“Not playing meant I was a year behind most people,” she said. “So I knew I was going to have to put in the effort and put in extra time to try to gain a year’s worth of experience. So I would train twice a day, run every day, and just tried to do everything to make myself the best player I can be, because I knew it wasn’t going to be easy.”

Riddiough noted that Buoncore came back incredibly fit and confident. “It’s been great having Jenn back,” he noted. “She’s so incredibly talented in all aspects of the game. We really missed her play last season, and she’s most certainly been a factor in our success this season.”

Buoncore has been a force to be reckoned with on the Hofstra offense in 2017, finishing the regular season second on the team with 12 points on four goals and four assists in helping the Pride go a perfect 9-0 in CAA play and end the regular season on a 10-game win streak.

So far, in two seasons with the Pride, Buoncore has two CAA regular-season championships to her name. But she doesn’t want to stop there.

“I just want to keep contributing, putting in work, and help the team win the CAAs and get the ring,” said Buoncore.