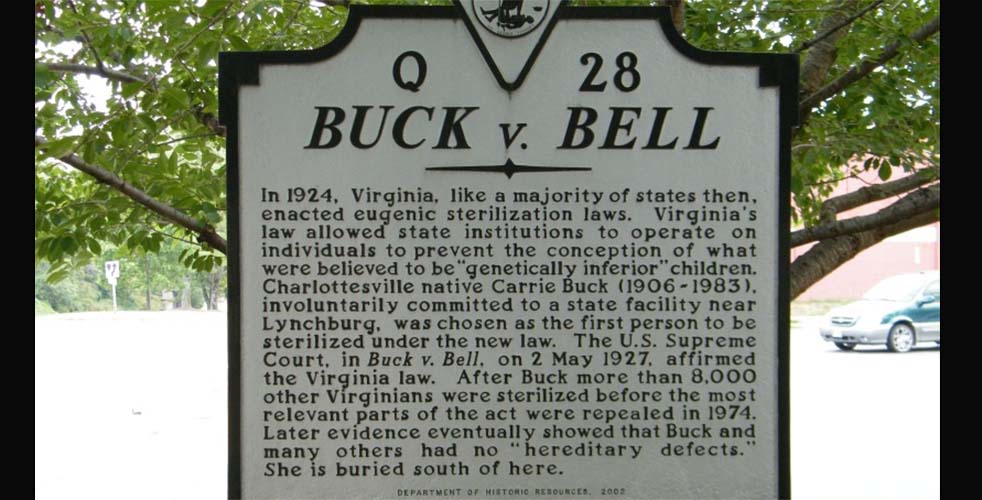 October 2017 marks 90 years since the Buck v. Bell ruling, where the United States Supreme Court upheld the forced sterilization of the “feebleminded.” To mark the tragic outcome of this case, Hofstra’s English Department, the Disability Studies Program and the Hofstra Cultural Center are presenting a program featuring Molly McCully Brown, author of The Virginia State Colony For Epileptics and Feebleminded, and legal historian Paul Lombardo, author of Three Generations, No Imbeciles. Buck v. Bell set the stage for more than 60,000 involuntary sterilizations in the United States, and it was used as a defense of the Nazi sterilization experiments at the Nuremberg trials.

The discussion at Hofstra will take place on Thursday, October 26, from 2:20-3:45 p.m. at the Plaza Room Middle at the Mack Student Center.

Molly McCully Brown won the 2016 Lexi Rudnitsky First Book Prize for The Virginia State Colony For Epileptics and Feebleminded, named for the residential hospital in which Carrie Buck, the plaintiff in Buck v. Bell, was an inmate. Raised in rural Virginia, Brown’s poems and essays have appeared or are forthcoming in Gulf Coast, Ninth Letter, Pleiades, Kenyon Review, Image, Colorado Review, TriQuarterly Online, The Rumpus, Meridian, and elsewhere. She has been the recipient of fellowships and scholarships from the Civitella Ranieri foundation, the Sewanee Writers’ Conference, and the University of Mississippi, where she was a John and Renée Grisham fellow. Brown is the 2017-2018 Jeff Baskin Writers Fellow at The Oxford American magazine, where she is at work on a collection of essays about disability, poetry, religion, and the American South.

Paul Lombardo is the 2009 Georgia Author of the Year Award for Creative Nonfiction History. The title of his book came from Justice Oliver Wendell Holmes Jr.’s nefarious declaration on the Buck v. Bell case: “Three generations of imbeciles are enough.”

Carrie Buck, involuntarily institutionalized by the State of Virginia after she was raped and impregnated, challenged the state’s plan to sterilize her in 1924. Having already judged her mother and daughter mentally deficient, Virginia wanted to make Buck the first person sterilized under a new law designed to prevent hereditarily “defective” people from reproducing. Lombardo’s more than 25 years of research and his own interview with Buck before she died demonstrate that she was destined to lose the case before it had even begun. Buck’s lawyer was a founder of the institution where she was held; he called no witnesses on her behalf. And every judge who heard her case – on the state level through the Supreme Court – was an advocate for the eugenics movement.

Age of Aquarius: “Hair” Nov. 3-5
Is Peace Possible Between Catalonia and Spain?